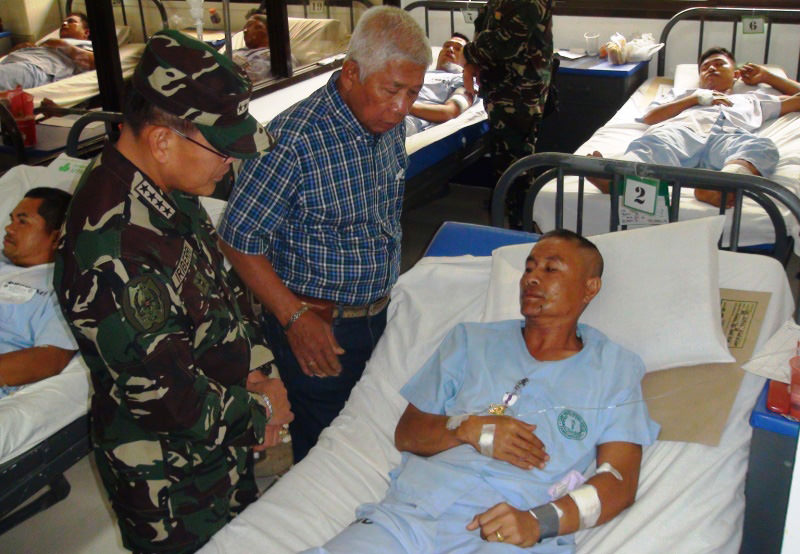 A Filipino offensive against the extremist Abu Sayyaf group has left 18 soldiers and five fighters dead in the worst violence in the troubled south this year. Filipino authorities pledged to destroy the extremist group

Defense Secretary Voltaire Gazmin and top military officials flew to the south to meet most of the 53 soldiers who were wounded in fighting with Abu Sayyaf militants that raged for nearly 10 hours Saturday in the hinterlands on Basilan Island. At least five militants, including a Moroccan fighter, were killed, the military said.

The large number of casualties was reported as the Philippines marked the Day of Valor Saturday to remember Filipino veterans who died in World War II. "After we grieve for our soldiers, we shall continue the fight," Gazmin and the military said in a joint statement.

Army chief Lt. Gen. Eduardo Ano said the military aims to "finally destroy the Abu Sayyaf, especially now that we have found the exact location of the group." A major offensive on Saturday targeted Abu Sayyaf commander Isnilon Hapilon, who has publicly pledged allegiance to Daesh and has been hunted for years for his alleged role in several terrorist attacks, military officials said.

Washington has offered a reward of up to $5 million for information leading to Hapilon's capture and prosecution. The Abu Sayyaf militants, however, managed to reinforce their ranks as the fighting dragged on. While scouring a rebel area, the troops were met by heavy weapons fire and hit by explosions that may have been caused by bombs, Ano told reporters.

Among the slain militants was a Moroccan identified as Mohammad Khattab and a son of Hapilon, Tan said, adding that about 20 other gunmen were wounded.

Khattab, a bomb-making expert, had been in the Philippines for about three years and was trying to link up the Abu Sayyaf with Middle Eastern terrorist organizations possibly including the Daesh group, Ano said.

While the Abu Sayyaf has been considerably weakened by more than a decade of U.S.-backed Filipino offensives, the large number of military casualties Saturday underscores the militants' resilience and the complexity of addressing the decades-long security problems in the south, homeland of minority Muslims in the predominantly Roman Catholic Philippines. Last year, 44 police commandos were killed in clashes with various insurgent groups in southern Mamasapano town while on a covert mission that was fraught with faulty planning and execution but nevertheless killed a top Malaysian terror suspect.

Outrage over the police deaths stalled a peace deal with the Philippines' largest insurgent group, some of whose fighters got entangled in the fighting.

The Abu Sayyaf was founded in 1991 in Basilan, about 880 kilometers (550 miles) south of Manila. With an unwieldy collective of preachers and outlaws, it lost its key leaders early in combat, sending it on a violent path of extremism and criminality. Since 1991, the Abu Sayyaf - armed with mostly improvised explosive devices, mortars and automatic rifles - has carried out bombings, kidnappings, assassinations and extortion. It has been also blamed for the country's worst terror attacks, including a 2004 Manila Bay ferry bombing that claimed 116 lives.

The United States and the Philippines have separately blacklisted the Abu Sayyaf as a terrorist organization for deadly bombings, kidnappings and beheadings.

The brutal group has been blamed for a spike in kidnappings for ransom in recent weeks. An Abu Sayyaf faction freed a former Italian missionary on Friday after six months of jungle captivity on southern Jolo island. The Abu Sayyaf threatened to behead one of two abducted Canadians and a Norwegian if a huge ransom was not paid, but there has been no sign of the fate of the hostages after the deadline expired on Friday.