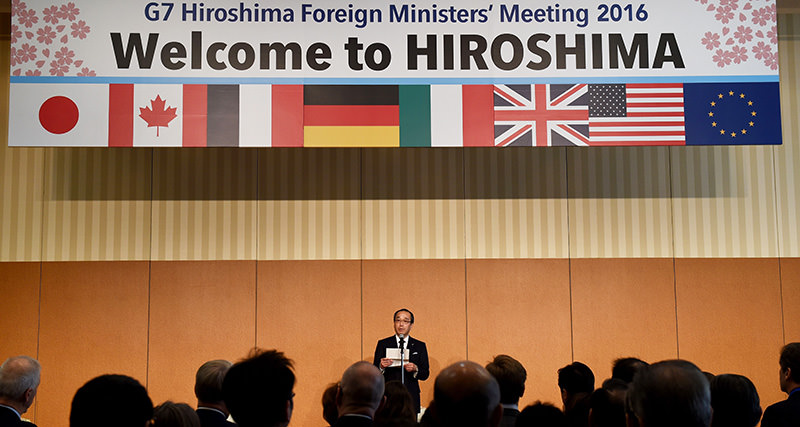 by Apr 10, 2016 12:00 am
Foreign ministers of the Group of Seven (G7) of top industrialized nations started two days of talks on terrorism, nuclear disarmament and maritime security in the western Japanese city of Hiroshima Sunday.

The meeting comes amid increasing tension over North Korea's nuclear programme and China's increasingly aggressive claims to nearly all of the South China Sea.

"I hope that a strong message of peace, stability and prosperity will be sent out to the world at the Hiroshima G-7 foreign ministers' meeting," Japanese Foreign Minister Fumio Kishida said.

He said he hoped the meeting would be an opportunity "to send out a strong message toward a world without nuclear weapons" as it is being held in Hiroshima, a city devastated by the US atomic bombing in 1945.

The leaders of the G7 nations will hold a summit meeting in late May in Mie prefecture, central Japan. The bloc groups Britain, Canada, France, Germany, Italy, Japan and the United States.

North Korea claimed Saturday that it had carried out successful ground tests of a new engine for its intercontinental ballistic missiles, improving the range of its nuclear deterrent.

Also on Saturday, Paris terrorism suspect Mohamed Abrini confessed to being the fugitive third attacker at the Brussels airport last month, Belgian prosecutors said a day after his arrest.

Abrini was seized alongside five others as part of the investigation into the suicide attacks on March 22 at the airport and a Brussels underground station that killed 32 people.
Last Update: Apr 10, 2016 10:30 am
RELATED TOPICS