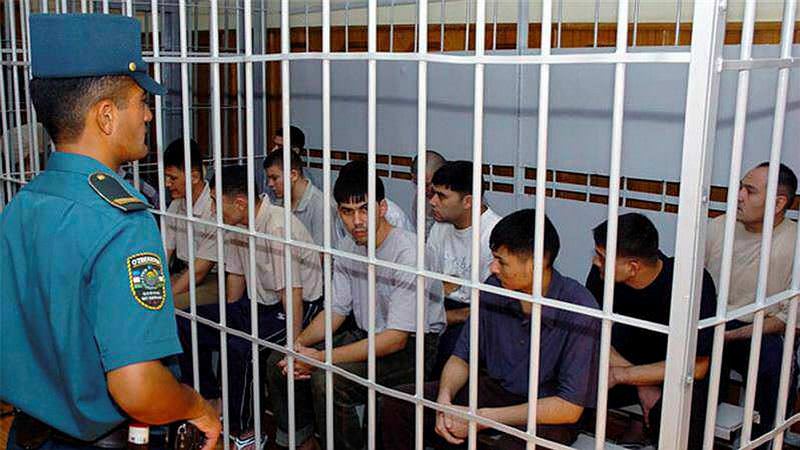 Muslims convicted of anti-government activity are regularly tortured and often die in Uzbek jails, the report says.
by Cihangir Yıldırım Apr 12, 2016 12:00 am

The Uzbek government continues to suppress religious communities and even individuals under the pretext of combatting extremism with crackdowns that have lead to human rights violations, a report revealed

The Uzbek President Islam Karimov's restrictions on devout Muslims continue under the pretext of combating extremism, a report by a rights' group indicates. On April 8, the doors of the Minar mosque, a 2,400-occupant capacity place of worship, were locked before the Friday prayer in the Uzbek capital of Tashkent. According to Azadlıq Radio, worshippers had to perform Friday prayer outside of the mosque. "Officers closed the mosque's doors just 15 minutes before prayer time so we had to perform the Friday prayer on the streets," a witness told Azadlıq Radio. Uzbek officials did not make a statement regarding the incident.

According to Norway-based human rights' group Forum 18, the Uzbek authorities impose harsh restrictions on the distribution of religious materials into and out of the country, not only on paper but via mobile phones, tablets, personal computers, memory sticks and other electronic devices and media sources. Two Muslim men, Zuboyd Mirzorakhimov and Zoirjon Mirzayev, are serving five-year prison terms for downloading the Quran and various sermons onto their mobile phones with many people now fearing the two could face torture while in jail. In January 2014, the Uzbek Cabinet handed down a decision which restricts religious sources by requiring the State Customs Committee and the State Borders Protection Committee to seize all religious materials that are imported to the country before being sent for "expert analysis" to the Uzbek Religious Affairs Committee. Only upon approval by the committee are such materials allowed to be handed back to travelers, Forum 18 revealed.

Forum 18, which mainly focuses on rights' regulations in Central Asian countries, generates reports on religious freedoms which are widely used by international organizations such as Amnesty International, U.S.-based Human Rights Watch (HRW) and the Organization for Security and Cooperation in Europe (OSCE).

The Uzbek government continues to impose repressive control over human rights' activists. A prominent human rights defender Dmitry Tikhonov was forced to flee Uzbekistan, going to Berlin where he requested political asylum in early April 2016. According to HRW, Tikhonov has documented evidence of forced labor in Uzbekistan's cotton fields. In September 2015, Tikhonov was detained and beaten by the Uzbek police. "Human rights monitors should be able to work without being beaten and carried off to jail," Steve Swerdlow, a Central Asia researcher at HRW, said.

Cotton is often referred to as Uzbekistan's "white gold" because it is a highly profitable industry for the country. Uzbek officials have been criticized for decades by human rights and labor rights groups on its forced labor system. For years, over a million people each year, including children, teachers, medical workers, college and university students, and public employees are forced to pick cotton by the Uzbek government. It uses coercion, including intimidation and threats of being denied employment, social welfare benefits, utilities, expulsion, and even prosecution as a coercive means to force people into the fields, the HRW report revealed.

German Foreign Minister Frank-Walter Steinmeier, who is also the chairman in office of the Organization for Security and Cooperation in Europe (OSCE), warned Uzbek officials and called for reform of the human rights crisis in the country after his visit to Uzbekistan on March 30.

Islam Karimov, a former communist official who is known for his repressive and dictatorial policies, tolerates no political opposition and cracks down on civil and human rights groups as well as the independent media. A conviction triggers a string of arrests, interrogations, and further convictions of family members, neighbors, friends and business partners. Suspected Muslims are routinely extradited or kidnapped by Uzbek security agents from Russia and other ex-Soviet states, even though some have changed their citizenship and asked for asylum.

Muslim Uzbeks convicted of anti-government activity are regularly tortured and often die in Uzbek prisons. HRW said that Uzbek prison authorities routinely beat prisoners and use electric shock, asphyxiation and sexual humiliation to extract information and confessions from inmates. Muslim prisoners have even been tortured for praying. At least 23 people were tortured to death in prison in 2014, HRW said in its 2014 report. According to another forensic report by the British Embassy, two prisoners were boiled to death. The U.N. Committee Against Torture has said that torture is carried out "systematically" by law enforcement officers in Uzbekistan's police stations, prisons and detention facilities run by the National Security Services (SNB).

The Initiative Group of Independent Human Rights Defenders (IGHRD) said that at least 300 Muslims have been arrested and convicted of "religious extremism" in 2015 alone. Most of those incarcerated are abused, tortured, and had their prison terms extended for the slightest violation of prison rules, the human rights group says. The actual number could be much higher because victims' families fear contacting human rights groups or independent reporters. Surat Ikramov, the founder and chairman of IGHRD, said that in some prisons, jailed Muslims are prohibited from praying and reading the Quran and forced to sing the national anthem of Uzbekistan. At least 12,800 people have been imprisoned since 2002 in Uzbekistan on trumped-up charges, with many facing torture, IGHRD reports said.

The regime's crackdown on Muslims, considered radical by opposition figures and businessmen, makes Uzbekistan one of the world's most repressive countries. In 2015, Uzbekistan was included in Freedom House's "The Worst of the Worst: The World's Most Repressive Societies." The International Helsinki Federation for Human Rights (IHF) and HRW asked the U.N. Human Rights Council in Geneva to continue monitoring human rights in Uzbekistan, but the U.N. council is considering ending their observation.
RELATED TOPICS