Australian village, including 35 Highland cattle, listed for sale for $10 million 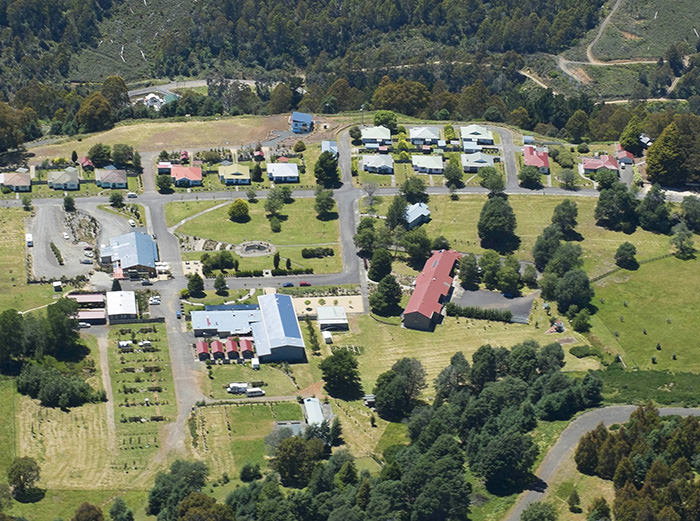 This undated handout photo from real estate company, Knight Frank Tasmania and recieved on April 14, 2016 shows an arial view of Tarraleah village in Tasmania (AFP Photo)
by Apr 14, 2016 12:00 am

A small, picturesque Australian village has been listed for sale, attracting interest from China and Singapore, with its new buyer set to own dozens of homes, a lake full of fish and 35 Highland cattle.

Property agents said they hoped the 145-hectare (358.3-acre) Tarraleah village in the heart of Tasmania state would fetch up to Aus$13 million (US$10 million).

"I've never sold a town before," property agent John Blacklow, who has been selling hotels for more than three decades, told AFP.

Since the village was placed on the market late last week, it has attracted prospective buyers -- individuals as well as companies -- from Australia and also China, Hong Kong and Singapore, Blacklow said.

The village in the Central Highlands was originally built in the 1920s and '30s to support 2,000 hydroelectric workers, but as the dams and power stations servicing southern Tasmania became automated, staff were no longer required.

Property developer Julian Homer eventually bought the entire village, which had become run down, restoring the art-deco buildings to turn it into a tourism-focused site.

"He's finally finished his programme of renovation, which has taken him 13 years, so the whole of the town -- all the 33 buildings and infrastructure -- have been done up to a very high-class standard," Blacklow said.

"Now it's ready for an operator to actually take over and continue the operations as a tourism village for accommodation, mainly."

Tarraleah, which agents said brings in an annual revenue of Aus$2.1 million, currently has no permanent residents, only tourism-related staff.

Visitors can fish at a lake with trout and salmon, go bushwalking, play golf, have a drink at a bar and stay in cottages -- while enjoying the company of ducks, geese and native animals such as kangaroos, wallabies and Tasmanian devils.

Former resident Ingrid Mitchell, who lived in the village in the 1960s when her father worked at the station, said she was "very sad" to hear Tarraleah was for sale and wanted it to remain in local hands.

"It was a thriving community, we had a normal butcher, shopping centre, the school was always busy, the post office, the swimming pool," she told the Australian Broadcasting Corporation.

"We used to have a Christmas party at the hall every year -- great times."

The sale of residential property and farmland to foreigners, including Australia's largest trading partner China, is a sensitive issue, with Canberra knocking back some sales on national interest grounds.