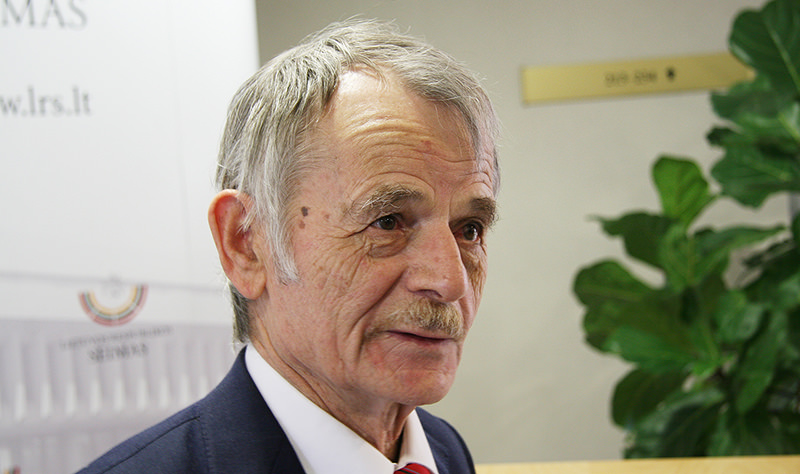 A Russia-backed prosecutor in Crimea suspended the Mejlis of the Crimean Tatar People Wednesday to "prevent violations of the federal laws".

Addressing the World Crimean Tatar Congress in the Lithuanian capital Vilnius on Thursday, Kırımoğlu termed the move a "declaration of war".

Later, in an interview with Anadolu Agency, Kırımoğlu, who is a former Mejlis head and member of Ukrainian parliament, said "[Russia] considers us an extremist terrorist group...to suspend our Mejlis means suspending all Tatar people".

He said the Russian media launched a smear campaign against Tatar leaders and institutions adding that human rights violations were on the rise in the annexed region, saying police raids on people's homes were becoming part of normal life.

Kırımoğlu called for sanctions to end the occupation of Crimea. "The most prudent way is sanctions which should remain in force until the occupant country [Russia] has retreated," Kırımoğlu said.

On Feb. 15, Russia-backed prosecutor, Natalya Poklonskaya, filed a lawsuit at the Crimean High Court to recognize the Tatar Mejlis as an extremist organization and demanded its closure. The first hearing was held on March 3, and since then the case examination has been postponed four times on various grounds.

"This decision, taken in the context of the ongoing court case aiming at banning its activities as an extremist organization, must be reversed immediately," read a statement released Thursday by the office of EU High Representative for Foreign Affairs and Security Policy, Federica Mogherini.

The statement also recalled the "illegal annexation [of Crimean peninsula] by the Russian Federation in 2014," adding: "The EU reiterates its call for full compliance with international human rights standards and other obligations under international law."

"We regard the lawsuit as a new link of the oppression and suppression acts of the existing authorities in the peninsula towards Crimean Tatars, who are the primary components of Crimea."

He said Turkey would continue "to support-under all circumstances-the protection of the legitimate rights and existence of Crimean Tatars in the peninsula."

Kırımoğlu earlier said courts in the annexed region were simply obeying orders of Moscow. He said the decision to suspend the activity of Mejlis was in violation, even of Russian law. "If you have filed a lawsuit, the result should be awaited," he said, adding: "This decision shows to the world, who Russia is."

About the restrictions on the body, the prosecutor had said: "The association is banned from using all state and municipal media; it can't hold various public mass events, use bank accounts or conduct any type of work. All its propaganda will be prohibited."

In March 2014, Russian President Vladimir Putin signed into law a deal, according to which the Ukraine's autonomous Republic of Crimea joined the Russian Federation, following a referendum held in the peninsula. The move was strongly opposed by Ukraine, the EU and the U.S. who put sanctions on Moscow.