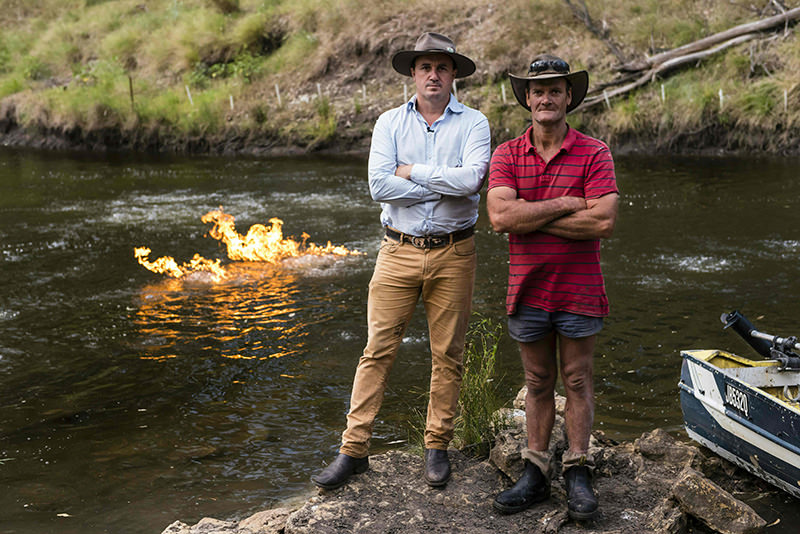 An Australian politician has set fire to a river to draw attention to methane gas he says is seeping into the water due to fracking, with the dramatic video attracting more than two millions views.

Greens MP Jeremy Buckingham used a kitchen lighter to ignite bubbles of methane in the Condamine River in Queensland, about 220 kilometres (140 miles) west of Brisbane.

The video shows him jumping back in surprise, using an expletive as flames shoot up around the dinghy.

"Unbelievable. A river on fire. Don't let it burn the boat," Buckingham, from New South Wales, said in the footage posted on Facebook on Friday evening, which has been viewed more than two million times.

"Unbelievable, the most incredible thing I've seen. A tragedy in the Murray-Darling Basin (river system)," he said, blaming it on nearby coal-seam gas mining, or fracking.

Australia is a major gas exporter, but the controversial fracking industry has faced a public backlash in some parts of the country over fears about the environmental impact.

Farmers and other landowners are concerned that fracking, an extraction method under which high-pressure water and chemicals are used to split rockbeds, could contaminate groundwater sources.

The Murray-Darling Basin is a river network sprawling for one million square kilometres (400,000 square miles) across five Australian states.

But the industry has said the practice is safe and that coal seam gas mining is a vital part of the energy mix as the world looks for cleaner fuel sources.

Origin Energy, which operates wells in the region, said it was monitoring the bubbling.

"We're aware of concerns regarding bubbling of the Condamine River, in particular, recent videos demonstrating that this naturally occurring gas is flammable when ignited," the company said in a statement to the Australian Broadcasting Corporation.

"We understand that this can be worrying, however, the seeps pose no risk to the environment, or to public safety, providing people show common sense and act responsibly around them."

The Australian energy firm said the methane seeps could be due to several factors, including natural geology and faults, drought and flood cycles, as well as human activity including water bores and coal seam gas operations.

The method is also known as hydraulic fracturing, and it has been widely used in Canada and the U.S.