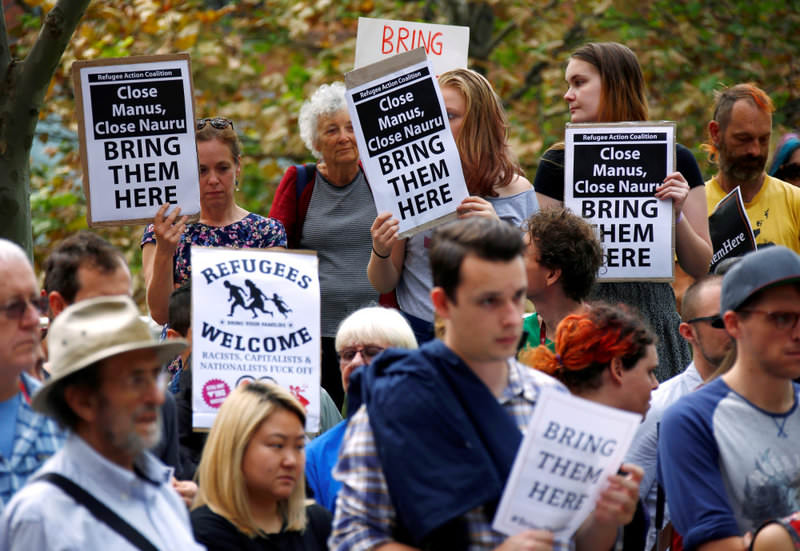 A 21-year-old Somali woman has become the second refugee in less than a week to set herself on fire at an offshore Australian detention center on the Pacific island nation of Nauru.

Australian officials blamed refugee advocates yesterday for "encouraging" asylum seekers held in remote camps towards acts of self-harm after a woman set herself on fire, while the United Nations (U.N.) renewed its criticism of Australia's harsh immigration policy.

Australian officials said an unidentified 21-year-old Somali woman was in critical condition after she set herself on fire at an Australian detention camp on the tiny South Pacific island of Nauru on Monday, the second such incident in a week. A 23-year-old Iranian man also set himself on fire last week in protest against his treatment on Nauru, and later died. The Somali woman has been transferred to Australia for treatment, said officials.

Under Australia's hardline immigration policy, asylum seekers intercepted trying to reach Australia after paying people smugglers are sent for processing to camps on Nauru, which holds about 500 people, and on Manus Island in Papua New Guinea. They are told they will never be settled in Australia.

The Papua New Guinea government ordered the Manus Island camp, which holds about 850 people, closed last week, after their Supreme Court ruled the facility unlawful. The harsh conditions and reports of systemic child abuse at the camps have drawn wide criticism inside and outside Australia, and have become a major headache for Australian Prime Minister Malcolm Turnbull during campaigning before likely elections in July.

Australia however has vowed there will be no change to the policy, which has been pursued by successive governments.

However, the peak U.N. body for refugees said such incidents in the camps, which hold asylum seekers fleeing violence in the Middle East, Afghanistan and South Asia, were a result of Australia's tough offshore detention polices.

"These people have already been through a great deal, many have fled war and persecution, some have already suffered trauma," the office of the U.N. High Commissioner for Refugees in Australia said in a statement. "The consensus among medical experts is that conditions of detention and offshore processing do immense damage to physical and mental health," it said.

A boat believed to be carrying asylum seekers from Sri Lanka had been intercepted near the remote Australian Indian Ocean territory of the Cocos Islands, the Australian Broadcasting Corporation reported later on Tuesday. If confirmed to be carrying asylum seekers, it would be the first such vessel to have arrived in Australian territory in almost two years. A spokeswoman for Dutton's office refused to confirm or deny such a vessel had been intercepted. The number of asylum seekers trying to reach Australia is small compared with those arriving in Europe, but border security has long been a major political issue and will almost certainly feature prominently again in elections likely to be held in July.

In February, Australian officials announced that a baby, seeking asylum after having been brought to the capital city of Canberra from a Pacific detention camp for hospitalization and medical treatment, will be returned to the camp as a message to smugglers, despite protests from doctors and others. The infant, known only by the pseudonym Asha – Nepalese for "hope" – has put a name to the faces of hundreds of anonymous asylum seekers being faced with deportation from Australia to a detention camp Nauru. The policies have been widely criticized by international human rights' groups and the U.N. Medical groups have been particularly critical of detaining children in the offshore camps, where abuse has been frequently reported. Doctors at the Brisbane hospital had refused to release Asha.
Last Update: May 04, 2016 1:03 am
RELATED TOPICS