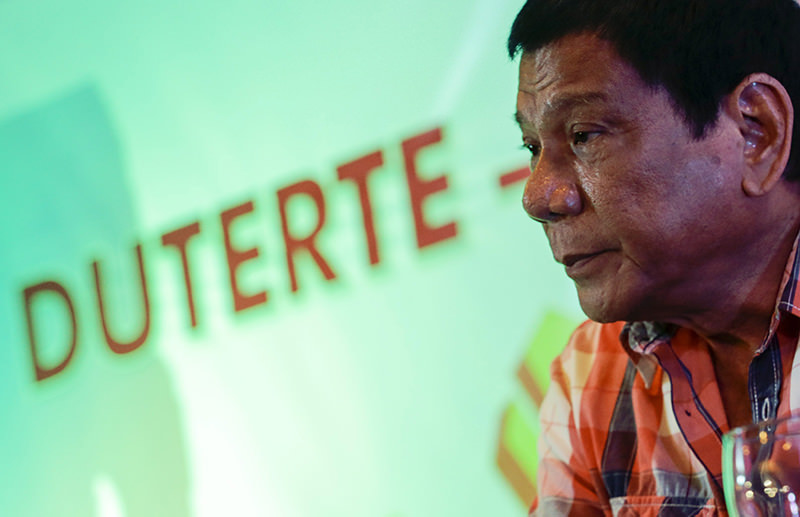 Filipino presidential candidate Davao City Mayor Rodrigo Duterte listens to questions during a press conference after he cast his vote for the National Election Day in Davao city, southern Philippines, 09 May 2016. (EPA Photo)
by Compiled from Wire Services May 09, 2016 12:00 am

Anti-establishment firebrand Rodrigo Duterte had a massive lead in the Philippine presidential election vote count yesterday, a poll monitor said, after an incendiary campaign dominated by his profanity-laced threats to kill criminals.

Asked by a television interviewer what he thought about his apparent victory, Duterte gave a puzzling answer.

"Sometimes I'm victorious and the winner, sometimes there's always losing and being sad, sometimes being sick and healthy," he told CNN Philippines, slouched in a chair and dressed casually in a checked, short-sleeve shirt.

"That is how the universe is being played every day."

The election numbers reported by the Parish Pastoral Council for Responsible Voting (PPCRV) had, by 1208 GMT (08:08 a.m. EDT), accounted for about 60 percent of the 54 million registered Filipino voters.

Duterte had 10.4 million votes, with Senator Grace Poe a distant second with 5.9 million. The government's candidate, Manuel Roxas, was just behind Poe with 5.8 million.

The 71-year-old's defiance of political tradition has drawn comparisons with U.S. Republican presidential candidate Donald Trump, as has his regular references to his libido.

His man-of-the-people demeanor tapped into popular disgust with the political establishment over its failure to tackle poverty and inequality despite several uninterrupted years of robust economic growth.

His incendiary rhetoric and advocacy of extrajudicial killings to stamp out crime and drugs have, however, alarmed many who hear echoes of the Southeast Asian country's authoritarian past.

Duterte, the longtime mayor of the southern city of Davao, had hypnotized millions with his vows of brutal but quick solutions to the nation's twin plagues of crime and poverty, which many believed had worsened despite strong economic growth in recent years. His big lead in pre-election surveys appeared to be carried into election day, according to the PPCRV, the Catholic Church-run poll monitor accredited by the government to tally the votes.

The pugnacious Duterte surged from being an outsider to the top of surveys with profanity-filled vows to kill tens of thousands of criminals, threats to establish one-man rule if lawmakers disobeyed him and promises to embrace communist rebels. Departing President Benigno Aquino, whose mother led the democracy movement that ousted Ferdinand Marcos three decades ago, had warned repeatedly the nation was at risk of succumbing to another dictatorship. "I need your help to stop the return of terror in our land. I cannot do it alone," Aquino said in an appeal to voters in a final rally on Saturday in Manila for his preferred successor and fellow Liberal Party stalwart, Mar Roxas.

In his final rally on Saturday, Duterte repeated to tens of thousands of cheering fans his plans to end crime within six months of starting his presidency. "Forget the laws on human rights," said Duterte, who has been accused of running vigilante death squads in Davao. "If I make it to the presidential palace, I will do just what I did as mayor. You drug pushers, hold-up men and do-nothings, you better go out because as the mayor, I'd kill you."

Another key message of Duterte's campaign was his pledge to take on the elite, even though his vice presidential running mate was from one of the nation's richest and most powerful families. Vice President Jejomar Binay, the early favorite, fell to fourth place in surveys under the weight of a barrage of corruption allegations. The unofficial tally of Monday's vote also placed him fourth.

In an intriguing sub-plot, Marcos' son and namesake had a slight lead in the race to be elected vice president, according to the poll monitor, which would cement a remarkable political comeback for his family. The Philippines has an infamous culture of political violence, and at least 10 people were killed on election day. At least 15 people had been killed in pre-election shootings and bombings, according to police. But authorities described Monday's violence as isolated incidents and that the overall conduct of the elections was peaceful.