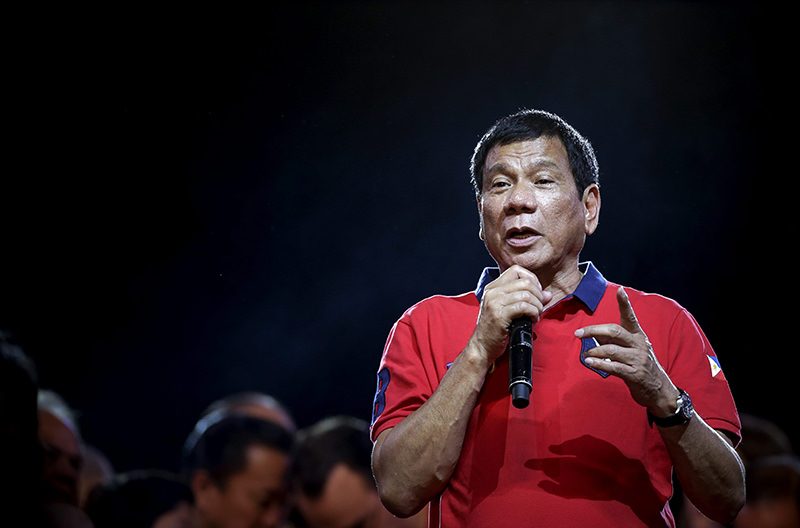 A picture made available on 12 May 2016 shows Philippine President-elect Rodrigo Duterte speaking to supporters during a rally in Manila, Philippines. (EPA Photo)
by May 15, 2016 12:00 am

In his first press conference since winning the May 9 elections in a landslide, the tough-talking mayor of southern Davao city warned his constant campaign threats to kill were not rhetoric.

"What I will do is urge Congress to restore death penalty by hanging," Duterte told a press conference in the southern city of Davao.

He also said he would give security forces "shoot-to-kill" orders against organised criminals or those who violently resisted arrest.

He added military sharp shooters would be enlisted in his campaign to kill criminals.

Duterte, 71, said he wanted capital punishment -- which was abolished in 2006 under then-president Gloria Arroyo -- to be reintroduced for a wide range of crimes, particularly drugs, but also rape, murder and robbery.

The centrepiece of Duterte's stunningly successful election campaign strategy was a pledge to end crime within three to six months of being elected.

Duterte vowed during the campaign to kill tens of thousands criminals, outraging his critics but hypnotising tens of millions of Filipinos fed up with rampant crime and graft.

On one occasion he said 100,000 people would die, and so many bodies would be dumped in Manila Bay that the fish would grow fat from feeding on them.

He complained that people no longer feared the law, and he would change that.

"We have a society now where obedience to the law is really a choice, an option only," he said.

"Do not destroy my country because I will kill you. I will kill you. No middle ground. As long as the requirements of the law are there, if you try to evade arrest, refuse arrest... and you put up a good fight or resist violently, I will say: 'Kill them'."

Duterte is due to be sworn into office on June 30 for a six-year term.

The current president, Benigno Aquino, warned repeatedly during the campaign that Duterte was a dictator in the making and would bring terror to the nation.

However his preferred successor, Mar Roxas, an establishment politician who promised to continue Aquino's slow but steady macroeconomic reforms, ended in a distant second place.

Duterte has been accused of running vigilant death squads during his more than two decades as mayor of Davao, a city of about two million people that he says he has turned into one of the nations safest.

Rights groups say the squads -- made up of police, hired assassins and ex-communist rebels -- have killed more than 1,000 people.

They say children and petty criminals were among the victims.

Duterte boasted on one occasion during the campaign of being behind the squads, saying they killed 1,700 people. But other times he denied any involvement.