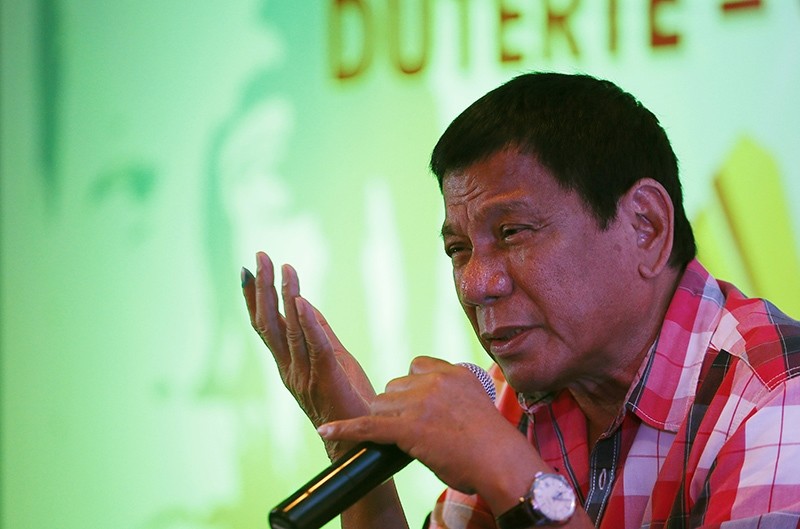 In this Monday, May 9, 2016 photo, front-running presidential candidate Mayor Rodrigo Duterte answers questions from the media during a news conference shortly after voting at his hometown in Davao city in southern Philippines (AP Photo)
by Compiled from Wire Services Jun 01, 2016 12:00 am
Philippine president-elect Rodrigo Duterte was under fire Wednesday for saying that corrupt journalists could face "assassination."

"Just because you're a journalist you are not exempted from assassination, if you're a son of a bitch," Duterte told a press conference in the southern city of Davao on Tuesday evening.

"There's still corruption on your side," he told reporters. "If you are a good journalist, no one will touch you especially if [what you report] is true."

The National Union of Journalists of the Philippines (NUJP) said it was "appalling" that Duterte would imply that killing journalists was justified if they were thought to be unethical.

"Duterte's crass pronouncement not only sullies the names and memories of our colleagues who have been murdered since 1986, he has also, in effect, declared open season to silence the media," it said in a statement.

Media groups expressed outrage Wednesday at Duterte's endorsement of killing corrupt journalists, warning his comments could incite more murders in a nation already one of the world's most dangerous for reporters.

Luis Teodoro, deputy director of the Manila-based Center for Media Freedom and Responsibility, described Duterte's comments as "distressing" and said they sent a signal to would-be killers that it was okay to murder in certain circumstances.

"When you say corrupt journalists can be killed, that is a very clear message," Teodoro told AFP.

"What he has done with these irresponsible comments is give security officials the right to kill for acts that they consider defamation," its Southeast Asian representative, Shawn Crispin, told AFP from Bangkok.

"This is one of the most outrageous statements we have ever heard from a president in the Philippines."

The Philippines has been ranked as one of the world's most dangerous places for journalists by press freedom groups, including the New York-based Committee to Protect Journalists.

On Friday, crime reporter Alex Balcoba was shot dead in Manila, the second journalist killed in the Philippines in 2016, according to the NUJP.

In 2009, 32 media workers were among more than 50 people killed in a local politician's convoy heading to a rally. The alleged masterminds are currently on trial.
Last Update: Jun 01, 2016 11:36 am
RELATED TOPICS