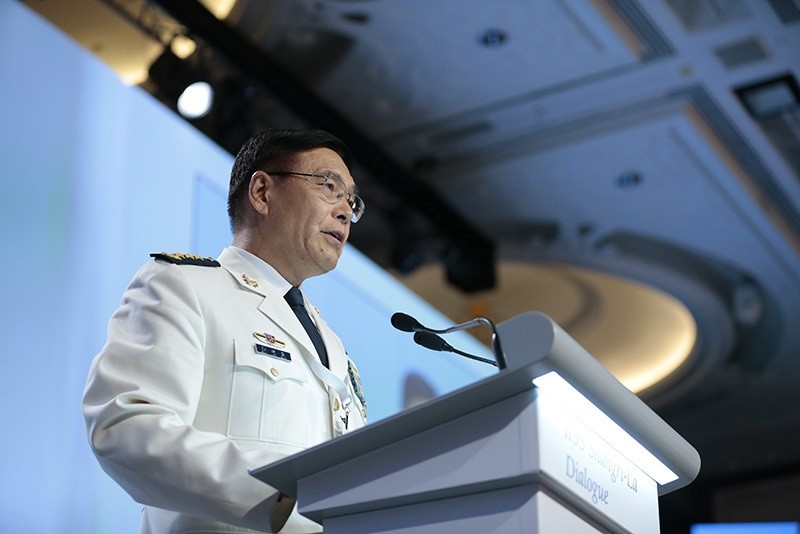 China on Sunday denounced US provocations in the South China Sea and said it does not fear trouble over its territorial disputes with neighbors in the area.

The South China Sea issue has become overheated because of the provocations of certain countries for their own selfish interests Admiral Sun Jianguo told a security summit in Singapore.

Sun, who stressed China's desire for a peaceful solution, spoke one day after US Defense Secretary Ashton Carter warned that Chinese construction on a South China Sea islet claimed by the Philippines would prompt unspecified actions by the United States and other nations.

On a visit to Mongolia Sunday, US Secretary of State John Kerry also warned Beijing against setting up an air defense identification zone over the disputed waters, saying it would be a provocative and destabilizing act.

Rhetoric has escalated ahead of a ruling from the Permanent Court of Arbitration in The Hague on a case brought by the Philippines, a longtime US ally and former colony, against China, which has shunned the proceedings and says it will not recognize any ruling.

The Chinese admiral, in a clear reference to Washington, said freedom of navigation patrols in the South China Sea were a display of military muscle, and that China was being forced to accept and honor the tribunal's ruling.

China firmly opposes such behavior. We do not make trouble but we have no fear of trouble, Sun said in prepared remarks.

Carter had left Singapore by the time Sun made his speech.

In an open forum, Sun addressed Carter's statement on Saturday that Beijing risks building a "Great Wall of self-isolation" with its military expansion in the contested waters.

Apparently referring to the Philippines, Sun said that China was by no means a bully and charged that some hegemonic countries have empowered small countries to make provocations against big countries.

Hong Kong's South China Morning Post has reported that China plans to establish an outpost on Scarborough Shoal, located 230 kilometers (140 miles) off the Philippines, which considers it part of its exclusive economic zone.

Beijing claims nearly all of the strategically vital sea and has developed contested reefs into artificial islands, some topped with airstrips.

Manila says China took effective control of Scarborough Shoal in 2012, stationing patrol vessels and shooing away Filipino fishermen, after a two-month stand-off with the Philippine Navy.

Carter declined to elaborate when pressed on Saturday over what actions Washington might take but proposed stronger bilateral security cooperation with China to reduce the risk of a mishap.

French Defense Minister Jean-Yves Le Drian told the forum that the European Union had a stake in maintaining freedom of shipping and navigation in the South China Sea, and said he would speak to his counterparts on the issue.

Brunei, Malaysia and Vietnam also have competing claims with China in the sea, which encompasses vital global shipping routes and is believed to have significant oil and gas deposits.

Beijing's territorial claims, based on controversial historical records, have also pitted it against the United States, which has conducted patrols near Chinese-held islands to press for freedom of navigation.