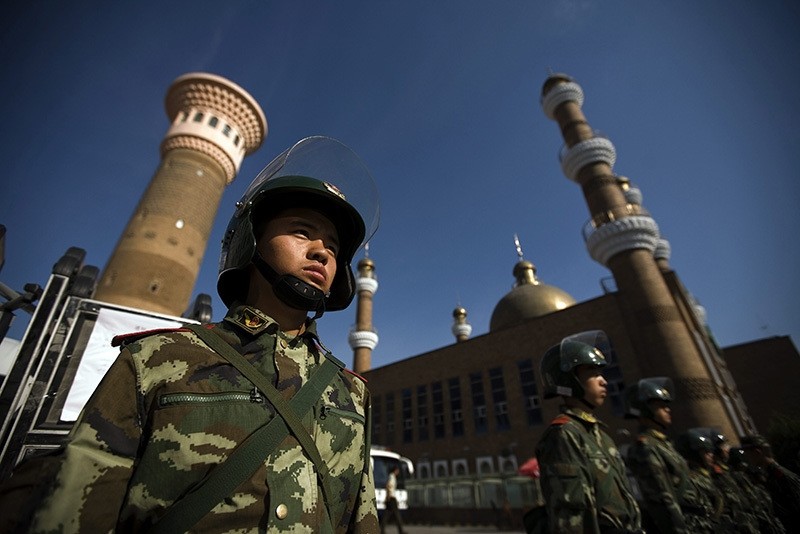 Fasting in Ramadan has been banned by the Chinese government for young and civil servants in East Turkistan. Muslim Uighurs are forced to live under unprecedented oppression and are subject to human rights abuses

Chinese officials have banned civil servants, students and children from fasting during Ramadan in the mainly Muslim region of Xinjiang, government websites said. Beijing has implemented strict rules in Xinjiang forbidding those under 18 from following a religion, and imposed fines on families whose children study the Quran or fast during the holy month of Ramadan, which began on Monday.

According to Radio Free Asia (RFA), parents and guardians of Uighur children and teens are frequently pressured by local officials into signing pledges to not allow them to take part in any religious activity. Muslim members of the ruling Chinese Communist Party are forbidden to openly follow their religion, while state-run organizations are routinely ordered to encourage everyone to eat during daylight hours, RFA reported.

China's ruling Communist party is officially atheist and for years has banned government employees and minors from fasting in Xinjiang. Last week, several local government departments in Xinjiang posted notices on their websites ordering restrictions on fasting during Ramadan. "Party members, cadres, civil servants, students and minors must not fast for Ramadan and must not take part in religious activities. During the month of Ramadan, food and drink businesses must not close," read a notice posted on the official website of the city of Korla in central Xinjiang. Another notice posted a website run by the education bureau of Shuimogou district in the regional capital Urumqi, calling for "prevention of students and teachers from all schools from entering mosques for religious activities" during Ramadan. According to a post on a state-run website for ethnic and religious minorities, officials in the northern city of Altay agreed to "increase contact with parents" to "prevent fasting during Ramadan."

In addition to the ban on fasting, Chinese officials have ordered restaurants to stay open. The website of the Qapqal Xibe Autonomous County government in northwest Xinjiang said that restaurants in the area would be instructed to stay open during Ramadan to "ensure that the broader masses have normal access to cuisine."

An exile group, the World Uighur Congress, condemned the restrictions. "China thinks that the Islamic faith of Uighurs threatens the rule of the Beijing leadership. Uighurs are subject to all manner of government bans and controls on their religious activity. Public anger will lead to more disturbances, and Beijing will bear political responsibility," read a written statement from Dilxat Raxit, from the World Uighur Congress.

China claims its constitution guarantees religious freedom. Zhang Chunxian, the top Communist official in Xinjiang, wished the Muslims who live in the mainly Muslim region "a happy Ramadan." Zhang Chunxian, secretary of the regional committee of the Communist Party of China (CPC), extended greetings to Muslims of different ethnic groups. The country's State Council released a written statement. "During the month of Ramadan, Muslim restaurants can decide whether they want to do business. There will be no interference. Local governments ensure that all religious activities during Ramadan go on in an orderly manner," State Council said. China has rejected criticism over the fasting ban, and says it faces a "terrorist threat" in Xinjiang, and officials blame "religious extremism" for growing violence in the region.

Uighur rights groups say Chinese oppression of minorities in Xinjiang is on the increase, especially during Ramadan. RFA reported that following a government directive, Uighur-run restaurants are forbidden to shut their doors during fasting hours. According to local sources, if Muslims break the rule, they face the risk of losing their jobs. Dilxat Raxit said, "China's goal in prohibiting fasting is to forcibly move Uighurs away from their Muslim culture during Ramadan. Policies that prohibit religious fasting are a provocation and will only lead to instability and conflict." Exiled Uighur groups and human rights activists say the repressive policies of the Chinese government in Xinjiang, including restrictions on religious practices, have provoked unrest, while Beijing denies these allegations.

In early 2016, Chinese officials stepped up security checks of Uighur smartphones users, especially in Northwestern Xinjiang, "to ensure stability in the area." Armed Chinese security forces in Hotan began to check smartphones and other electronic devices, with the pretext of preventing the spread of "extremist or religious texts and videos." In the provinces of Kashgar and Aksu, police have increased the number of checks performed against suspected extremists. Frisking or "pat-down searches" of Uighur worshippers outside of mosques has become routine. Officials said that increasing these searches intends to prevent "extremist" activity and terror attacks.

Despite China's statements, Uighurs in Xinjiang have long suffered from ethnic discrimination, oppressive religious controls and continued poverty and joblessness. Last year, China's ruling Communist Party launched an "anti-terror" campaign in Xinjiang, following a string of deadly attacks blamed by Beijing on Uighurs seeking to establish an independent state. According to the Uighur Human Rights Project report, 700 people were killed due to political activities in 2015. The number of those arrested in 2015 reached 27,000, an increase of 95 percent compared to 2014. The number of those sentenced to execution or life imprisonment increased 50 percent over the last year. Chinese officials continue to censor media in the region, as in other parts of China.

About 35 million people have died because of the Chinese army's oppression or famine, with about 26.3 million people killed between 1949, when China took over the region, and 1965; and 8.7 million people since 1965. Wearing a headscarf in public, including on public transportation and when getting married in a religious ceremony, was banned in 2014, with fines of about $353 imposed for wearing a headscarf in public. Radical behavior is banned, which the Chinese government defines as not drinking alcohol, not smoking and avoiding the eating of non-halal food. A group of five Uighur men who had "crescent moon-shaped" beards were on trial in Xinjiang for "religious extremism" after they were found to have secretly attended unsanctioned religion ceremonies in June 2015. Human rights groups, including Amnesty International and Human Rights Watch (HRW), have frequently reported that Beijing does not allow religious freedom and ethnic liberties as well as basic human rights in ethno-religious minority regions. Amnesty International's 2014-2015 Human Rights Report on religious freedom in China stated, "In the Xinjiang Uighur Autonomous Region, the authorities stepped up already harsh restrictions on Islam with the stated aim of fighting 'violent terrorism and religious extremism.' Numerous counties posted notices on their websites stating that students should not be permitted to observe Ramadan, and many teachers gave food and sweets to children to ensure that they did not observe the fast."

In recent years, Uighurs have fled China in response to harsh Chinese restrictions, often to countries in Southeast Asia. Turkey is one destination of choice for many Uighurs aiming to leave China. The Turkish government is under intense public pressure to support Uighurs, which creates tension for Ankara's relationships with Beijing. Turkey has accepted over 500 Uighurs who have sought refuge in the country in 2015, according to the Uighur Human Rights Project.

Many Uighurs refer to China's Xinjiang Uighur Autonomous Region, which is home to many ethnic minority groups including the Turkic-speaking Uighur people, as East Turkestan. Uighurs are one of many Turkic-speaking ethnic groups in the region who are culturally and historically connected to Central Asia, and do not consider themselves as part of China.