Why China increases oppression in Xinjiang 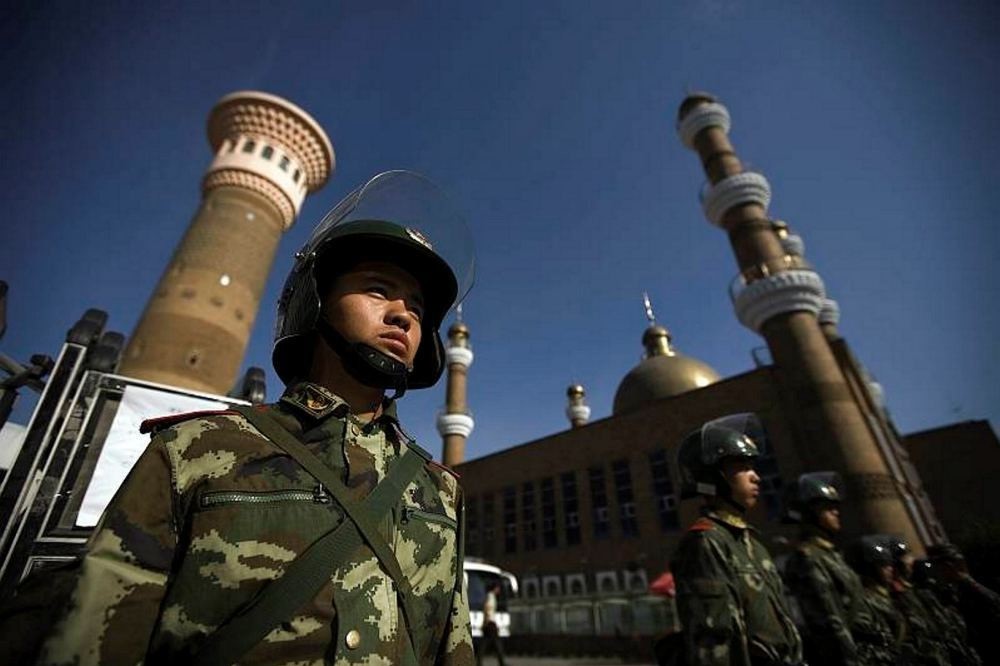 Chinese security forces patrol the entrance to a historic mosque in Xinjiang.
by Cihangir Yıldırım Jun 09, 2016 12:00 am

The Xinjiang Uighur Autonomous Region is a vast region located in the northwestern corner of the China. Many from the local Uighur population refer to China's Xinjiang Uighur Autonomous Region, which is home to many ethnic minority groups including the Turkic-speaking Uighurs, as East Turkestan. Chinese officials claim that Xinjiang has been part of China since the Han Dynasty. Uighurs are one of many Turkic-speaking ethnic groups in the region who are culturally and historically connected to Central Asia, and do not consider themselves as part of China. Officially, Xinjiang became part of China invaded and took East Turkestan over in 1949, the same time as Tibet. Most Uighurs are Muslim and Islam can be an important part of their lives and identity. Of China's 55 officially recognized minorities, 10 groups are predominantly Sunni Muslim. The highest concentrations are found in the northwestern provinces of Xinjiang, Gansu, and Ningxia, with significant populations also found throughout Yunnan province in southwest China. Chinese officials value the region as a source of natural resources crucial to economic development, a space to absorb migrants and a strategic link to the former Soviet Central Asian republics. Xinjiang is an important trade and pipeline route into Central Asia. It borders eight countries: Mongolia, Russia, Kazakhstan, Kyrgyzstan, Tajikistan, Afghanistan, Pakistan and India. The region has rich deposits of natural gas, oil and nonferrous metals. Xinjiang was also a nuclear testing ground in the past. In the late 19th century the region was noted for producing salt, soda, borax, gold, jade and coal.

Xinjiang's economy was largely based on agriculture and trade in the past, with cities such as Kashgar developing as hubs along the famous Silk Road. China, continuing its transportation infrastructure projects, is building 12 new highways in Xinjiang to connect it with Russia, Kazakhstan, Tajikistan and Pakistan. The longest road will stretch 1,680 kilometers from Xinjiang to Uzbekistan, Iran, Turkey and finally Europe. Other infrastructure projects completed in 2007 include a south-to-north water diversion, a west-to-east natural gas pipeline, a west-to-east power transmission and the Qinghai-Tibet Railway. China and Turkmenistan signed a framework agreement on gas pipelines in 2006. Since 2009, gas pipelines from Turkmenistan and Uzbekistan to China are in the works. These pipelines connect with the Xinjiang-Shanghai gas pipeline and contribute to the implementation of China's development policies. Turkmen gas reserves are thought to be the largest in Central Asia. The oil and petrochemical industry accounts for 60 percent of Xinjiang's local economy. China and Kazakhstan signed the Transnational Atasu Pipeline project in 2004 and completed it in November 2005. The agreement is based on joint exploration for and development of oil and gas resources in the Caspian Sea. China and Kazakhstan are also stepping up plans for a natural gas pipeline to connect gas fields in the Caspian Sea with China. Another agreement signed with Kazakhstan is to build up international passenger and freight rail transport in an effort to boost trade and complete routes to Europe. The two countries opened a free trade zone on their border to increase their economic relationship.

China is home to a many Muslim ethnic minorities who subjected to assimilation by Chinese policies. According to the State Administration for Religious Affairs (SARA), there are more than 21 million Muslims in the country. A Pew Research Center study based on the Chinese census found that there are 21.6 million Muslims in China, accounting for 1.6 percent of the total population. According to the 2011 census, the largest Muslim ethnic group is the Hui, also known as Dungans, with 12 million, and the second-largest group is the Uighurs at 10 million. The rest, in descending order, are Kazakhs, Kyrgyz, Uzbeks, Tajiks and. Additionally, the small amount of Tibetan Muslims are officially classified along with the Tibetan people. The Chinese government imposed birth restrictions on Muslim minorities in Xinjiang in 2014. The party chief said it was necessary to lower fertility and implemented a family planning policy as part of efforts "to fight terrorism." In 2015, Xinjiang doubled payouts to Uighur couples who have fewer than their quota to 6,000 yuan ($950). Ethnic Han Chinese forced to move to Xinjiang arrived at different times since 1776. According to a census from early 19th century, 75 percent of the region's total population was Uighur. According to Human Rights Watch (HRW), at the beginning of the Chinese economic reform in 1978, including population planning, Uighurs dropped to 42 percent of the population.

Uighurs have long suffered ethnic discrimination, oppressive religious controls and continued poverty and joblessness in Xinjiang. For years, Chinese officials restricted fasting during Ramadan for civil servants, students and children. In 2015, China's ruling Communist Party launched an anti-terrorism campaign in Xinjiang following a string of deadly attacks Beijing blamed on extremist Uighurs seeking to establish an independent state. According to a Uighur Human Rights Project report, 700 people were killed due to political activities in 2015. The number of those arrested increased 95 percent compared to the 2014, reaching 27,000. The number of those sentenced to execution or life imprisonment increased 50 percent last year. Chinese officials continue to censor media in the region, as in other parts of China. Some 26.3 million people are estimated to have been killed between 1949, when China took over the region, and the Great Leap Forward, and 8.7 million people since 1965. About 35 million people have died because of military oppression or famine. Wearing a headscarf in public, including on public transportation and when getting married in a religious ceremony, was banned in some places in 2014, with fines of about $353 for wearing a headscarf in public. Radical behavior is banned, which the Chinese government defines as not drinking alcohol, not smoking and avoiding eating non-halal food. A group of five Uighur men who had "crescent moon-shaped" beards were on trial in Xinjiang for religious extremism after they were found to have secretly attended unsanctioned religious ceremonies in June 2015.
RELATED TOPICS