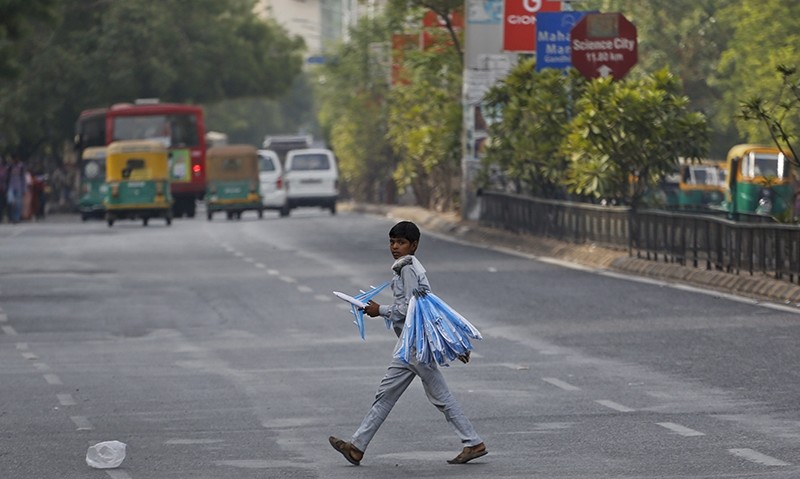 An Indian boy who sells toy planes at a traffic intersection reacts to camera as he crosses a road on the eve of World Day Against Child Labor in Ahmadabad (AP Photo)
by French Press Agency - AFP
Jun 13, 2016 12:00 am

An Indian business student who went undercover to expose child labour at a factory promised Monday to keep up the fight after her efforts led to the rescue of more than 100 children.

Jharna Joshi, 22, was visiting relatives in the western state of Gujarat when she noticed large numbers of children going to work at a ceramics factory.

She asked local people about the issue but could not confirm the workers were under-age, so decided to apply for a management trainee job at the factory.

"In the factory I accessed records of these workers and found that the majority of them were below 18 years of age. Some were even below 14 years which is illegal," she told AFP.

When her appeals to local child protection authorities went unheeded, she wrote to the state's Chief Minister Anandiben Patel and travelled to the capital Gandhinagar to lobby state government officials.

Earlier this month government officers raided the factory and rescued 111 child workers, most of them girls.

Millions of children in India work in factories, mines and other areas, according to aid agencies and government data.

The law bans those under 14 from working in hazardous jobs, but activists say it is not properly implemented.

Joshi said she was attacked as she went to the police station to record her statement by two men who pulled her off her scooter.

But she vowed to continue the fight, saying she knew of more factories in the area that employed under-age workers.

"I will continue to fight until the ceramic unit owners are behind bars. They used to make children work in such sub-human conditions," she said.