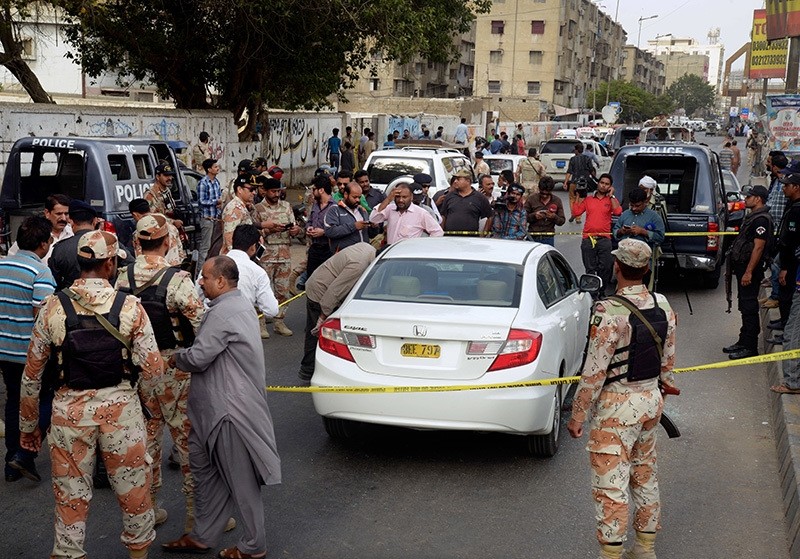 Pakistani investigators and journalists gather around the blood-stained car of famous Sufi singer Amjad Sabri after an attack in Karachi, Pakistan, Wednesday, June 22, 2016. (AP Photo)
by Compiled from Wire Services Jun 22, 2016 12:00 am

The latest victim of violence and murders that has gripped the southwest Asian nation was "Qawwal" Amjad Sabri, with fingers pointed at Taliban as the main culprit

One of Pakistan's best known Sufi musicians was shot dead by unknown assailants on a motorcycle in Karachi on Wednesday, triggering an outpouring of grief over what police described as an "act of terror".

Amjad Sabri, aged around 45, was travelling by car with a companion in the city's Liaqatabad area, when a motorcycle pulled up alongside the vehicle and the attackers opened fire, Farooq Sanjarani, a police officer told AFP.

Sabri was hit by five bullets and was declared dead at Abbasi Shaheed Hospital while his companion, named as a relative, Saleem Sabri, was in critical condition, a hospital source added.

"It was a targeted killing and an act of terrorism," Muqaddas Haider, another senior police officer said, without naming possible suspects.

Sabri was a 'Qawwal', or singer of 'Qawwali', which is a traditional form of Islamic devotional music that is popular across South Asia with roots tracing back to the 13th century.

The music is closely associated with Sufism, a mystical sect of Islam that is viewed as heretical by hardline groups such as the Taliban.

Sufi shrines, where Qawaali songs are sung, have been under attack by Pakistan's Taliban militants, who believe music and dance performed at shrines is against Islam. The Taliban and extremist groups have carried out major attacks on Sufi mosques and shrines in recent years, including the 2010 bombing of the Data Darbar shrine in Lahore that killed more than 40 people.

Sabri, the son of another legendary Qawwali singer, Ghulam Farid Sabri who died in 1994, was a fixture on national television and regularly performed on a morning show during the ongoing holy Muslim month of Ramadan.

In May 2014 he was asked by a court to respond to blasphemy charges following the airing of a controversial song-and-dance routine that was set to a Qawwali piece about the wedding of the Prophet Muhammad's daughter to his cousin.

His killing was met with shock and condemnation by many.

"Totally shocked to hear the news of @AmjadSabri. May Allah bless him with Jannah (heaven) for he praised Him & His Prophet beautifully all his life," tweeted Ayaz Sadiq, the speaker of Pakistan's parliament.

"Shocked and saddened by news of the killing of Amjad Sabri, not just a crime but an attack on our culture and heritage," added Mustafa Qadri, a human rights researcher at Amnesty International.

The attack came just days after son of the chief of Sindh High Court was kidnapped from Karachi by unknown men on Monday.

Sindh High Court is the highest court in Sindh province, of which Karachi is the capital.

Karachi has been facing political, sectarian and militant violence for years which have killed hundreds of people, according to police. A sharp decline in murders is being witnessed since the Pakistani military launched a crackdown two years ago against suspected militants and violent criminals.

In May, gunmen shot dead prominent Pakistani rights activist Khurram Zaki, known for his outspoken stance against the Taliban and other radical Islamist groups, in the central part of the city.

In April last year, prominent activist Sabeen Mahmud was shot and killed while travelling in her car.