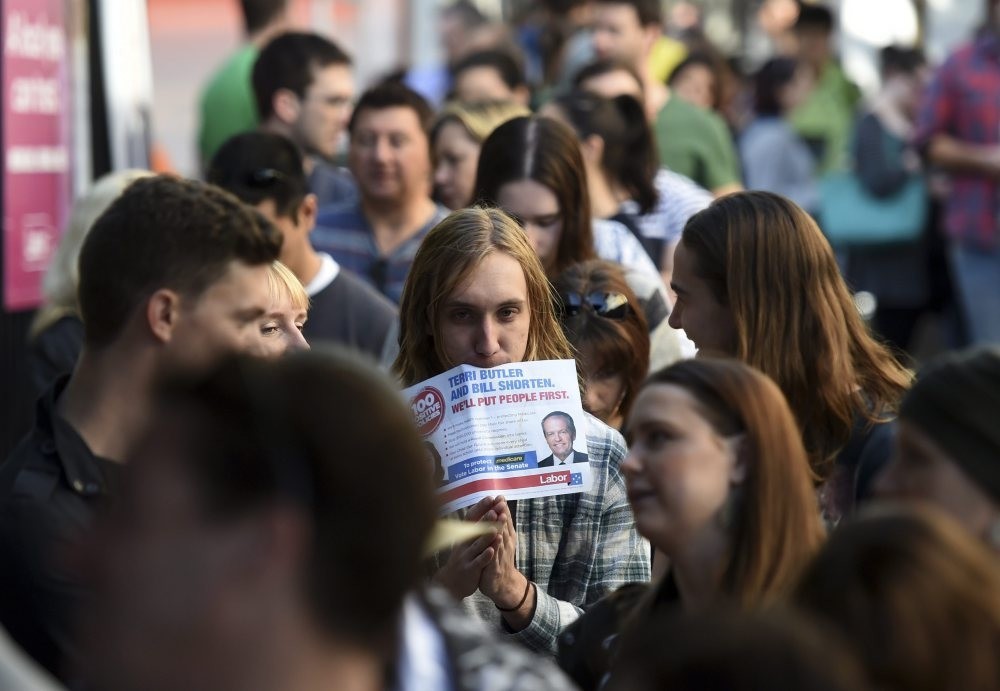 Australians woke up Sunday in political limbo after the previous day's parliamentary election failed to deliver a clear winner, with a strong probability for a hung parliament

Australia was in political limbo Sunday after voters failed to hand Prime Minister Malcolm Turnbull the stability he craved in calling an election, with the nation instead facing the prospect of a hung parliament.

The former banker went to the polls early looking to shore up support and deliver a strong government based on a "jobs and growth" agenda after ousting fellow Liberal Tony Abbott in a party coup last September to become the country's fourth leader in recent years.

But he now faces the prospect of having to deal with independents and minor parties to stay in power after a near three percent swing against his administration.

Despite a host of coalition deputies being dumped, Turnbull insisted he remained "quietly confident" while admitting to a flurry of phone calls in a scramble to broker deals with lawmakers he may need onside to retain office. "I remain quietly confident that a majority coalition government will be returned at this election when the counting is completed," he said on Sunday. "What we will do is ensure that we work constructively and effectively with all of the members of the new parliament to ensure that we deliver the stability and the leadership that Australians expect."

After a host of postal votes were added to running totals Sunday, his Liberal/National coalition had 65 seats to Labor's 67, the Greens one and independents four, results showed. That leaves 13 seats still too close to call with 76 needed to rule outright in the 150-seat House of Representatives.

Key supporters of Abbott are already calling for Turnbull's resignation. "The Liberal Party is already deeply divided following last year's challenge," Reece said. "It will now be riddled with internal ructions and instability. Put all that together and I can't see Turnbull lasting until Christmas as leader [and prime minister]."

Labor heavyweights are also blaming Turnbull for the resurrection of anti-Muslim campaigner Pauline Hanson, who has been returned to the Senate after 18 years in the political wilderness.

A final outcome is not expected until Tuesday at the earliest, and it could take weeks, with millions of postal and absentee votes yet to be processed, which experts say traditionally favor the incumbent.

Turnbull had campaigned on tough asylum-seeker policies and a plan to hold a plebiscite on gay marriage, but mostly on reinforcing his economic credentials as the country transitions from a mining investment boom to a more diversified economy. He also used the instability sparked by Britain's shock vote to leave the European Union to warn that Australia must have "calm heads, steady hands and a strong economic plan."

Opposition leader Bill Shorten tapped into this, focusing his last days of campaigning on health which helped Labor bounce back strongly after being thumped by the conservatives at the last election in 2013.

"His agenda was out of touch and a lot of Australians made that clear yesterday in the ballot booths right across Australia," he said of Turnbull.

Business leaders said the possibility of a hung parliament was bad news and urged a speedy resolution. "Business is appealing to Australia's political leaders to provide a road map as soon as possible through the uncertainty of an unclear election result to a functioning government," Business Council of Australia chief Jennifer Westacott told reporters.

Turnbull called the election not just to shore up support but because crossbenchers – politicians who are independent or from minor parties – held the balance of power in the upper house Senate.

They had failed to pass deadlocked legislation to overhaul unions, which provided the trigger for a double dissolution of parliament, where all seats in the upper and lower houses are contested. But even if he manages to form government, there is no guarantee the new Senate will be more amenable.

Votes are yet to be finalized but the likes of One Nation's Pauline Hanson, who once claimed Asians were in danger of swamping the country, is expected to be elected to the upper house. She looks likely to be joined by a host of other unconventional candidates, including long-time journalist and broadcaster Derryn Hinch, known as the "human headline," who campaigned on justice for the victims of criminals.

Under Australia's hardline immigration policy, asylum seekers intercepted trying to reach Australia after paying people smugglers are sent for processing to camps on Nauru and on Manus Island in Papua New Guinea. They are told they will never be settled in Australia. Australia has long been under fire for its tough asylum policies and its slow response to the Syrian crisis. Policies have been widely criticized by international human rights' groups and the United Nations. Medical groups have been particularly critical of detaining children in the offshore camps, where abuse has been frequently reported.
RELATED TOPICS