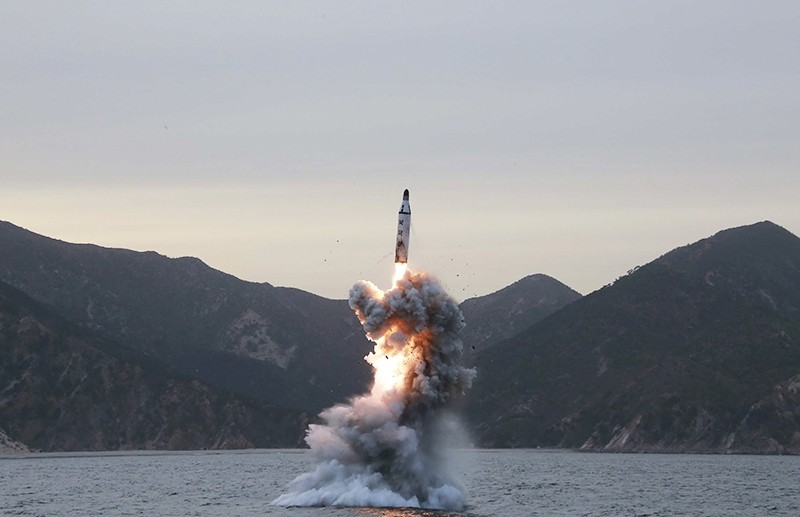 North Korea launched a ballistic missile from a submarine Saturday, but the rocket exploded soon after take-off, the South's military said.

The missile appeared to have been launched from a submerged 2,000-ton Sinpo-class submarine, before exploding at around 10 kilometres altitude, Yonhap reported, citing unnamed military sources.

The launch comes at the end of a week of sharply rising tensions on the peninsula. It is only a day after the U.S. and South Korea pledged to deploy an advanced anti-missile system to counter threats from Pyongyang, and two days after North Korea warned it was planning its toughest response to what it deemed a "declaration of war" by the United States.

The South's Office of the Joint Chiefs of Staff said in a statement that the missile was launched at about 11:30 a.m. Seoul time (0230 GMT) in waters east of the Korean peninsula.

The missile was likely fired from a submarine as planned but appears to have failed in the early stage of flight, the Joint Chiefs said.

South Korea's Yonhap news agency said the missile's engine successfully ignited but the projectile soon exploded in mid-air at a height of about 10 km (6 miles), and covered not more than a few kilometers across the water.

The South's military declined to confirm those details.

The missile was detected in the sea southeast of the North Korean city of Sinpo, South Korea's military said. Satellite images indicate Pyongyang is actively trying to develop its submarine-launched ballistic missile program in this area, according to experts.

"We call on North Korea to refrain from actions that further raise tensions in the region and focus instead on taking concrete steps toward fulfilling its international commitments," the State Department said in a statement.