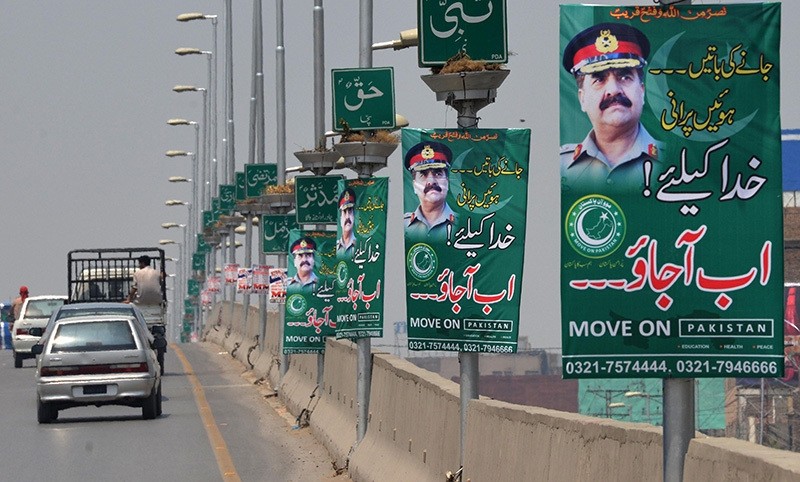 Thousands of banners indirectly urging an army takeover of Pakistan's government have been put up across the country in recent days.

Pictures of army chief Gen. Raheel Sharif and slogans supporting him adorn the banners, which have mostly been placed on heavily-secured roads near government and military offices, according to witnesses and local media, leading to speculation the campaign has the military's tacit support.

"Talk of leaving has become old, for God's sake come now," scream the posters, referring to General Raheel Sharif's decision to step down at the end of his tenure this year, featuring a large photograph of the mustachioed general.

The banners, which appeared in capital Islamabad along with Lahore, Karachi and the garrison city of Rawalpindi as well as several army-run cantonment areas, were put up by the obscure Move On Pakistan party, which earlier launched a campaign requesting Sharif reconsider plans to retire in November.

"Dictatorship is much better than this corrupt government," Ali Hashmi, chief organizer behind Move on Pakistan, told AFP Tuesday.

"The way General Raheel Sharif has dealt with terrorism and corruption, there is no guarantee that the next man would be as effective as him," he said.

Hashmi said that authorities in Islamabad and Punjab province, the prime minister's power base, had removed the posters -- but that they continue to attract attention in other provinces.

Prime Minister Nawaz Sharif is said to be preparing to name a successor to the wildly popular general, who is no relation and whose three-year tenure expires in November.

Widely credited with Pakistan's improved security situation, he is the frequent subject of hashtags such as #ThankYouRaheelSharif and #PakLovesGenRaheel.

The prime minister and his government, in contrast, have been plagued by accusations of corruption and inefficiency.

But, despite his popularity, the army chief's announcement in January that he would step down at the end of his tenure won him praise for respecting democratic institutions -- unlike three of his predecessors.

He had rejected calls to extend his term after his popularity was boosted by the perceived success of a military operation against Taliban militants in the country's northwestern tribal areas.

"Though he had categorically announced he would not accept [an] extension in his term, it now seems he has started reconsidering that decision," Talat Masood, an Islamabad-based defense and political analyst, told Anadolu Agency.

Masood said "certain quarters in the military establishment" who wanted army rule were backing this campaign but others were also opposed to Sharif staying on as it would block their own rise through the military.

Despite U.S. lawmaker John McCain calling for Sharif to stay on, Masood said he did not believe Prime Minister Nawaz Sharif shared that stance.

"The prime minister will not compromise on this issue," he said. "I don't think he is going to offer extension to Gen. Raheel Sharif, who no doubt has done a remarkable job in terms of taking on militancy."

Masood said the imposition of martial law by the military was unlikely.

In a social media post late Tuesday, the army denied any link to the banners and posters. "[The] army or any affiliated organization has nothing to do with posters with the army chief's pictures being displayed across various cities", spokesman Lt. Gen. Asim Saleem Bajwa said on Twitter.

Pakistan has had four military rulers since it was founded in 1947 and military governments ruled the country for more than half its 69-year history. The armed forces are widely seen as controlling defense and foreign policy.

Sharif, who was elected in June 2013, was ousted by military takeovers during both of his previous terms as prime minister.

Whoever takes over Raheel Sharif's role will face an array of daunting challenges, including keeping homegrown militants in check, vexed relations with India and the role Pakistan wants to play in promoting peace in Afghanistan.