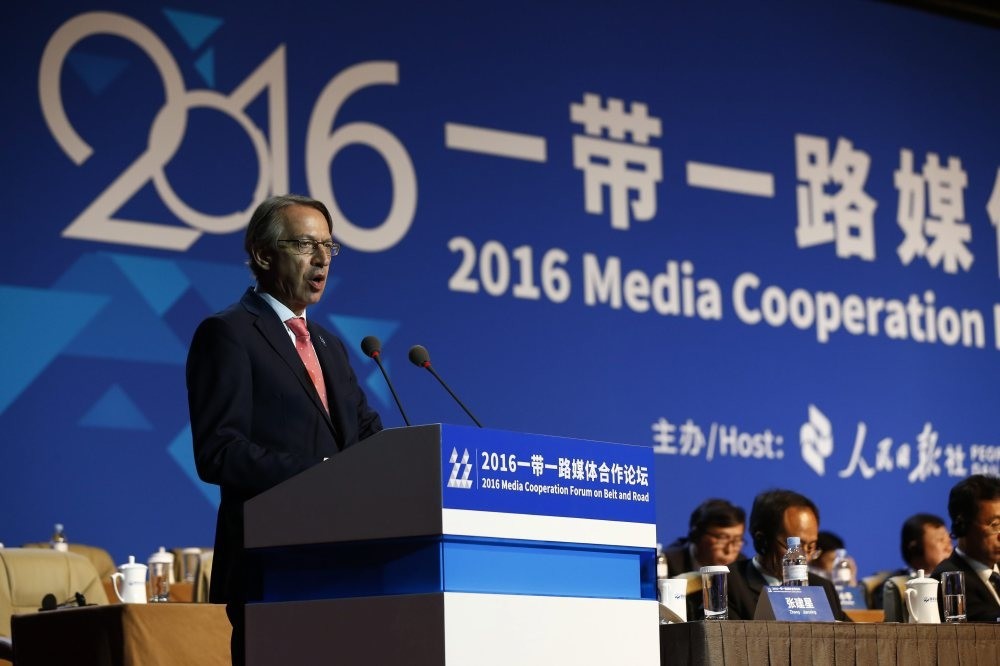 In a media forum organized by the People's Daily with 200 media members from more than 100 countries participating, China signaled that it is ramping up efforts to revive the historic Silk Road through building a high-speed rail system to reach Europe, the Middle East and Africa

One of China's main media outlets, the People's Daily, organized a two-day event in Beijing with the participation of 200 media members from more than 100 countries, including the U.S., Japan, Russia, Togo and Brazil. The event has been held every year since 2014 to explain the Silk and Belt Road project in efforts to revive the historic Silk Road as part of China's ambition to take a more active role in world politics through economic cooperation with Central Asian countries and Turkey, investing around $1 trillion. China aims to build a high-speed rail system, connecting Beijing to Istanbul, as the world's second largest economy wants to strengthen its position in European and African markets.

The event started with the reading of a letter sent by Chinese President Xi Jinping that said the Silk Road is a common treasure for the world. "In order to promote the spirit of the Silk Road, China has put forward the Belt and Road Initiative, which will be jointly carried out through extensive consultation so that it honors the interests of all, and promotes policy coordination, facilities connectivity, unimpeded trade, financial integration and person-to-person bonds between countries along the Belt and Road route," the statement read. The statement also emphasized that China wants other countries to benefit from the project to tackle their main problems like unemployment and poverty.

Vice chairman and secretary-general of the Standing Committee of the 12th National People's Congress, Wang Chen, said that China wants to further its relations and cooperation with Asian countries and considers the Belt and Road project to be an opportunity, since the project has already helped make some $1.4 billion in profit and will create job opportunities for 60,000 people with the participation of 30 countries. He added that two-thirds of the world's population lives in Asia, but the labor power there cannot be used properly to develop the region. Economic cooperation will also lead to cultural rapprochement in terms of education, tourism and media, he said.

Yang Zhenwu, president of the People's Daily, said the media outlet cooperates with 23 other media companies from different countries and believes that the Belt and Road project will make media outlets closer as people from the participant countries will want to hear more from each other. He added that market integration is a must and that these developments must be based on friendship rather than rivalry.

Wu Hongbo, undersecretary-general of the Department of Economic and Social Affairs at the United Nations, also expressed the U.N.'s support for the project, as it might contribute positively to peace in the region where disputes over the South China Sea occupy agendas of regional countries as well as the United States.

Qian Keming, vice minister of the Commerce Ministry, said Turkey is important for the project as the high-speed train is expected to stop in Istanbul, a gateway to both Europe and Africa. He said Turkey's investments in infrastructure and efforts for development are considerable and significant for the region.

Western media giants like Reuters, Bloomberg and the Daily Mail were also present and their representatives also gave speeches. They expressed their support for the project, as it will increase attention for news from China, but added that despite positive changes in recent years, Beijing still has a way to go for transparency, accountability and free media.

In the second part of the event, several media representatives from various countries discussed the future of traditional and new media, as social media, smartphones and improving technology have been making significant changes on traditional ways of presenting news. At the end, a joint declaration was issued. "We will improve cultural harmonization and enhance mutual understanding, trust and tolerance via new media platforms. We will persevere in media innovation with close communication on new technologies so that we can go forward hand in hand to create great success. We will establish an information and resource sharing mechanism among world media following our plans. No man is an island. Let's firmly hold our hands together, stepping toward a better future," the statement read.
RELATED TOPICS