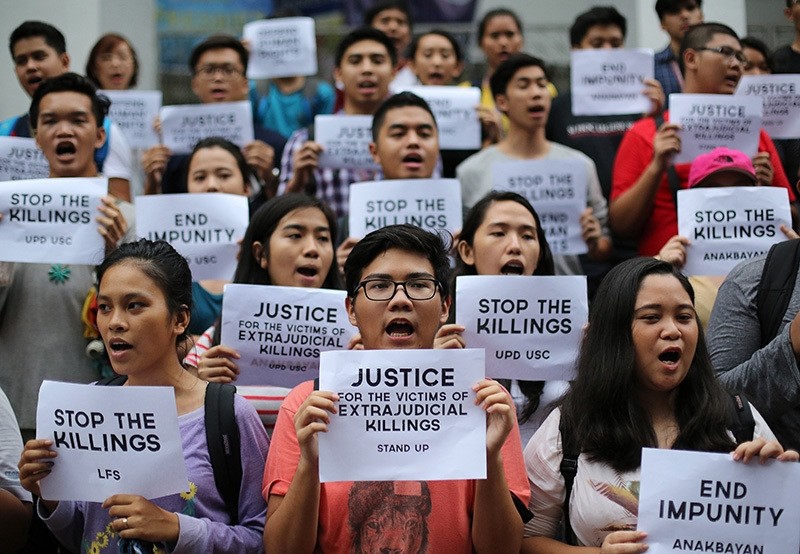 Filipino student activists shout slogans as they call for justice for victims of extrajudicial killings during a rally at the University of the Philippines in suburban Quezon city, north of Manila, Philippines, Thursday Aug. 11, 2016. (AP Photo)
by Associated Press Aug 11, 2016 12:00 am

The number of suspected drug dealers killed in Philippine President Rodrigo Duterte's crackdown has risen to more than 500 in just over a month, police said Thursday, in an alarming campaign that sparked protests and plans for a Senate investigation.

Since July 1, 525 drug suspects have been killed in clashes with police while more than 7,600 suspects have been arrested in more than 5,400 antinarcotics assaults, the national police's Directorate for Investigation and Detective Management said in a report. More than half a million have surrendered to authorities, according to police.

Some local news agencies have reported considerably higher death tolls, some as high as nearly 1,000, in counts that included drug suspects killed by unidentified attackers since Duterte emerged as the president-elect following the May 9 elections.

Police officials say those killed had put up a fight, although critics argue that circumstances indicate many of the suspects were illegally killed or died because police did not follow established procedures in dealing with crime suspects.

Left-wing activists protested at several schools against the killings and Duterte's threat to place the country under martial law if the Supreme Court attempted to block his fight against crime, specifically illegal drugs which he said has worsened into a pandemic.

"Human rights have been sacrificed in the conduct of the anti-drug drive, with those holding the gun assuming the roles of both accusers and executioners," left-wing protest leader Vencer Crisostomo said. "It is impossible to ascertain innocence or guilt if the accused are simply shot on the spot."

"The Duterte regime's war on drugs is bound to fail if it continues to rely on extrajudicial killings led by a corrupt and abusive police and military hierarchy, Crisostomo said, adding that the illegal drug trade is a symptom of deeper social problems, like rising poverty, joblessness and hunger, "which cannot be wiped out by bullets alone."

The crackdown involves testing policemen nationwide if they have used illegal drugs and the report said 116 of 75,848 policemen have tested positive and were being investigated and would face possible charges and dismissal from the force.

Sen. Leila de Lima said the Senate's committee on justice and human rights, which she heads, would start an investigation into the killings on Aug. 22. Duterte's political allies in Congress have tried to block the planned investigation.

Duterte built a name as a crime busting mayor of southern Davao city. During the presidential campaign and after taking office, he has openly threatened drug dealers and other criminals with death and has called for restoring the death penalty — by hanging because he says he didn't want to waste electricity on outlaws.

Duterte has encouraged law enforcers to go hard on criminals and has assured them he would back them up and pardon them if they are convicted of committing human rights violations while battling criminals.