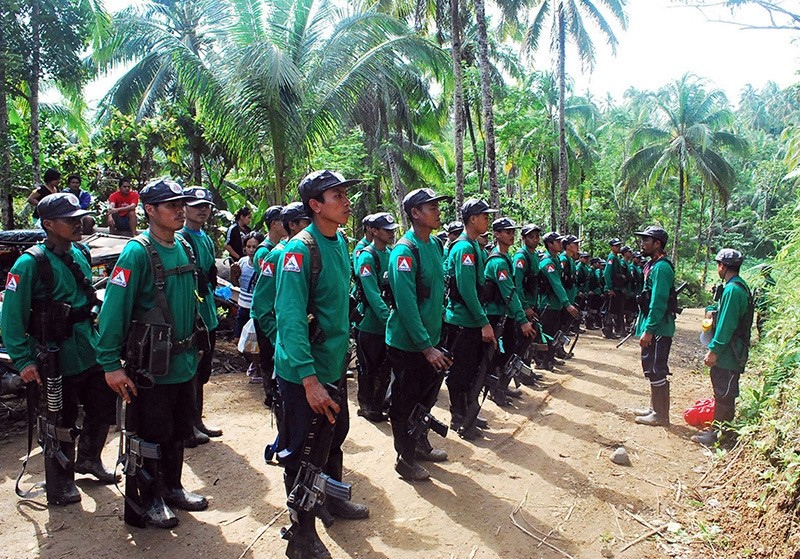 In this file photograph taken on December 26, 2009, New People's Army (NPA) rebels stand to attention during the 41st founding anniversary of the Communist Party of the Philippines in Surigao del Sur province of Mindanao Island. (AFP Photo)
by Compiled from Wire Services Aug 20, 2016 12:00 am

Philippines President Rodrigo Duterte has reciprocated a weeklong unilateral ceasefire declared by communist rebels ahead of the resumption of peace talks next week.

Before flying to Norway for negotiations, Presidential Adviser on the Peace Process Jesus Dureza told a press briefing Saturday that Duterte's government "will walk the extra mile for peace".

The Manila Bulletin quoted the statement read by Dureza as saying that the ceasefire was effective 12 a.m. Sunday (1600GMT Saturday).

The CPP and its armed wing, the New People's Army (NPA), said in a statement that the ceasefire was declared "to celebrate and bolster" the resumption of formal negotiations between their political arm the National Democratic Front (NDF) and the government.

The declaration came hours after a regional court temporarily released a couple, Benito and Wilma Tiamzon, accused of being leaders of the CPP-NPA, bringing the number of those released to participate in negotiations to at least 19.

"We therefore feel optimistic that the mutual efforts of both sides would lead to fruitful negotiations that could pave the way for substantive discussions in the hope of putting an end to one of Asia's longest-running insurgencies," Andanar was quoted by the Philippine Daily Inquirer as saying.

During the talks, the CPP seeks to address a proposal for Duterte to grant a general amnesty for the release of all political prisoners.

More than 500 members of the communist groups, which have been waging a decades-old insurgency, are currently in detention.

Duterte had declared a unilateral government ceasefire during his first state of the union address July 25, only to call it off days later after an ambush by NPA members killed a government militiaman in southern Davao del Norte province.

Previous negotiations with the CPP-NDF collapsed in 2004 after the communists withdrew from the negotiating table on account of the renewed inclusion of CPP founder Jose Maria Sison and the NPA on the United States terrorist list.

In 2014, negotiations again failed because previous President Benigno Aquino III turned down the rebels' demand to release detained comrades, accusing the rebels of insincerity in efforts to achieve a political settlement.

In his peace overtures, Duterte -- who won the May 9 election -- has said that he will release all political prisoners if party leaders return from exile and sit down for negotiations.

He has also offered the CPP posts in his new government to smooth the way.

Communist rebels in the Philippines have fought one of Asia's longest-running insurgencies. Although less numerous and less violent than Muslim separatist rebels in the country's south, the Maoists have outlived successive Philippine administrations and held out against constant military and police offensives, relying on clandestine cells to pass on orders from exiled leaders.

A brief look at the rebels and their struggle:

HOW A WORLD WAR SPARKED COMMUNISM IN THE PHILLIPINES

The rebels trace their roots to a communist party whose guerrilla wing helped fight Japanese occupation forces in World War II. After the liberation and the Philippines' independence from the U.S., however, the leftists were politically sidelined and armed rebels crushed. In 1968, the Communist Party of the Philippines was re-established on Mao Zedong's birthday, proclaiming as its goal "the protracted peoples' struggle" modeled on China.

The rebels' ranks swelled after dictator Ferdinand Marcos declared martial law in 1972. The armed wing of the Communist Party, the New People's Army, set up jungle camps all over the sprawling archipelago as launching pads for raids targeting the military and police, large agricultural and mining estates as well as U.S. forces, which maintained big overseas bases until 1991.

The insurgency has left about 150,000 combatants and civilians dead since it broke out, drawing support from the ranks of those dissatisfied with economic inequality and the Philippines' alliance with the U.S. It also has stunted economic development, especially in areas of the countryside where the rebels are active.

The rebels missed an opportunity to win wider political clout when they boycotted a historic 1986 snap election, which was dismissed as a sham and led to the overthrow of Marcos in a "people power" revolt and restoration of democracy. President Corazon Aquino freed the rebel founder, Jose Maria Sison, from prison and opened peace talks. However, Sison fled into exile in the Netherlands and the talks broke down. In 1987, the rebels killed three American soldiers in separate attacks near Clark Air Base. In 1989, they assassinated U.S. Army Col. James Rowe, who was providing counterinsurgency training to Filipino troops.

A REBELLION WITHIN THE REBELLION

By the early 1990s, differences over strategies led to a split in the rebel ranks and a bloody internal purge that left hundreds dead, further weakening the rebels, whose numbers dwindled to a few thousands from a peak of 25,000. The remaining fighters have relied on so-called "revolutionary taxes" for survival — extorting money from businesses, or blowing them up if they refuse. The government accuses the rebels of kidnappings and providing guns-for-hire, saying they've become bandits and a spent ideological force.

Peace talks started again in 1995, and made progress with the government pledging immunity from arrest and safe movement for rebel negotiators. The two sides later reached another agreement on the respect for human rights and humanitarian law. The negotiations again broke down, and resumed in 2001. However, the rebels withdrew from talks when the U.S. government, followed by the European Union, placed them on a list of terrorist organizations.

Under Duterte's predecessor, Benigno Aquino III, peace talks stalled over the government's refusal to heed a rebel demand for the release of some captured guerrillas who were to serve as peace talks consultants. Duterte, however, has agreed to the release of rebels who are involved in peace talks, and appointed two allies of the guerrillas to Cabinet posts in concessions that fostered the resumption of talks.