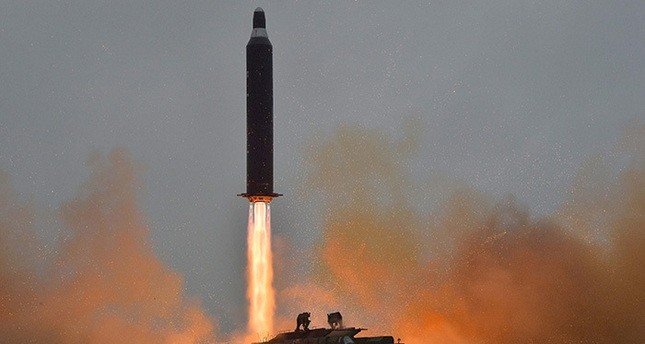 A statement from the JCS revealed that the mid-range Rodong missiles were fired on the same day from North Hwanghae Province - indicating the projectiles flew eastward across the peninsula before reaching the same Japanese zone as submarine-launched ballistic missile tested by the North late last month.

A JCS official responded by telling local media that South Korea is on guard.

"We are fully prepared to fight tonight in case North Korea makes any provocative moves," the official was quoted as warning by Yonhap News Agency - with the Koreas locked in an uneasy stalemate having never reached a peace treaty after the 1950-53 Korean War.

The United Nations Security Council on Tuesday will hold a discussion on North Korea after requests by the United States and Japan's UN missions, the New Zealand mission announced Monday.

Pyongyang is barred from testing ballistic missiles under several United Nations resolutions and was hit with strengthened sanctions this year.

The timing of Monday's launches suggests they were at least partly a response to renewed dialogue between South Korea and the North's traditional ally China.

Earlier in the day, South Korean President Park Geun-hye held talks with her Chinese counterpart Xi Jinping on the sidelines of the G20 summit in Hangzhou, after months of frayed Seoul-Beijing ties due to China's public opposition to the planned deployment in the South of an American anti-missile system, Terminal High Altitude Area Defense (THAAD).

While Xi again conveyed THAAD reservations, he also reiterated his commitment to the U.N.'s tougher punitive measures against North Korea.