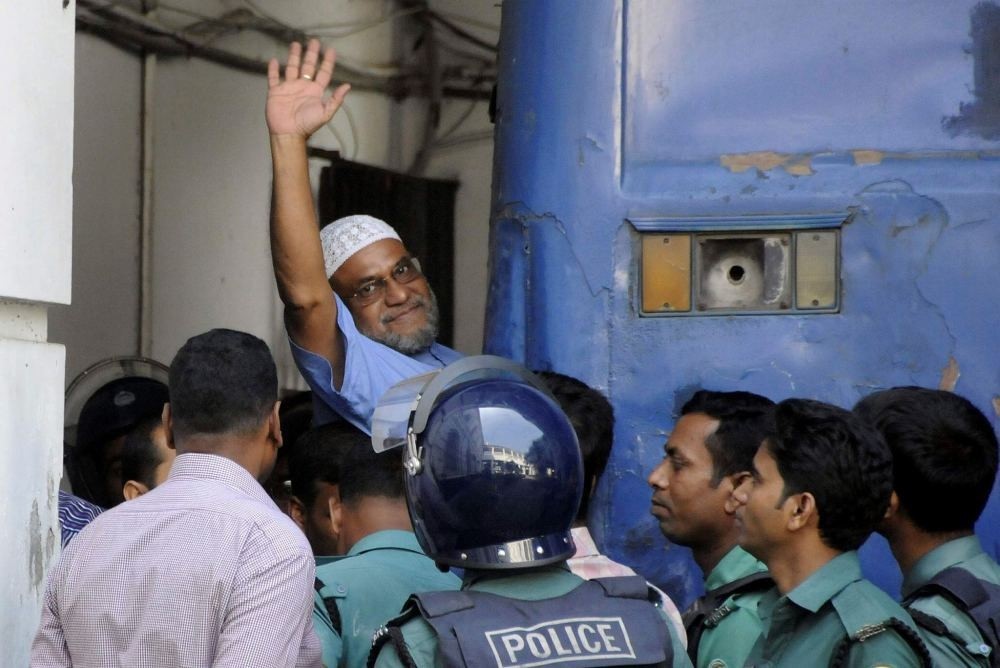 Mir Quasem Ali, a leader of the Jamaat-e-Islami party, was hanged at 10:30 p.m. Saturday, hours after several dozen family members and relatives met him for the last time inside Kashimpur Central Jail near the capital, Dhaka, said Proshanto Kumar Bonik, a senior jail superintendent. "We are doing our necessary formalities now. We will send the body soon to the ancestral home in Manikganj district for burial," Bonik said. Immediately after the execution, Home Minister Asaduzzaman Khan said security measures were put in place to prevent unrest by Ali's supporters, including deployment of paramilitary border guards and additional police in Dhaka and other cities. The Jamaat-e-Islami party in a statement protested Ali's execution and called for an eight-hour general strike beginning Monday morning. The execution took place a day after Ali refused to seek presidential clemency. The president had previously rejected appeals for clemency by other party leaders facing execution. On Tuesday, the Supreme Court rejected a final appeal for reviewing Ali's death sentence handed out by a special tribunal two years ago. After the ruling, the Jamaat-e-Islami party called for a daylong general strike across the country last Wednesday, but got little response.

Immediately after the execution, foreign ministry of Turkey issued a condemnation. "We have learned with sorrow that the death sentence issued by the International Crimes Tribunal in Bangladesh against Mir Quasem Ali, Key-Financier and Central Executive Council Member of the Jamaat-e-Islami, has been executed in Bangladesh. We stress once again that the wounds of the past cannot be healed with these methods and hope that this wrong practice will not lead to separation among the brotherly people of Bangladesh," the statement read.

A special tribunal dealing with war crimes sentenced Ali to death in November 2014. The 63-year-old member of Jamaat-e-Islami's highest policy-making body was found guilty on eight charges, two of which carried the death sentence, including the abduction and murder of a young man in a torture chamber. Ali was sentenced to 72 years in prison on the other charges. Ali built his fortune by establishing businesses from real estate to shipping to banking, and he was considered one of the party's top financiers. He became the fifth Jamaat-e-Islami party leader to be executed since 2010, when Prime Minister Sheikh Hasina formed the special tribunal to try suspected war criminals. Also executed was a close aide of former Prime Minister Khaleda Zia from the main opposition Bangladesh Nationalist Party. Jamaat-e-Islami is a key partner of Zia's Bangladesh Nationalist Party in the opposition against Hasina. Hasina's government says Pakistani soldiers, aided by local collaborators, killed 3 million people and raped 200,000 women in the 1971 independence war. Jamaat-e-Islami, which had openly campaigned against independence, has denied committing atrocities. Hasina has called the special tribunal trials a long overdue effort to obtain justice for the victims of war crimes, four decades after Bangladesh split from Pakistan. Her government has rejected criticism from abroad that the trial process did not meet international standards.

The international human rights group Amnesty International noted that the United Nations had raised questions about the fairness of the trials of Ali and other party leaders. "There is no question that the people of Bangladesh deserve justice for crimes committed during the War of Independence, but the death penalty is a human rights violation and will not achieve this. It is a cruel and irreversible punishment that most of the world's countries have now rid themselves of," said Champa Patel, Amnesty International's South Asia Director, in a statement released Saturday.
RELATED TOPICS