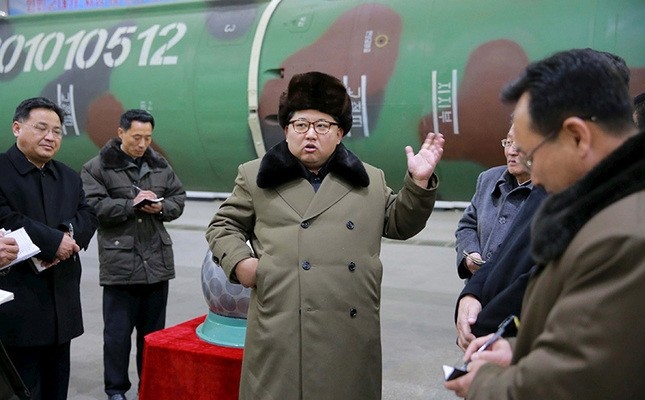 A report from the North's KCNA news agency revealed that the dictator demanded more "miraculous achievements in bolstering up the nuclear force".

The order comes despite renewed calls for the peninsula's denuclearization during this week's gathering of key regional players at the G20 summit in China.

The United Nations Security Council on Tuesday "strongly condemned" the launches in a statement, saying the acts were "in flagrant disregard" of the Council's statements and caused increased tensions by contributing to the country's development of its nuclear weapons systems.

Pyongyang incurred strengthened United Nations sanctions in March following its fourth ever nuclear test at the start of the year.

North Korea claimed that test involved a hydrogen bomb and the reclusive state is fast developing the technology to launch ballistic missiles from submarines.

With Chinese leader Xi Jinping reiterating Monday his commitment to international punitive measures, Beijing may be expected to back a statement of condemnation from the United Nations Security Council in response to the North's latest missile tests, which the KCNA report said demonstrated Pyongyang's capability "of mounting a pre-emptive attack on the enemies any time and from any place".

China has adopted a balance between supporting sanctions against the North while maintaining cooperation with its traditional ally in recent months.

Meanwhile, the United States and South Korea -- perceived as enemies by Pyongyang -- stressed the importance of Beijing's role in pressuring Pyongyang.

The South's President Park Geun-hye held talks with American counterpart Barack Obama in Laos on the eve of an Association of Southeast Asian Nations summit -- the first meeting between the leaders since Seoul and Washington announced in July that they would deploy a contentious anti-missile system against the wishes of both North Korea and China.

Local news agency Yonhap stated that Park and Obama reaffirmed their plan to position a THAAD (Terminal High Altitude Area Defense) battery in South Korea, but they also vowed to maintain communication with Beijing over the North Korean nuclear issue.