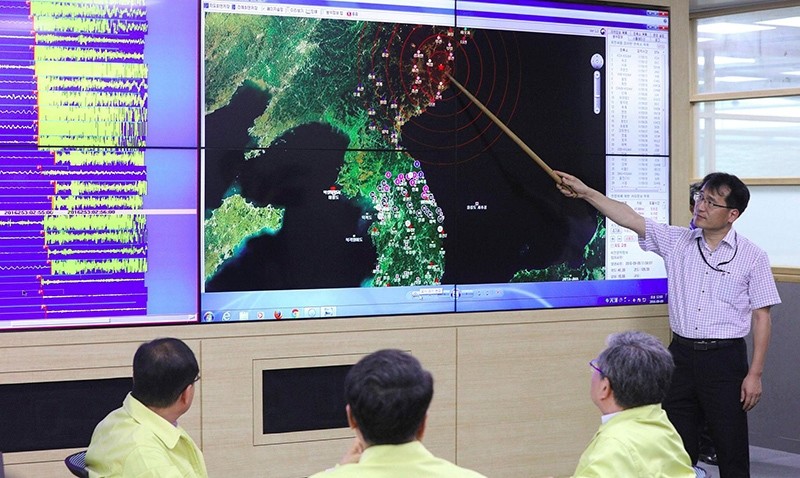 A South Korean official points to a map showing the epicenter seismic waves in North Korea, at the Korea Meteorological Administration in Seoul on September 9, 2016 following news of another nuclear test by North Korea (AFP Photo)
by German Press Agency - DPA Sep 09, 2016 12:00 am
North Korea carried out its fifth and possibly biggest ever nuclear test on Friday, Seoul has announced, triggering an earthquake measuring magnitude 5.0 and condemnation from neighbours.

"We estimate the North has carried out the biggest-ever test," a statement by South Korea's Joint Chiefs of Staff cited by Yonhap news agency said, adding that the yield was thought to have been 10 kilotons.

The bomb dropped by US forces on Hiroshima had a yield of 16 kilotons.

State media in the North also confirmed that the test had been successful.

The quake was located near North Korea's Punggye-ri underground nuclear test site, where all of the country's tests have been carried out since it began testing in 2006 and where recent satellite imagery had shown fresh activity.

It is thought Friday's test could have been planned to coincide with the 68th anniversary of the Pyongyang regime, founded by Kim Il Sung and now led by his grandson Kim Jong Un.

South Korea's President Park Geun Hye slammed the test as a provocation that would lead to further international sanctions and said Seoul would use "all possible measures" to force Pyongyang to give up its nuclear programme.

Japanese Prime Minister Shinzo Abe had earlier also told reporters that a confirmation of the nuclear test, would be "absolutely unacceptable and we would have to lodge a strong protest."

In Washington, National Security Council spokesman Ned Price was quoted by US media as saying, "We are aware of seismic activity on the Korean Peninsula in the vicinity of a known North Korean nuclear test site.

"We are monitoring and continuing to assess the situation in close coordination with our regional partners."

China, traditionally Pyongyang's only ally, said it had activated an emergency plan, the second highest level on a four-step plan for environmental emergencies, and begun monitoring radioactivity on its border.

The Environment Ministry in Beijing said no abnormal levels had so far been detected at monitoring stations in China's three north-eastern provinces.

There was no other immediate reaction from China.

Tension has been high since North Korea's fourth nuclear test in January and a controversial rocket launch in February, events which led the United Nations Security Council to tighten sanctions on the isolated nation.

The Council again condemned Pyongyang on Tuesday, a day after it fired three ballistic missiles into the Sea of Japan, coinciding with a G20 summit in the Chinese city of Hangzhou.
Last Update: Sep 09, 2016 3:39 pm
RELATED TOPICS