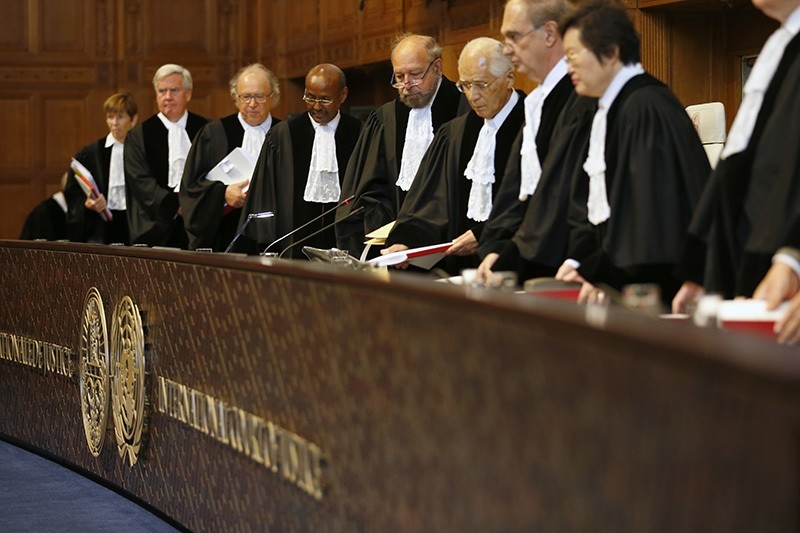 Judges, with presiding judge Ronny Abraham of France, fifth from left, enter the World Court in The Hague, Netherlands, Wednesday, Oct. 5, 2016. (AP Photo)
by Compiled from Wire Services Oct 05, 2016 12:00 am

By the tightest possible margin, the United Nations' highest court on Wednesday rejected three nuclear disarmament cases filed by the tiny Pacific Ocean nation of the Marshall Islands against Britain, India and Pakistan, saying it did not have jurisdiction.

In a blow to disarmament activists, the International Court of Justice ruled that the Marshall Islands failed to prove that a legal dispute over disarmament existed between it and the three nuclear powers before the case was filed in 2014, and that "consequently the court lacks jurisdiction."

The 16-judge bench at the International Court of Justice (ICJ) ruled there was no evidence that Majuro had had a prior dispute with any of the three nuclear giants or sought bilateral negotiations on the issue.

"The court upholds the objection to jurisdiction" raised by each of the countries, presiding judge Ronny Abraham said in separate rulings, and therefore the tribunal "cannot proceed to the merits of the case."

It took a casting vote by the court's President Ronny Abraham's to break an eight-eight deadlock between the court's 16 judges on the question of jurisdiction.

Abraham acknowledged that the Marshall Islands has a particular interest in nuclear disarmament "by virtue of the suffering of its people" during years of testing at Bikini and Enewetak atolls between 1946 and 1958.

The tiny Pacific island nation was ground zero for a string of devastating nuclear tests on its pristine atolls between 1946-58, carried out by the United States as the Cold War arms race gathered momentum.

After the hearings at the tribunal based in The Hague, the Marshalls said it will now "study the ruling" which is final and without appeal.

"If the court keeps creating this sort of threshold, what is the court for?" he said. "It's a dispute that is clear to all of the world except for eight judges here."

Initially in 2014, Majuro had accused nine countries of failing to comply with the 1968 nuclear Non-Proliferation Treaty, which seeks to inhibit the spread of atomic bombs.

The country originally filed cases against all nine nations that have declared or are believed to possess nuclear weapons: The U.S., Russia, Britain, France, China, India, Pakistan, Israel and North Korea. But only the cases against Britain, India and Pakistan got to the preliminary stage of proceedings, as the ICJ already refused to take up cases against the other countries which do not recognize the court's jurisdiction.

Israel has also never formally admitted to having nuclear weapons.

The Marshall Islands had argued that by not stopping the nuclear arms race Britain, India and Pakistan had breached obligations under the treaty -- even if New Delhi and Islamabad have not signed the pact.

The treaty commits all nuclear weapon states "to pursue negotiations in good faith on effective measures relating to cessation of the nuclear arms race at an early date and to nuclear disarmament."

The court has previously delved into the issue of nuclear weapons. In a landmark 1996 advisory opinion, the court said that using or threatening to use nuclear arms would "generally be contrary to" the laws of war and humanitarian law.

But it added that it could not definitively rule on whether the threat or use of nuclear weapons would be legal "in an extreme circumstance of self-defense, in which the very survival of a state would be at stake."

The judges in 1996 also unanimously stated that there is a legal obligation "to pursue in good faith" nuclear disarmament talks.

At a March hearing, Majuro's lawyers painted a vivid picture of the horrors seen after 67 nuclear tests were carried out on Bikini and Enewetak atolls.

"Several islands in my country were vaporized and others are estimated to remain uninhabitable for thousands of years," Tony deBrum, a former Marshall Islands foreign minister, told the court.

The so-called "Operation Castle" tests in March and April 1954 were particularly devastating and resulted in massive contamination because of the nuclear fall-out.

Critics have argued however that the ICJ action is a distraction and that the islanders' real fight is with Washington, which carried out the tests in their backyard.

They contend that the case has no relation to the victims' claims for increased compensation, better health care and clean-ups to render the sites habitable again.

Experts however say the islands hoped the three cases before the ICJ will thrust nuclear disarmament talks, which have stalled over the past two decades, back into the spotlight.

Even if the case has no direct impact, the Marshall Islands' residents "perhaps feel that the more the difficulties with nuclear weapons are brought to the public consciousness, the better," said Jens Iverson, assistant professor of Public International Law at Leiden University.

"They may hope that the world may become a safer place," Iverson told AFP.