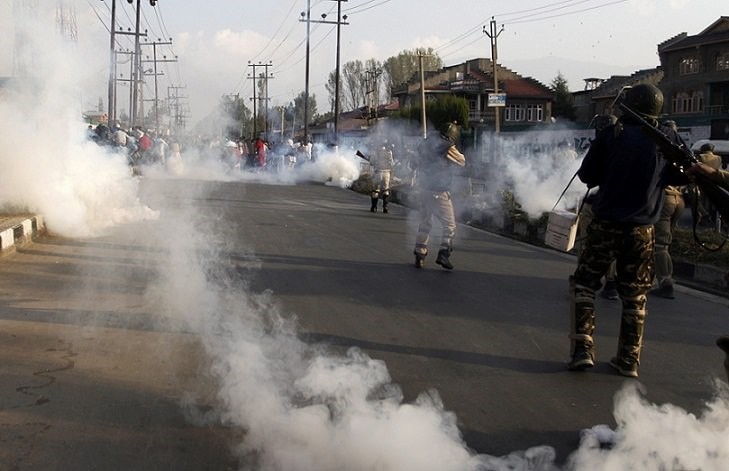 Kashmiri Muslims hold the body of Junaid Ahmad, 13, amid tear smoke fired by Indian police during his funeral procession in Srinagar, the summer capital of Kashmir, Oct. 8 2016. (EPA Photo)
by Oct 08, 2016 12:00 am

A teenager was killed in firing by Indian forces in Kashmir, sparking widespread anger and prompting authorities to impose a curfew on Saturday.

Junaid Ahmed Bhat, 13, was critically wounded after troops fired shotgun pellets and tear gas at protesters in the state capital Srinagar on Friday.

He succumbed to the injuries early on Saturday, triggering further protests in which hundreds of people took to the streets to shout anti-India slogans, a local police officer said.

Clashes broke out as the boy's body was being taken to the burial ground, with protesters. Several people were injured in the latest protests, which led to a curfew being imposed in some areas of Srinagar.

More than 90 people have been injured and thousands injured in clashes between the forces and protesters since July 8.

Both India and Pakistan administer separate portions of Kashmir but claim the region in its entirety.