Maldives becomes the latest country to leave the Commonwealth 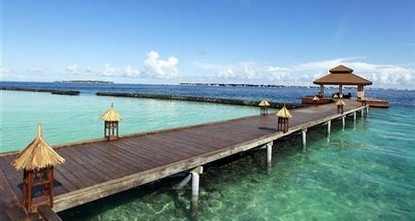 The Maldives angrily quit the Commonwealth on Thursday after years of wrangling over its human rights record since the toppling of its first democratically-elected leader four years ago.

The troubled honeymoon island nation said it had been treated "unjustly and unfairly" by the bloc, a voluntary association of more than 50 countries, many of them former territories of the British empire.

The former British protectorate has come under intense international pressure since the controversial conviction of former president Mohamed Nasheed on terrorism charges.

The Commonwealth put Male on notice after Nasheed stood down as president in February 2012 and said he had been forced out in a coup.

It has since criticised the government over its crackdown on dissidents and its controversial judiciary, and sent a special envoy to try to improve the archipelago's rights record.

In its statement Thursday, the Maldives, which had previously threatened to pull out of the bloc, accused the London-based Commonwealth Secretariat of interfering in its affairs.

"The Commonwealth has sought to become an active participant in the domestic political discourse in the Maldives, which is contrary to the principles of the charters of the UN and the Commonwealth," it said.

"The Commonwealth Secretariat seem to be convinced that the Maldives... would be an easy object that can be used, especially in the name of democracy promotion, to increase the organisation's own relevance and leverage in international politics."

The United States has said democracy is under threat in the strategically located archipelago, which sits on key international shipping lanes.

Washington has criticised the rush trial against Nasheed and demanded his release.

A UN panel has also ruled that Nasheed's imprisonment last year was illegal and ordered the regime of President Abdulla Yameen to pay him compensation.

The country of 340,000 Sunni Muslims is famed for its coral-fringed islands but has been gripped by political unrest since the fall of Nasheed and there are regular anti-government protests.

The government faces allegations of corruption as well as cracking down on any dissent while all its opposition leaders are either in exile or in jail.

Nasheed secured political asylum in Britain this year after travelling to London for medical treatment while on prison leave from a controversial 13-year prison sentence.

He travelled to neighbouring Sri Lanka last month to meet with other exiled Maldivian dissidents in a bid to agree on a plan to "legally topple" Yameen.

While dissidents met in Sri Lanka, Maldivian police raided the offices of the Maldives Independent website in the capital Male hours after Al Jazeera aired a documentary accusing Yameen and his government of massive corruption and money laundering.

Yameen has also been facing problems from his own family. In July, his niece Dunya Maumoon quit as foreign minister saying she did not agree with a plan to bring back the death penalty after nearly seven decades.

The country becomes the latest to leave the Commonwealth after Gambia which quit in October 2013.