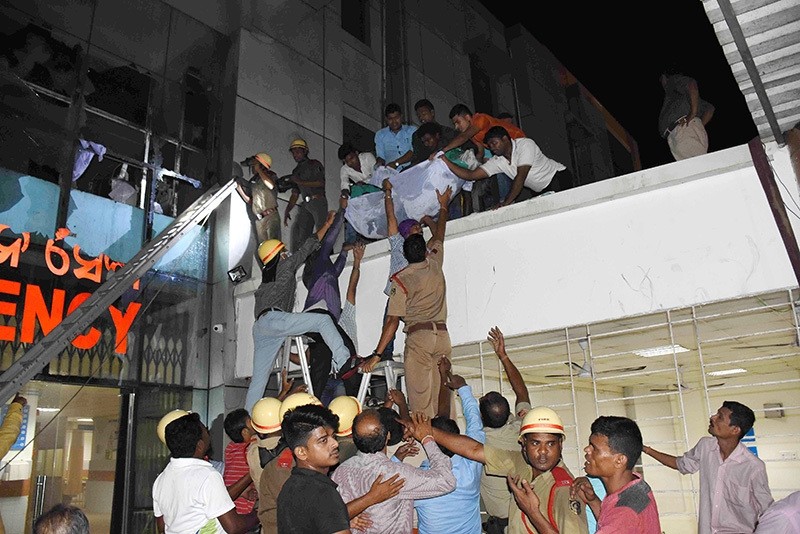 A patient being shifted as rescue work is in progress after a fire broke out in the Intensive Care Unit (ICU) of SUM hospital in Bhubaneswar, killing 23, eastern India, Oct. 17 2016. (EPA Photo)
by Compiled from Wire Services Oct 18, 2016 12:00 am

A fire broke out late Monday at a private hospital in a city in eastern India, killing at least 23 people, India's federal health minister said.

Minister J.P. Nadda disclosed the death toll from the fire at the Sum Hospital in the city of Bhubaneswar in an interview with the Times Now TV news station.

Doctors at two local hospitals had told the Press Trust of India news agency that 22 people were dead on arrival at their facilities.

They said more than 20 people were being treated for injuries. The slight discrepancy in casualty figures could not be resolved.

B.B. Patnak, the director of Capital Hospital, told PTI that most of the victims were patients being treated at Sum Hospital's first-floor intensive care unit who were using ventilators and suffocated after the fire spread to the ICU.

Police and fire fighters broke windows and worked with hospital staff and volunteers in a massive rescue operation to evacuate more than 500 patients from the hospital, an eyewitness and hospital officials told PTI.

Indian Prime Minister Narendra Modi said on Twitter he was "deeply anguished by the loss of lives," and described the event as a "mind-numbing" tragedy.

It took several hours authorities to bring the fire under control.

Eyewitnesses said they saw patients and staff on the hospital's upper floors smashing windows and jumping out to escape.

The cause of the fire was still unclear.

Authorities in Odisha State directed local hospitals to take in patients from Sum Hospital and ordered an investigation into the fire, PTI said.

Incidents like this aren't unheard of in India, where public safety norms are routinely flouted. In 2011, a major blaze engulfed AMRI Hospital in the city of Kolkata, killing 89 people.