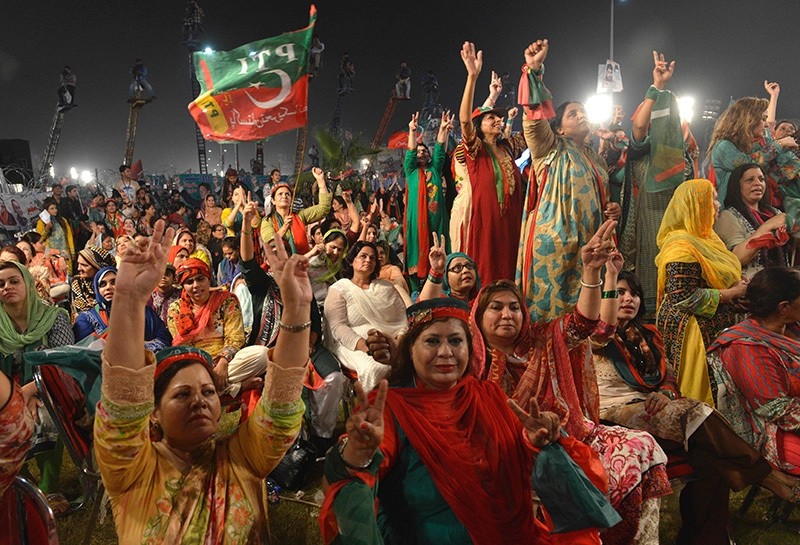 Supporters of Pakistani cricketer-turned-opposition leader Imran Khan (not pictured), who launched a public campaign against Sharif, react during a public meeting in Raiwind, some 40 kilometers from Lahore, on Sept. 30, 2016. (AFP Photo)
by Compiled from Wire Services Oct 20, 2016 12:00 am

Pakistan's Supreme Court Thursday sought a reply from Prime Minister Nawaz Sharif in response to several petitions seeking his resignation over a financial scandal involving his family, piling up pressure on the premier whose government was twice removed in the 1990s.

The court gave Sharif two weeks to submit his response, Sharif's aides and opposition leaders told reporters outside the courthouse.

The premier has been under pressure from the opposition to step down because his family members were named as holders of offshore bank accounts in leaked financial documents from Panamanian law firm Mossack Fonseca.

One of the petitions has come from the opposition party of cricketer turned politician Imran Khan who is threatening to bring tens of thousands of protesters to the capital, Islamabad, on Nov. 2 to press for Sharif's disqualification. This was the first step to make the prime minister answerable to the law, Khan said. "We wanted to have it settled in parliament, but the prime minister didn't present himself there for accountability."

He said the court proceedings didn't mean that he would postpone the street rallies.

Sharif's aide and Pakistani Defense Minister Khawaja Muhammad Asif said the government was ready to be transparent and accountable. "We will never escape," he said. "We're ready for accountability at any forum."

Another of Sharif's ministers Khawaja Saad Rafique said there was no reason for any more protest rallies now that the country's top court had taken up the issue.

The petitions were filed after it emerged in leaked papers - part of the millions disclosed in the so-called Panama Papers leak - earlier this year that Sharif's children bought properties in London through offshore companies.

Opponents accused the premier of money laundering in his one of the previous stints in power in 1990-93.

Sharif said in a statement he welcomes the court proceedings and would respond to allegations against his family.

He can face disqualification if it is proved that he has hidden the wealth of his children.

The development comes as the tensions between Sharif and the powerful military escalated after a report this month that the premier wanted the army to break alleged ties with extremist groups.

The military has ruled Pakistan for half of its existence and has been allegedly pushing civilian leaders to follow its dictates in foreign policy especially relations with neighboring India.

Analysts believe the civil-military tensions might be behind the pressure on Sharif, whose government was twice removed in the 1990s, once by the court and other time by the military.