Philippines President Duterte to visit Japan after US split remarks 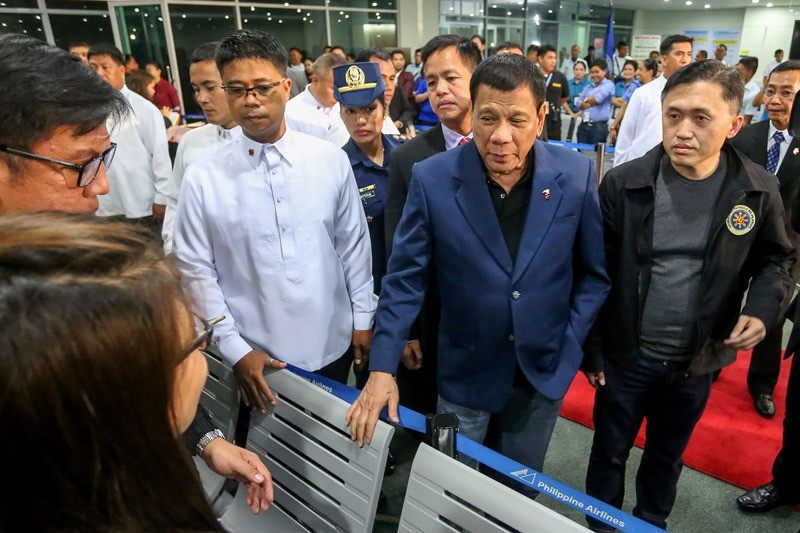 Philippine President Rodrigo Duterte said on October 22 he would not sever his nation's alliance with the United States, as he clarified his announcement that he planned to ,separate,. (AFP Photo)
by Anadolu Agency Oct 23, 2016 12:00 am

Philippines President Rodrigo Duterte is due to arrive in Japan on Tuesday for a two-day official state visit in the wake of his declaration in Beijing of plans to "separate" his country from the United States.

Meeting with Chinese President Xi Jinping in The Great Hall of the People earlier this week, Duterte said, "in this venue I announce my separation from the United States."

He also spoke of "the three of us against the world" -- the three being China, Russia and the Philippines.

That leaves Japan's diplomats and other officials scratching their heads and scrambling to try to understand exactly what he meant by those remarks and how Japan might be expected to respond.

Chief Cabinet Secretary Yoshihide Suga, the government's main spokesman, declined to speculate on what will assuredly be a likely topic of discussion when Duterte meets with Prime Minister Shinzo Abe.

When Abe invited Duterte to visit Japan on the sidelines of the Association of Southeast Asian Nations (ASEAN) summit meeting in Laos in September, Duterte was already causing international controversy with his mouth.

Washington canceled a planned meeting between him and President Barack Obama after Duterte called him a "son of a whore."

Since then the Philippine president has doubled down on his anti-American rhetoric.

This is bound to be very troubling in Tokyo as Washington is Japan's main ally and protector.

Just a little more than one year ago, Tokyo hosted Duterte's predecessor, Benigno Aquino III, who had a completely different approach to relations with the U.S.

Under Aquino the Philippines was America's chief Asian ally behind Japan in disputes in the South and East China seas.

It was Aquino who brought China before an international tribunal concerning Beijing's vast claims in the resource-rich South China Sea.

It was Aquino who invited Japan to use Philippine bases to fly patrols over disputed islands. He signed the Enhanced Defense Cooperation Agreement allowing American military forces to operate from five bases in the Philippines.

Japan recently loaned the Philippines five patrol-trainer aircraft and ten patrol boats, the first of which arrived in Philippine waters in August.

The U.S. has also provided reconditioned coast guard cutters for the Philippine navy.

Duterte has said that his county can get all the armaments it needs from China and Russia.

During his recent visit to China, Duterte came up with billion of dollars worth of loans for infrastructure.

He is planning to meet with Japanese businessmen during his time in Tokyo. Japan is the Philippines' largest trading partner.

Observers believe that the visit next week, which will include an audience with Emperor Akihito, will be in the nature of the two sides getting to know one another rather than getting down to real nitty-gritty discussions.

Up to now Duterte has maintained a generally friendly attitude toward Japan. He has even thanked Japan for what he says is its generous assistance in the aftermath of Typhoon Haiyon in 2013 that devastated the city of Bacalod.