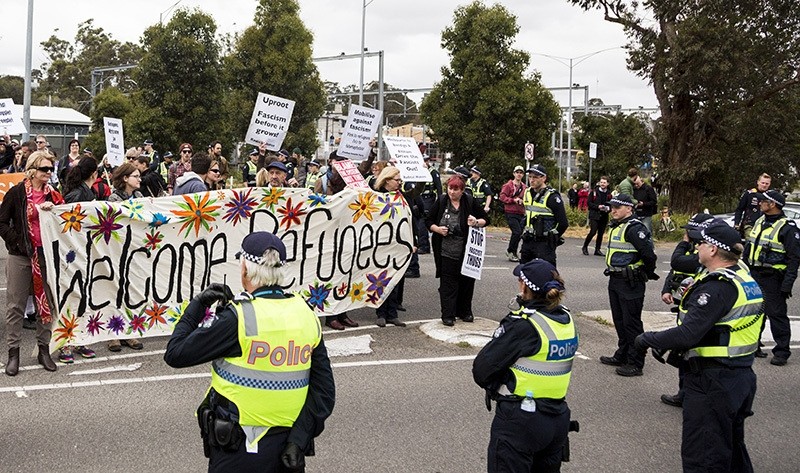 | AA Photo
by Anadolu Agency Nov 05, 2016 12:00 am
Australian police were mobilized to an aged care facility in a peaceful suburb in the state of Victoria on Saturday, after anti-Muslim protesters descended on an area where 120 Syrian and Iraqi refugees are due to be housed.

Nearby, counter-protesters organized by a group named "Welcome to Eltham" -- named after the suburb in which the facility is located -- laid hand-painted butterflies on trees, which they said was the "real" community's way of saying refugees are welcome

The anti-Islam The Party for Freedom (PFF) has dubbed the fight to stop the government housing refugees in the care home the "Battle for Eltham".

Protest organizer and founder of the Australian Protectionist Party (from which TPFF sprang) Nick Folkes referred to the Australian government on his Facebook Page on Saturday as "treasonous" for deciding to place "invaders" in an aged care home, arguing that this move will expose the elderly residents to "danger".

In another post Folkes asks the question: "Isn't it time to sterilize third world refugees?"

The 120 people are part of a one-off humanitarian intake of 12,000 Syrian and Iraqi refugees announced by the then Tony Abbott government last September.

Priority will be given to women and children. No single men will be accommodated.

Folkes, along with a number of the other anti-Muslim protestors -- many of whom, such as the United Patriots Front, Australia First Party and the True Blue Crew, have regularly attended anti-Mosque rallies -- travelled from interstate to participate in the rally.

Welcome to Eltham convener Nina Kelabora rallied the pro-refugee supporters. They opted not to participate in the rally, instead, at the crack of dawn, hanging the more than 8,000 hand-painted butterflies on trees around the local park and laying a carpet of butterflies on the footpath.

In a media release Kelabora said the butterflies are the community's way of saying refugees are welcome.

Police had warned that they would not tolerate any violence at the rally. There were no serious clashes.

Kelabora told Anadolu Agency she put this down to the butterflies, which she maintained countered the hate with peace.

"We have no time for their fear and message of hate. It does not belong in our community," Kelabora said.

"We also didn't want to add any fuel to an already volatile situation so our butterflies are a silent protest from us."

The fence alongside the local park, where the so-called "Battle" was held, was lined with panels filled with thousands of butterflies created by local artists, children and senior citizens and installed by local volunteers.

Victoria Police told Anadolu Agency that there were no arrests or injuries sustained by protestors.