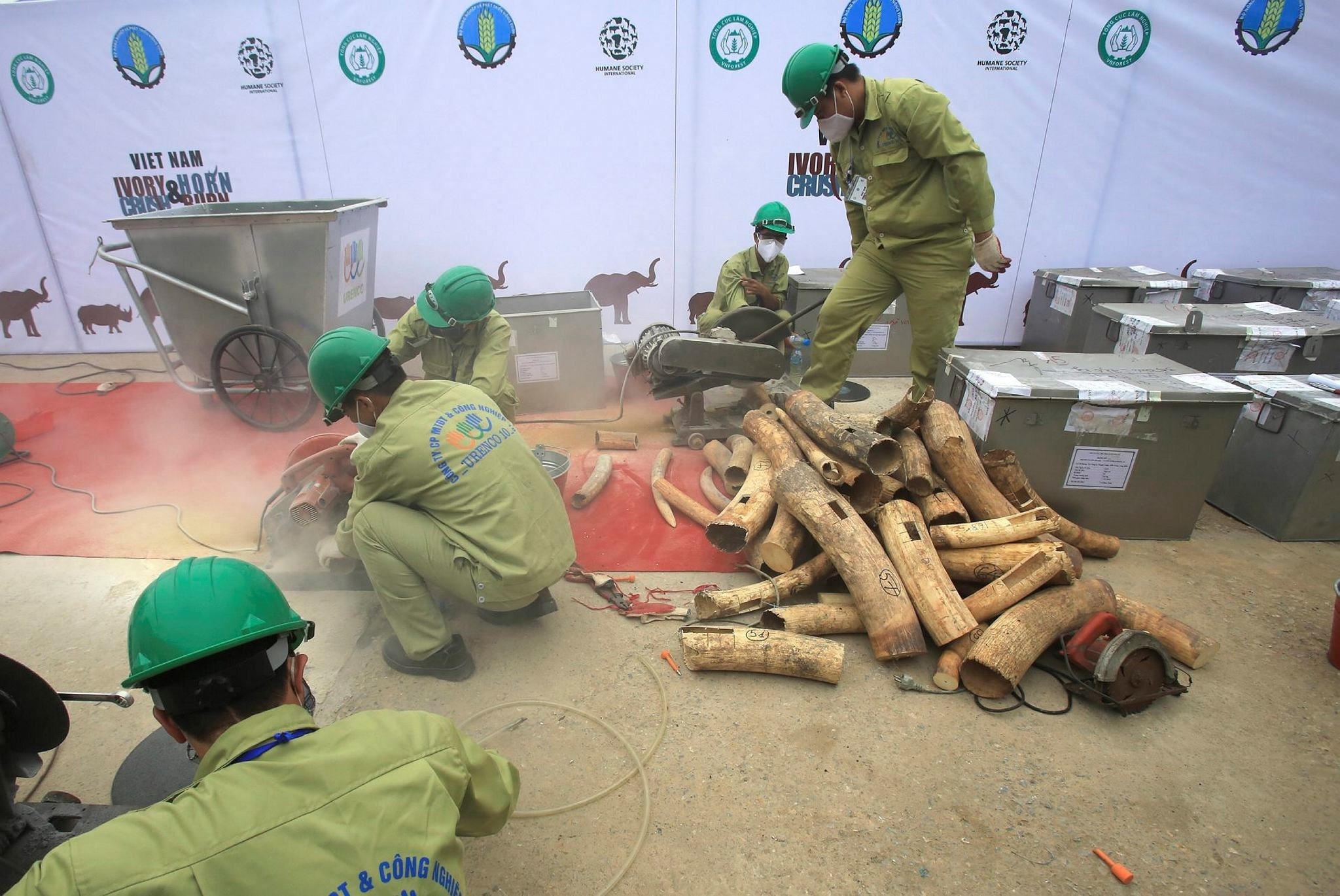 Vietnamese workers cut ivory tusks into pieces in Hanoi, Vietnam, Saturday, Nov. 12, 2016. (AP Photo)
by Nov 13, 2016 12:00 am
Vietnam destroyed nearly 2.2 tonnes of seized elephant ivory and 70 kg of rhino horns on Saturday, in one of its strongest moves yet to stop illegal wildlife trafficking.

The specimens, estimated to be worth more than $7 million on the black market, came from about 330 African elephants and 23 rhinos, said UK-based Humane Society International (HSI), which has been working with the Vietnamese government since 2013 to reduce demand for rhino horn in the country.

Vietnam is a transit point for elephant ivory for consumers in mostly China and the United States to make jewellery and home decorations, while the Southeast Asian nation is a major consumer of rhino horn.

"The destruction today is a clear indication of our government's political determination to fulfil our international duty in conventions to protect wildlife," said Ha Cong Tuan, Vietnam's deputy agriculture minister.

The usage and trading of rhino horn is a criminal offence in Vietnam, but demand is strong due to a long-held belief in rhino horn's medical power as an elixir, especially among the country's growing middle and upper classes.

Saturday's event added Vietnam to a list of 20 other countries that also have crushed or burned seized ivory and rhino horns.

"The more efforts which Vietnam and the Vietnamese government can have to working with other countries to stop the illegal wildlife trade, I think that will really help Vietnam's international image."

The African elephant faces an unprecedented poaching and trafficking threat. Between 2010 and 2012, an estimated 100,000 elephants were killed illegally to meet global demand for ivory, HSI said.

Over the past decade, poachers killed more than 6,000 rhinos across Africa, with more than 1,300 poached in 2015 alone. With only about 29,000 rhinos of five species remaining in the wild, rhinos are facing a crisis, according to HSI.

"If we could do something to reduce demand here, reduce demand in China, maybe wipe it out, that will help rhinos in Africa," said Teresa Telecky, director of the wildlife department at HSI.