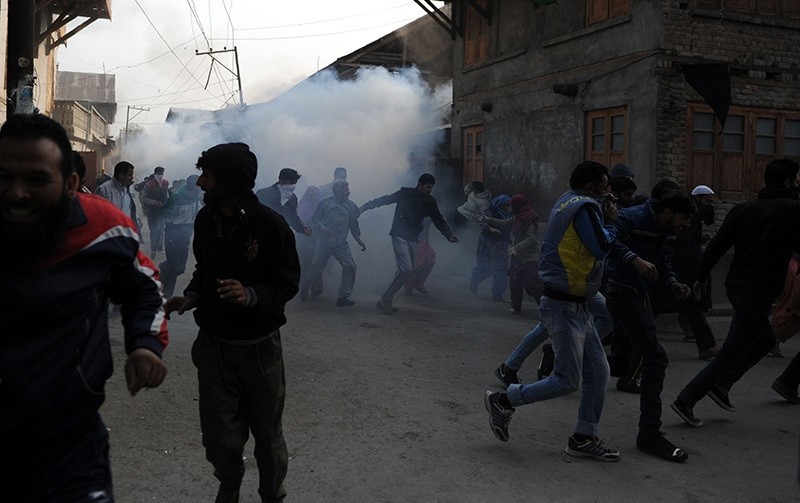 Kashmiri protesters run after Indian police fired teargas shells and pellets during the funeral procession for Qaiser Hamid, 16, killed by Indian forces in Srinagar on Nov. 5, 2016. (AFP Photo)
by Daily Sabah with Agencies Nov 14, 2016 12:00 am

Seven Pakistani soldiers have been killed by Indian shelling on the border in the disputed Kashmir region, the Pakistani military said Monday.

The Inter Services Public Relations (ISPR) agency said firing by India forces at the Bhimber sector of the Line of Control on Sunday night caused the deaths.

Intensified shelling along the frontier has claimed dozens of lives, including civilians, on both sides in recent weeks. Tensions in the region were raised in July following pro-independence protests of Pakistanis in the Indian-occupied region. Relations between the two countries have plummeted in recent months.

Indian and Pakistani troops regularly exchange fire across their de-facto border in Kashmir, but rarely send ground troops over the line. Muslim-majority Kashmir has been divided between India and Pakistan, but claimed in full by both, since the two countries gained independence from Britain in 1947. Since 1989, Kashmiris have been fighting Indian forces deployed in the region, seeking independence or a merger of the territory with Pakistan.

Since the dispute of Kashmir, one of the oldest disputes on the agenda of the UN Security Council along with that of Palestine erupted in 1947 between India and Pakistan, more than 94,000 Kashmiris have been killed during clashes, according to Pakistani officials' reports.