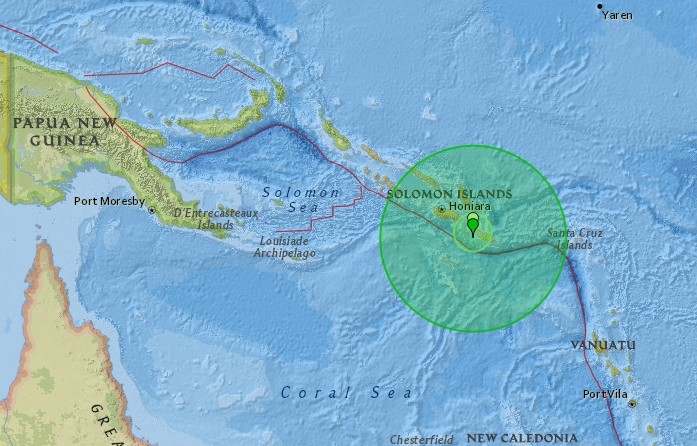 Tsunami warnings for several Pacific islands, including those in Hawaii, were canceled Friday after authorities determined that a powerful magnitude 7.8 earthquake that struck near the Solomon Islands did not pose a broad tsunami threat.

The Pacific Tsunami Warning Center said waves of up to 3 meters (10 feet) were still possible along the coast of the Solomon Islands and smaller tsunami waves could hit Papua New Guinea.

There were reports of some power outages in the Solomon Islands, although there were no immediate reports of widespread damage or injuries from the quake.

The U.S. Geological Survey said the quake hit about 200 kilometers (120 miles) southeast of Honiara, the capital of the Solomon Islands. The epicenter was relatively deep at 48 kilometers (30 miles) below the surface. Deeper quakes generally cause less damage on the ground.

"Hazardous tsunami waves from this earthquake are possible within the next three hours along some coasts of Solomon Islands, Vanuatu, Papua New Guinea, Nauru, New Caledonia, Tuvalu and Kosrae," the U.S.-based Pacific Tsunami Warning Center (PTWC) had previously warned.

But PTWC cancelled an initial tsunami watch alert for Hawaii.

"Based on all available data, there is no tsunami threat to the state of Hawaii," the PTWC said.

Australian authorities also said there was no risk to its coastlines, while the New Zealand Civil Defence office said it was evaluating the threat.

Calls to emergency services officials in the Solomons and Vanuatu rang out.

The Solomon Islands are located in the Pacific's geologically active "Ring of Fire."