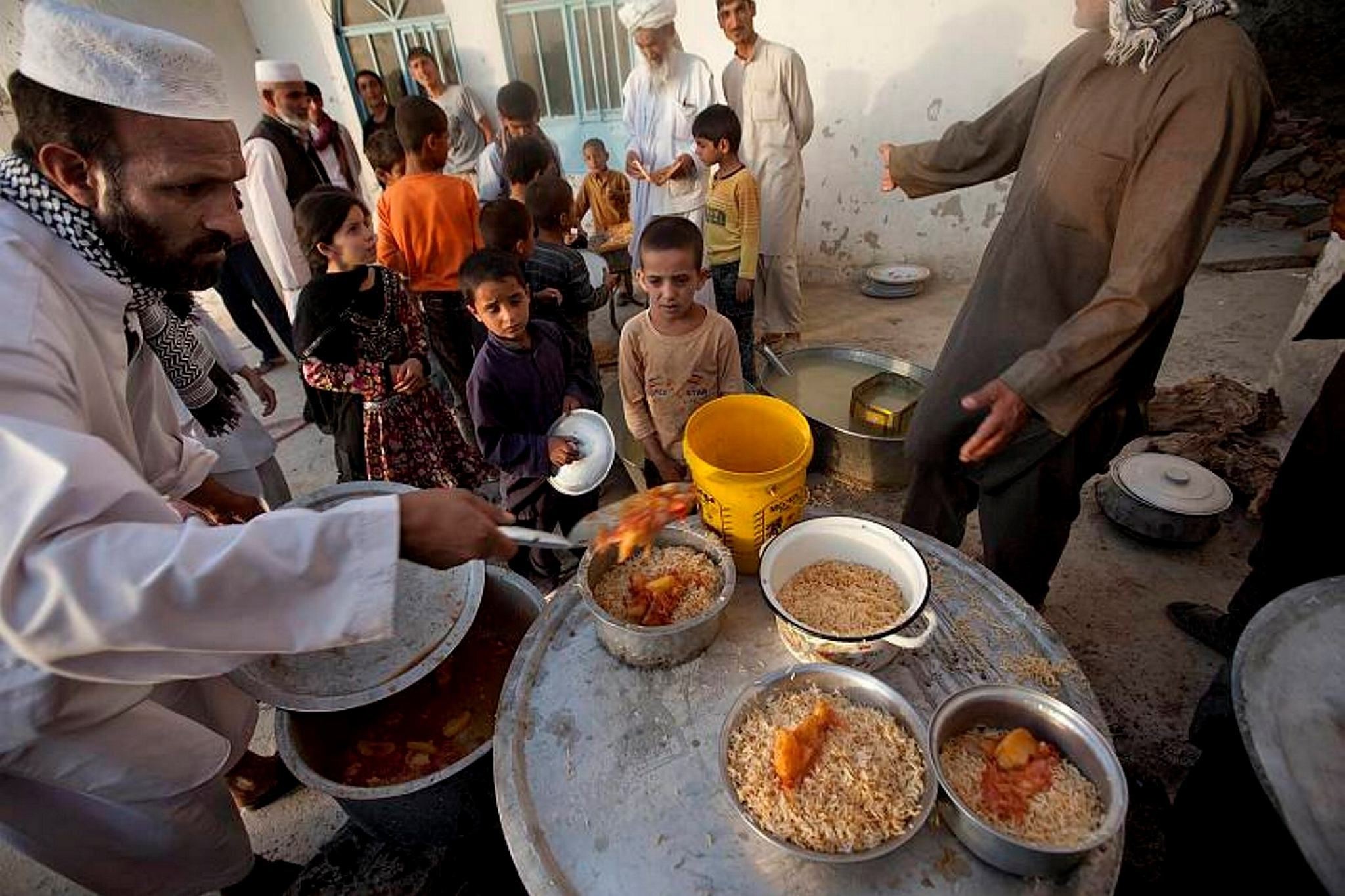 Afghan children stand in a queue as they receive food distributed on the first day of holy month of Ramadan outside a mosque in a poor neighborhood of Kabul, Afghanistan.
by Yusuf Selman İnanç Dec 12, 2016 12:00 am

High unemployment, lack of access to education and security fears in their war-torn country spell a future devoid of hope for most Afghans, a report reveals

Throughout its history, Afghanistan has long been regarded as one of the major centers of Islamic civilization and home to several dynasties. Its geography has enabled Afghanistan to bridge Central Asia to Iran and to India; its madrasas and Sufi lodges were boosted by visits from many important figures in Islamic history.

However, with the American invasion, emergence of radical groups like the Taliban and Daesh, have all but prolonged the political and economic straits of the already-poor country, worsening its situation.

The U.S.-based Asia Foundation, which has been tracking the country since 2004, has conducted a comprehensive survey to reveal the country's current economic and social situation.

In a survey carried out in all its 34 provinces and with 12,658 Afghans from 16 different ethnic groups participated, its reports that "Afghans in 2016 are more fearful for their security, more dissatisfied with the economy, and less confident in their government."

"Repercussions of the withdrawal of international troops in 2014 can still be felt in the Afghan economy, where slow job growth has contributed to high rates of urban unemployment, and more than one-third of Afghans say their household financial situation has become worse in the past year. The promise of electoral reform, a key issue ahead of the upcoming parliamentary elections, remains stalled, and most Afghans say they have no confidence in the Independent Elections Commission to do its job. Confidence in every level of government appears to have fallen since 2015," the report claimed.

Revealing the misery of Afghan citizens, the report said only 29.3 percent of Afghans believe their country is going in the right direction, while more than 60 percent had no hope for a brighter future.

The biggest problem for the Afghan youth was unemployment, which stands at around 50 percent, leading more than half of the young participators to say they would leave the country as soon as an opportunity knocks.

"Motivations to emigrate include a combination of 'push' and 'pull' factors. Push factors are domestic circumstances that motivate people to leave their country, such as economic, social, political, or security problems. Pull factors are external influences that attract would-be migrants to a particular destination, such as the destination's reception and resettlement policies, or the presence there of family and friends. Respondents who say they would leave Afghanistan are asked to give two reasons. Almost three-quarters (73.6 percent) cite insecurity as one of two reasons, including answers such as 'Taliban are killing people,' 'suicide attacks,' 'fear of Daesh,' and 'kidnappings.' Another 28.8 percent of respondents cite concerns relating to weak governance.

Besides these, illiteracy and inaccessibility to educational facilities have also appeared as some of the major problems.

"More than half of Afghans (52.0 percent) report having no formal or informal government or private education, including two-thirds (66.4 percent) of women and 37.7 percent of men. Just over half (51 percent) of women say they have never been to a government school nor a madrasa for any type of education, compared to less than a quarter of men (23.4 percent)," the report said.

Meanwhile, security continues to remain one of the biggest problems in the country, as peace talks with the Taliban failed at the beginning of this year and led to more deadly attacks all across the country. Some 70 percent of the participators said they were in fear of their own security, as suicide attacks, kidnapping and physical assault are very common in the country.
RELATED TOPICS