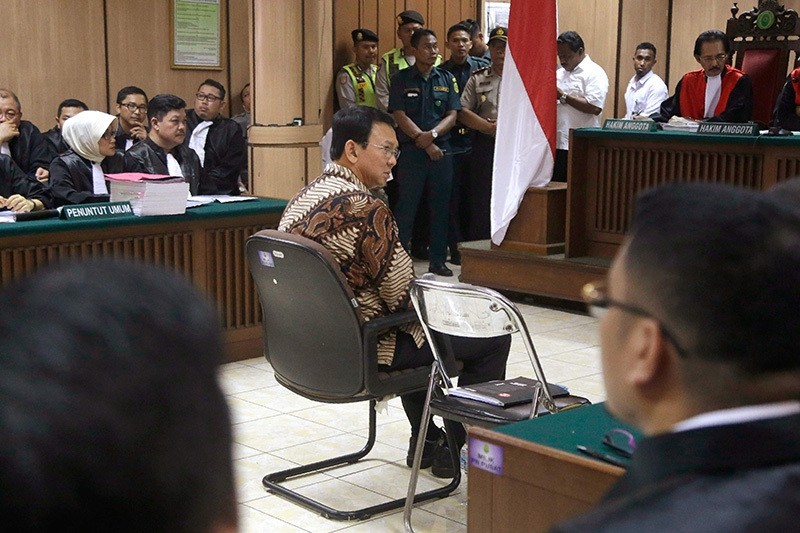 Jakarta Governor Basuki Tjahaja Purnama, better known by his nickname Ahok, sits in the defendant's chair during his trial at the North Jakarta District Court in Jakarta, Dec. 13, 2016. (AFP Photo)
by Compiled from Wire Services Dec 13, 2016 12:00 am

The governor of the Indonesian capital went on trial Tuesday on charges of blasphemy over remarks insulting to Muslims in his speech in September.

Jakarta Governor Basuki Tjahaja Purnama is accused of "publicly expressing hostility to, abusing and disparaging" a religion, a crime punishable by up to five years in prison.

Security was tight for the trial at the North Jakarta district court and hundreds of people dressed in white gathered outside to demand Purnama be jailed.

The governor bowed to the panel of five judges before being seated alone in the centre of the courtroom as proceedings began.

The blasphemy allegations stem from remarks made by Purnama in September, when he was accusing his opponents of using a verse from the Quran to deceive voters.

Purnama, better known by his nickname Ahok, could be jailed for up to five years if found guilty of breaking Indonesia's blasphemy laws.

Tensions have risen in Jakarta after more than 100,000 Muslims rallied on November 4 demanding the prosecution of Purnama.

A second anti-Purnama rally on December 21 was attended by more than 200,000.