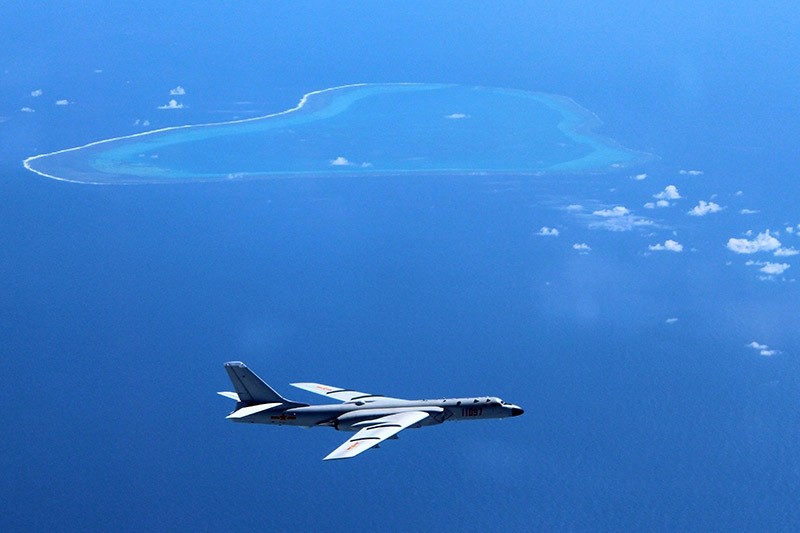 In this undated file photo a Chinese H-6K bomber patrols the islands and reefs in the South China Sea. (AP Photo)
by Compiled from Wire Services Dec 15, 2016 12:00 am

A U.S. think tank has reported that China has installed anti-aircraft and anti-missile weapons on its man-made islands in the strategically vital South China Sea, to which China reacted on Thursday by stating that it's a regular arms transfer, far from militarization.

The Center for Strategic and International Studies said in a report late Wednesday that the anti-aircraft guns and close-in weapons systems designed to guard against missile attack have been placed on all seven of China's newly created islands.

The outposts were built in recent years, despite objections by the U.S. and rival claimants, by piling sand on top of coral reefs, followed by the construction of military grade 3,000-meter (10,000-foot) airstrips, barracks, lighthouses, radar stations and other infrastructure.

CSIS based its conclusions on satellite images taken in mid-to-late November and published on the website of its Asia Maritime Transparency Initiative.

China reacted on Thursday against the allegations of militarization of the islands, saying that the deployment of weapons in the South China Sea had "nothing to do with militarization", calling the construction of defensive facilities "normal."

Speaking at a regular press briefing, foreign ministry spokesman Geng Shuang told journalists that he was not aware of the report, but said that islands in the South China Sea were the country's "inherent territory."

"To conduct construction on China's own territory and deploy necessary national defence facilities is quite normal," he said, also adding that the deployment of defensive weapons had "nothing to do with militarization."

China's defence ministry said on a verified social media account that the construction was mostly for civilian use, and that necessary military installations were for self-defence. The statement wrote "If someone were flexing his muscles outside your door, wouldn't you get a slingshot ready?"

Tensions in the strategic area have been brewing for years, with China, the Philippines, Brunei, Malaysia and Vietnam making competing claims in the waters with vital global shipping routes and what are believed to be significant oil and natural gas deposits.

The US has sailed warships near the islands, but the ships have not passed within the 12 nautical mile zone that international law defines as territorial waters.

Such missions have drawn howls of fury from China, which accuses Washington of provocation and increasing the risk of a military mishap. At a meeting with Barack Obama in 2015 China's president Xi Jinping pledged Beijing "does not intend to pursue militarization" in the South China Sea.

The Permanent Court of Arbitration in The Hague ruled in July that there was no legal basis to China's claims to nearly all of the South China Sea, a verdict which Beijing has dismissed.