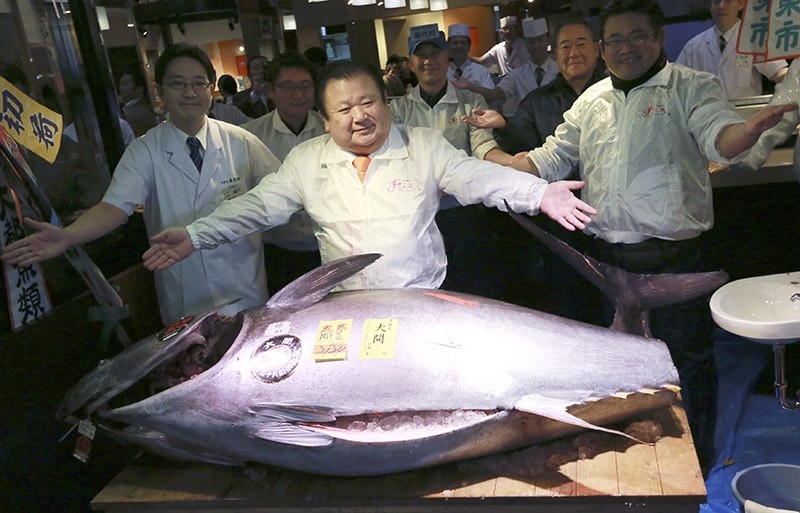 Kiyoshi Kimura, center, president of Kiyomura Co., poses with the bluefin tuna he made a winning bid at the annual New Year auction, at his Sushi Zanmai restaurant near Tsukiji fish market in Tokyo, early Thursday, Jan. 5, 2017. (AP Photo)
by Associated Press Jan 05, 2017 12:00 am

The head of the Sushizanmai chain is now the proud - if temporary - owner of a 212-kilogramme (467-pound) fish.

At that price a single piece of fatty tuna sushi would cost roughly $85, or 25 times the $3.4 that Kimura charges for the product at his 51 stores across Japan.

"I feel it was a bit expensive, but I am happy that I was able to successfully win at auction a tuna of good shape and size," Kimura said.

Later in the day, Kimura and his fellow sushi chefs sliced up the giant fish with special knives resembling a Japanese sword at its main restaurant near the market, as hundreds of sushi lovers waited for a taste or two.

"As always, I want to buy the best one so that our customers can have it. That's all," Kimura said when asked about the auction result.

He has built his successful chain into a national brand by paying big money at Tsukiji's first auction every year - he has now won for six straight years - essentially using the event for publicity.

He paid a record $1.8 million for a bluefin - a threatened species - at the New Year auction in 2013, outbidding a rival bidder from Hong Kong.

The prices may seem enormous, but Kimura makes sure to get the most out of his money.

Every year, the boisterous auction, which takes place in the small hours, makes national headlines.

Japan consumes a large portion of the global bluefin catch, a highly prized sushi ingredient known in Japan as "kuro maguro" (black tuna) and dubbed by sushi connoisseurs as the "black diamond" because of its scarcity.

"But a huge volume of tuna on retail display could make people forget that it's actually an endangered species," she told.

The 2017 auction could be the last at Tsukiji, the world's largest fish market.

It was originally supposed to move to a new location in November, but the plan was put on hold until at least late this year over concerns about toxic contamination at the new site.

Tokyo governor Yuriko Koike said in November that the move could even be delayed until the "spring of 2018" depending on results of health and environmental tests.

But she also held out the possibility of scrapping the relocation altogether.