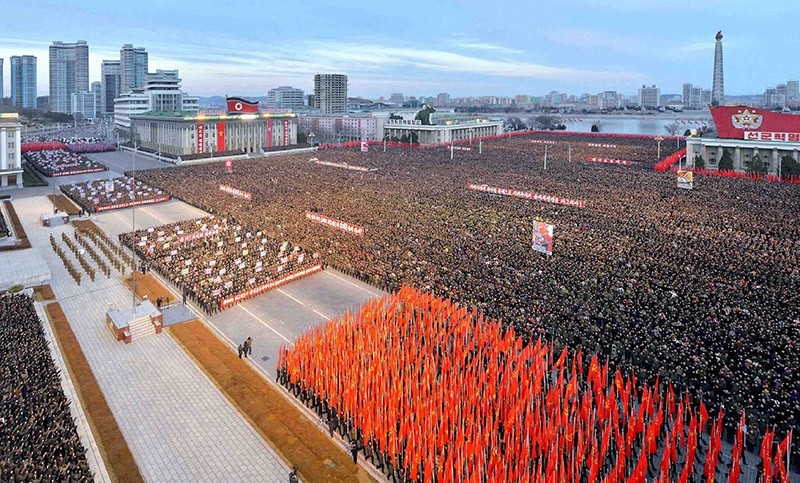 Thousands of North Koreans have rallied in Pyongyang, chanting communist slogans and vowing support for leader Kim Jong-Un, who in his New Year's message announced plans to test-fire a ballistic missile capable of reaching the US mainland.

Clad in thick winter coats and pumping their fists in the air, those assembled in Kim Il-Sung square chanted "long live comrade Kim Jong-Un" and held banners proclaiming "let us accelerate the victorious advance of socialism!"

Kim marked the New Year with a 30-minute televised speech that largely focused on the country's rise as a nuclear power, announcing that it was in the "final stages" of developing an intercontinental ballistic missile of the kind that could threaten U.S. soil.

"The people should regard Kim Jong-Un's New Year address as a motto of life and struggle," state media KCNA quoted a party official at the rally as saying.

In 2016, North Korea conducted two nuclear tests and numerous missile launches in its quest to develop a nuclear weapons system capable of hitting the U.S. mainland, prompting Washington to reinforce its antimissile defenses in the region.

But analysts are divided over how close Pyongyang is to realising its full nuclear ambitions, especially since it has never successfully test-fired an intercontinental ballistic missile.

Kim also admitted to his "shortcomings" as a leader in his New Year's speech and pledged "devoted efforts" to make North Korea prosperous again.

Thae Yong-Ho, North Korea's former deputy ambassador to Britain who defected to the South in August, has referred to growing public discontent about the leadership, saying ordinary North Koreans have had to learn ways to survive on their own rather than relying on the party.