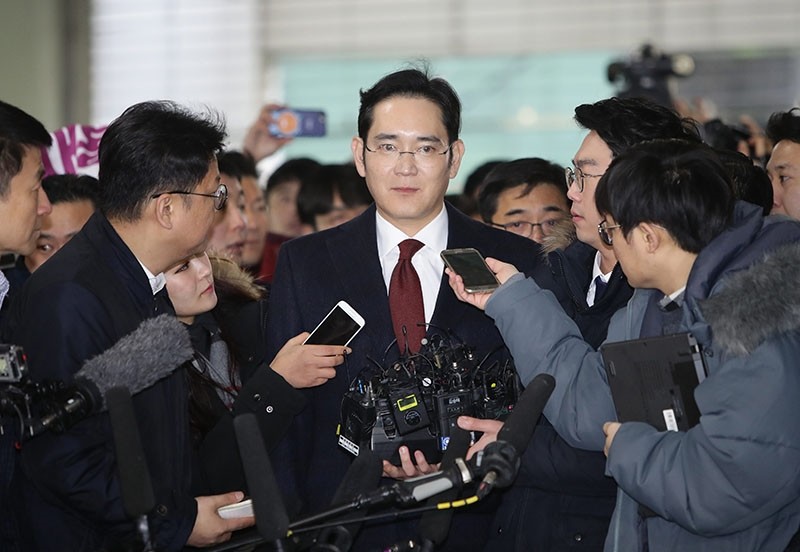 A file picture dated 12 January 2017 shows Lee Jae-yong, Vice Chairman of Samsung (C) arriving to the office of the Independent Counel for questioning in Seoul, South Korea. (EPA Photo)
by Compiled from Wire Services
Jan 16, 2017 12:00 am

In a departure from the leniency typically given South Korean big businesses, prosecutors on Monday requested the arrest of the de facto head of Samsung Electronics, the country's most valuable company, in an influence-peddling scandal that has toppled the country's president.

Lee Jae-yong, the 48-year-old vice chairman at Samsung Electronics, faces allegations of embezzlement, of lying under oath during a parliamentary hearing and of offering a bribe of 43 billion won ($36 million) to a long-time friend of impeached President Park Geun-hye, according to Lee Kyu-chul, a spokesman for a special prosecutors' team investigating the political scandal.

It will surprise many that prosecutors requested the arrest of the man who symbolizes the future of South Korea's most important chaebol, as family-controlled conglomerates are known. Such leaders tend to be treated as vital for the national economy.

Samsung Electronics is South Korea's most successful company and a source of pride for many who equate its huge global success with national prestige. The company has gone through a rough patch in the past half-year, however, after its latest premium smartphone was found to be prone to catching fire.

Prosecutors understood worries that Lee's arrest could hurt the economy, but "we believed that it was even more important to carry out justice," Lee, the spokesman at the special prosecutors' team, told reporters.

A Seoul court said it will review the prosecutors' request on Wednesday. The request takes two to three days to review, according to a Seoul court official in charge of arrest warrants who declined to give his name because of office rules.

"The public demand that chaebol, especially Samsung, should not be an exception and that everyone should be equal before laws has become stronger," said Kim Sang-jo, executive director of Solidarity for Economic Reforms, a private watchdog on big businesses. "Prosecutors and judicial institutions cannot ignore the huge pressure from the public."

Choi is accused of using her ties with the president to coerce top local firms into "donating" nearly $70 million to dubious non-profit foundations which Choi then used as her personal ATMs, in exchange for political favors.

Samsung is the single biggest contributor to the foundations and separately paid Choi millions of euros, allegedly to bankroll her daughter's equestrian training in Germany.

Lee, 48, who was questioned in a marathon 22-hour session last week, is accused of bribery and embezzlement for approving decisions to pay Choi 43 billion won ($36.4 million), and of perjury at a parliamentary hearing, the prosecution spokesman said.

In a statement Samsung said the prosecutors' decision was "hard to understand".

"There was no support that sought something in return," it said.

Prosecutors are probing whether Samsung's payments were aimed at securing government approval for a 2015 merger of two of its units.

The merger of Cheil Industries and Samsung C&T was seen as a key step towards ensuring a smooth third-generation power transfer to Lee.

It was opposed by many investors who said it willfully undervalued Samsung C&T's shares. But it was backed by the National Pension Service, a major Samsung shareholder.

Former welfare minister Moon Hyung-Pyo was formally charged Monday with abuse of power for allegedly pressuring the fund's managers to approve the deal.

Park was impeached by parliament last month, and the constitutional court is deciding whether to uphold the decision.

Choi, who is currently on trial for coercion and abuse of power, appeared at its proceedings for the first time on Monday.

She choked with emotion at one point and denied seeking any financial favors using her presidential connections.

Choi admitted visiting the presidential Blue House several times to help Park handle "personal matters" and had shared an e-mail account with a senior presidential aide to edit some of Park's speeches.

But she insisted she had no role over the Samsung merger: "It's way too complicated for me."