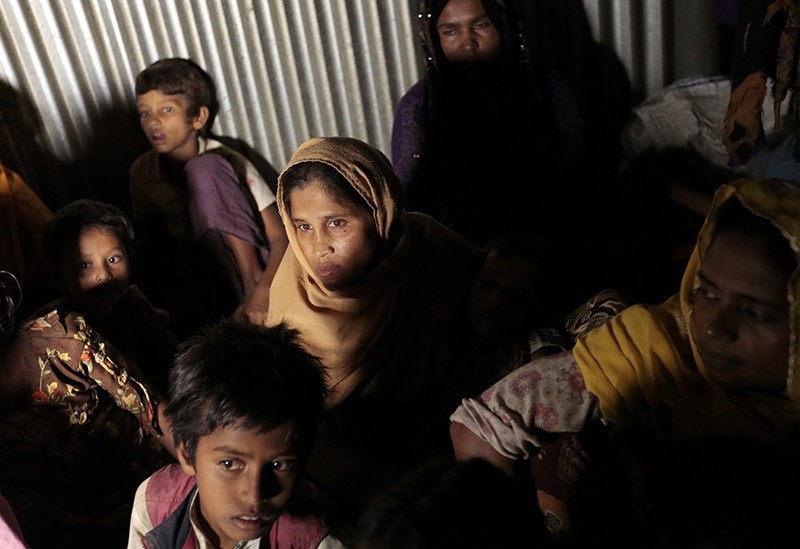 In this Dec. 2, 2016 file photo, Rohingya from Myanmar who recently crossed over to Bangladesh huddle in a room at an unregistered refugee camp. (AP Photo)
by Compiled from Wire Services Feb 03, 2017 12:00 am

U.N. human rights investigators have chronicled new accounts of crimes including beatings, disappearances and brutal killings of children as young as 8 months old by Myanmar security forces against the Muslim Rohingya minority.

A U.N. human rights office report on Friday cites accounts of 204 people interviewed by U.N. staffers after fleeing to neighboring Bangladesh since October. The report says crimes against humanity were "very likely" committed.

Witnesses had testified to "the killing of babies, toddlers, children, women and elderly; opening fire at people fleeing; burning of entire villages; massive detention; massive and systematic rape and sexual violence; deliberate destruction of food and sources of food", the report said.

One woman told U.N. investigators how her eight-month baby boy had had his throat slit. Another was raped by soldiers and saw her five-year-old daughter killed as she tried to stop them.

"The devastating cruelty to which these Rohingya children have been subjected is unbearable," U.N. High Commissioner for Human Rights Zeid Ra'ad al Hussein said in a statement.

"The 'area clearance operations' have likely resulted in hundreds of deaths," the U.N. report said.

Around 66,000 people have fled from the Muslim-majority northern part of Rakhine State to Bangladesh since Myanmar's military launched a security operation in response to attacks on police border posts on Oct. 9, the U.N. report said. The U.N. humanitarian office has recently put the figure at 69,000.

The plight of the stateless Rohingya, of whom some 1.1 million live in apartheid-like conditions in Rakhine, has long been a source of friction between Myanmar and Bangladesh.

Myanmar has denied almost all allegations of human rights abuses in northern Rakhine and says a lawful counterinsurgency campaign is under way.

Zeid called for a robust reaction from the international community and said Myanmar must accept responsibility for committing grave human rights violations against its own people.

"What kind of hatred could make a man stab a baby crying out for his mother's milk? And for the mother to witness this murder while she is being gang-raped by the very security forces who should be protecting her - what kind of 'clearance operation' is this?" he asked.

"What national security goals could possibly be served by this?"

Bangladesh is determined to relocate Rohingya Muslims fleeing violence in Myanmar to an island in the Bay of Bengal, a Bangladeshi minister said on Wednesday. Critics say the island is uninhabitable. The minister said the move was temporary and Myanmar would ultimately have to take the Rohingyas back.