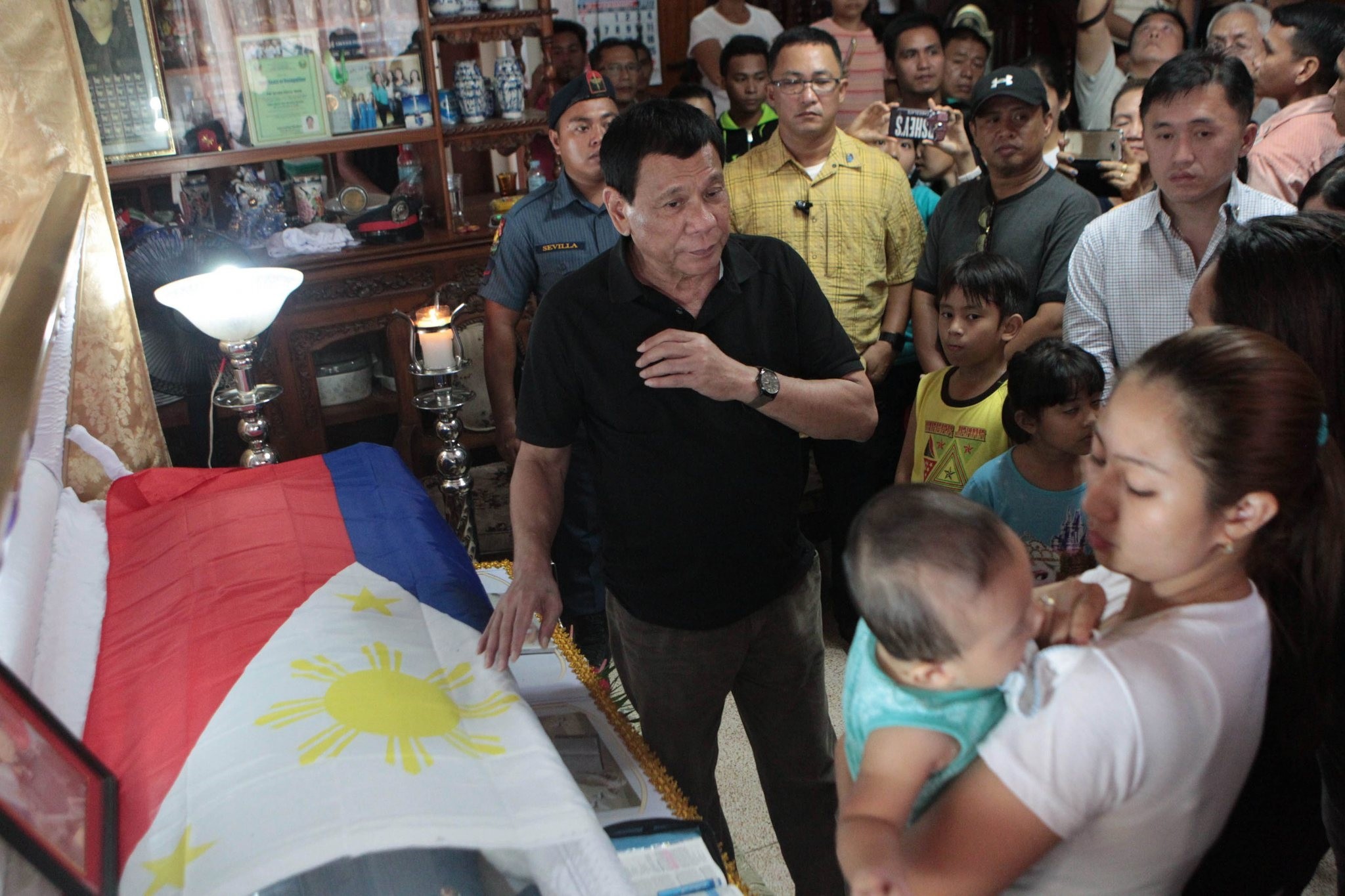 Filipino President Rodrigo Duterte (C) mourning on the coffin of Police Officer Jerome Ruefa, who according to authorities was killed by members of communist rebel group. (EPA Photo)
by Associated Press Feb 04, 2017 12:00 am

Philippine President Rodrigo Duterte said Saturday he would scrap peace talks with communist rebels and asked several rebel leaders who were freed for the negotiations to return to prison or face arrests in the latest blow to efforts to peacefully settle one of Asia's longest-running rebellions.

Duterte said at a late-night news conference in southern Davao city that he would ask government negotiators not to participate in talks with the Maoist guerrillas scheduled to resume this month in Norway, repeating that "peace with the communists might not come in this generation."

Duterte made his remarks a day after he lifted the government's 6-month-old cease-fire with the rebels and ordered troops to prepare for new fighting after the guerrillas abandoned their own truce and killed six soldiers in fresh violence.

Some of the soldiers were killed like wild pigs and raked with gunfire, Duterte angrily said.

"I'm not ready to resume," Duterte said. "I will request the Philippine contingent to fold their tents and to come home."

Asked if he was scrapping the talks, Duterte said, "Yes, entirely," adding that the peace negotiations could resume after his six-year term ends in 2022.

Though his talk was tough, Duterte said he may reconsider his decision if there was a compelling reason, but did not elaborate. Resuming talks with the Communist Party of the Philippines and its armed wing, the New People's Army, and Muslim rebel groups was one of his key campaign promises, along with launching a crackdown against illegal drugs.

"I tried everything. I walked the extra mile, released prisoners, released their leaders so they can go to Oslo to talk," Duterte said, but added that the guerrillas have made excessive demands, including the release of more than 400 mostly captured rebels and left-wing detainees.

Freeing such a large number of rebel allies amounted to a general amnesty, which usually comes at the end of successful peace negotiations, he said, suggesting that he would lose a bargaining chip if he yielded to the rebels' demand.

Duterte called on several rebel leaders, who were freed to join the peace talks in Europe as consultants, to fly back to the country and return to prison, threatening to ask the police to arrest them if they will refuse.

The hostile moves are a blow to ongoing talks brokered by Norway that have progressed steadily in recent months toward the goal of ending one the 48-year Marxist insurgency, which has left about 40,000 combatants and civilians dead.

The rebels and the government declared separate cease-fires last year as they resumed peace talks. That allowed the government to withdraw troops from battlefields to focus on a monthslong offensive against the Abu Sayyaf and other Muslim extremist groups in three battlefronts in the south.

The prospect of new fighting with the Maoist rebels, estimated to number 3,700, comes after Duterte announced that he would enlist the already overburdened military in his anti-drug crackdown after prohibiting the national police and the National Bureau of Investigation — the Philippine counterpart of America's FBI — from enforcing his brutal campaign due to corruption and an extortion scandal.

The rebels announced Wednesday that they would halt their cease-fire Feb. 10 after accusing the government of reneging on earlier pledges to free more left-wing detainees and raising concerns over Duterte's brutal anti-drug crackdown and his allowing the burial of long-dead dictator Ferdinand Marcos in a heroes' cemetery.

Founded in 1968, the rural-based guerrilla group has unsuccessfully tried to negotiate an end to its rebellion with six Philippine presidents, including Duterte.

Battle setbacks, surrenders and infighting have weakened the rebel group, which is considered a terrorist organization by the United States.