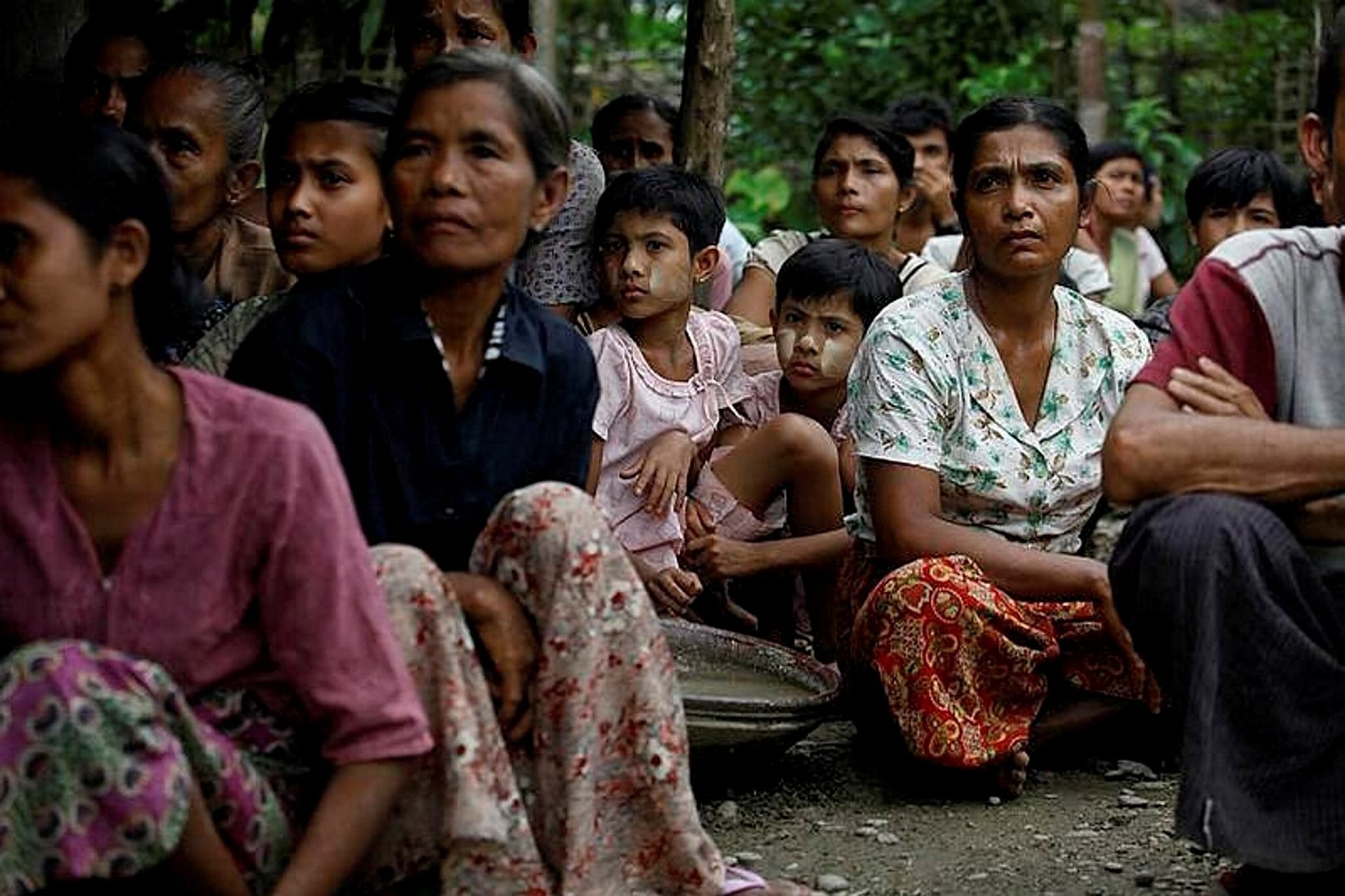 Rohingya Muslums sit in a temporary refugee camp after losing their homes during the violence in the Rakhine state.
by Yusuf Selman İnanç Feb 06, 2017 12:00 am

While Rohingya Muslims face a new wave of persecution by the Myanmar army, which has recently carried out several raids killing hundreds, the Bangladeshi government proposes to relocate Rohingyas on a remote and dangerous island

Rohingya Muslims are the most persecuted minority in the world according to U.N. figures and continue to suffer from oppression under the Myanmar government, the army and Buddhist extremists. Over the past decade, thousands of Rohingyas have been killed since violence broke out in 2008, causing hundreds of thousands to flee their homeland for Bangladesh, Malaysia and other countries in the region.

Although the Myanmar government claimed investigations had been launched, Rohingyas have been rocked with new army raids. Since it is not easy for journalists to cover the developments in Myanmar on the ground, the number of casualties is not exactly known. However, hundreds are estimated to have been killed and thousands were forced to flee in recent months. Despite the U.N.'s several desperate calls on the Myanmar government to stop the persecution and on the international powers to place sanctions on the Buddhist Asian country, no major step has been made.

The U.N. has issued a 43-page report on the human rights violations and U.N. staff has conducted in-depth interviews with 204 survivors. "The vast majority reported witnessing killings, and almost half reported having a family member who was killed as well as family members who were missing," rights office spokeswoman Ravina Shamdasani told reporters in Geneva. "Of the 101 women interviewed, more than half reported having suffered rape or other forms of sexual violence." Mosques were occupied by soldiers, used as sites for rape or burned down, the report said. Shamdasani cited "especially revolting" accounts of children being "slaughtered with knives" and said one 8-month-old infant was reportedly killed while his mother was gang-raped by five security officers. "What kind of hatred could make a man stab a baby crying out for his mother's milk?"

U.N. rights chief Zeid Ra'ad al-Hussein said in a statement to the Associated Press on Friday: "The report is likely to raise pressure on the governing party of Nobel Peace Prize-winning Aung San Suu Kyi amid numerous allegations that soldiers have been killing and raping Rohingya and burning their homes, targeting the people based on their religion and ethnicity. Rohingyas have long faced discrimination in Rakhine state, where many Rohingyas live and tensions have been high with the Buddhist community." However, it is unlikely that the president will take action as similar calls have been repeatedly made. Several human rights groups have called on the U.N. and international powers to exert pressure on the Myanmar government. However, Kyi has paved the way for the country to establish good relations with Europe and the U.S. after the decades-long junta rule. Expecting Kyi to support the democratization of the country, the Nobel Peace Prize winner never mentioned the persecution of Rohingyas. For instance, last December, more than 10 Nobel laureates urged the U.N. to increase pressure on Myanmar saying in a letter, "If we fail to take action, people may starve to death if they are not killed with bullets and we may end up being the passive observers of crimes against humanity, leading us to once again wring our hands belatedly and repeat the dreaded words 'never again.'"

The very word "Rohingya" means "from Arakan" and refers to the historical origins of ethnic Rohingyas who fled Arakan for Burma, now modern-day Myanmar, when the British began to colonize Southeast Asia. Following the collapse of the Arakan Kingdom, this ethnic group fled enslavement in their native lands for other countries in the region and has faced persecution for centuries. The country of Burma, renamed Myanmar in 1989, has refused to grant citizenship to the Rohingyas ever since, issuing temporary identity cards known as "white cards" to these internally displaced persons (IDPs). Amid increasing pressure from Buddhist extremists, the government canceled the Rohingyas' right to vote, previously granted in 2015, immediately before a constitutional referendum was held. Furthermore, the government interferes in every aspect of their daily lives; barring everything from the establishment of businesses to obtaining work and even marriage. Ongoing violence and discriminatory state policies compel Rohingyas to flee. While 140,000 currently live in refugee camps in Myanmar, there are also 130,000 in Malaysia and as many as 300,000 in Bangladesh and many of them are unregistered immigrants who used smuggler boats to escape persecution. The Rohingyas have also begun to take refuge in Indonesia and a few thousand have already settled in the country.

Rohingyas are not especially welcome in Bangladesh either. The Bangladeshi government has proposed to relocate the refugees on a remote island. "The island is two hours by boat from the nearest settlement. There are no buildings, no mobile phone reception or people. During the monsoon it often floods and, when the seas are calm, pirates roam nearby waters hunting for fishermen to kidnap for ransom — Welcome to Thengar Char, a muddy stain in the murky waters of the Bay of Bengal, identified by Bangladesh as a short-term solution to the humanitarian crisis unfolding on its border with Myanmar, across which some 70,000 Rohingya Muslims have fled," Reuters reported on Friday.

Despite the little attention the international audience pays to this travesty, Turkey, which has recently opened an embassy in Myanmar's largest city of Yangon, is following the crisis very closely. Amid aims to improve relations with Myanmar, Ankara is demanding a peaceful solution but escalating tensions and the recent killings of dozens of Muslims are raising concerns in Ankara, where officials recently said in a statement that, "We are deeply concerned about the civilian casualties and escalation of tensions in Myanmar's northern Arakan [Rakhine] state after last month's attacks."
RELATED TOPICS