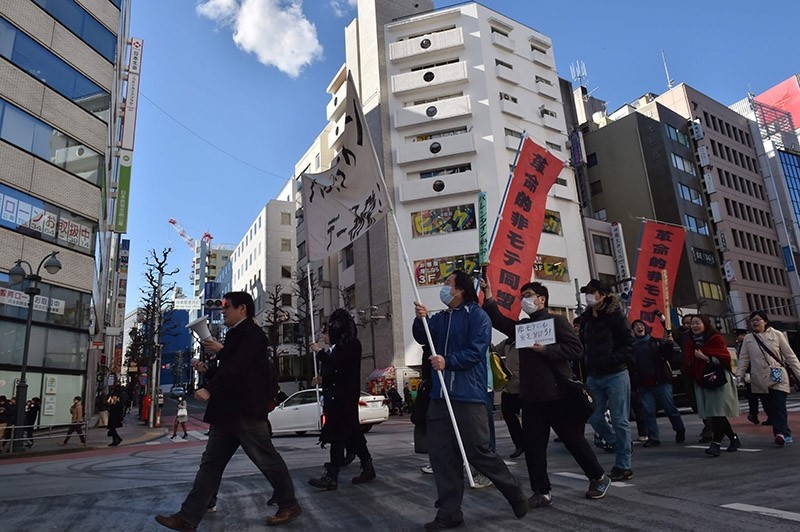 As Japan prepares to celebrate Valentine's Day, a cranky group of Marxist protesters have called for an end to public displays of love, claiming it hurts their feelings.

Members of 'Kakuhido', or the Revolutionary Alliance of Men that Women find Unattractive, unfurled a giant "Smash Valentine's Day" banner as the party-poopers set off to try and overthrow the annual celebration of romance.

The grumpy comrades elicited curious looks from passers-by in the trendy Shibuya district where they rallied against commercialism and chanted other buzz-kill slogans such as "public smooching is terrorism!"

"People like us who don't seek value in love are being oppressed by society," he added. "It's a conspiracy by people who think unattractive guys are inferior, or losers -- like cuddling in public, it makes us feel bad. It's unforgivable."

Previously, the killjoy group has also protested against "housewives who control Japan's future" as their hapless husbands work all hours at the office.

Valentine's Day in Japan is a huge money-spinner for the confectionery business as women are traditionally expected to buy chocolates for the men in their lives -- from lovers to work colleagues.

Men reciprocate a month later on White Day, a Japanese marketing brainwave dreamt up by confectioners in the 1980s to keep the cash tills ringing.

"The tradition of giving chocolates means you're always competing," said Akimoto, 33, blasting what his group calls the "passion-based capitalism" of Valentine's Day.

"You're judged by how many sweets you get. It's a business strategy by the chocolate capitalists, it's ridiculous."

Valentine's Day originated as an ancient Christian and Roman tradition and Akimoto fumed: "Religious overtones have been twisted and turned into a vehicle to make money."

Japan is experiencing a loss of mojo with couples apparently too stressed or busy to have sex, frustrating government efforts to raise the birthrate as policymakers struggle to cope with a shrinking population.

Akimoto claims the group's message has begun to hit home after 10 years of protests.

"Recently you hear of more people spending Christmas alone or women growing tired of Valentine's Day," he said. "We believe that through our fight, we've helped contribute to that social shift."

Kakuhido was founded in 2006 by Katsuhiro Furusawa, who began reading the Communist Manifesto after being dumped by his girlfriend and came to the conclusion that being unpopular with the opposite sex was a class issue, fueling his anti-Valentine message.

Akimoto offered some advice for would-be disciples of the spoil-sport group, which also protests White Day and Christmas.

"We're saying you don't have to enjoy Christmas or Valentine's Day," he said joylessly, adding that Kakuhido is also taking aim at Halloween.

"Just spend the day doing normal things. Our enemy is formidable, but we are ready for a long, drawn-out war."