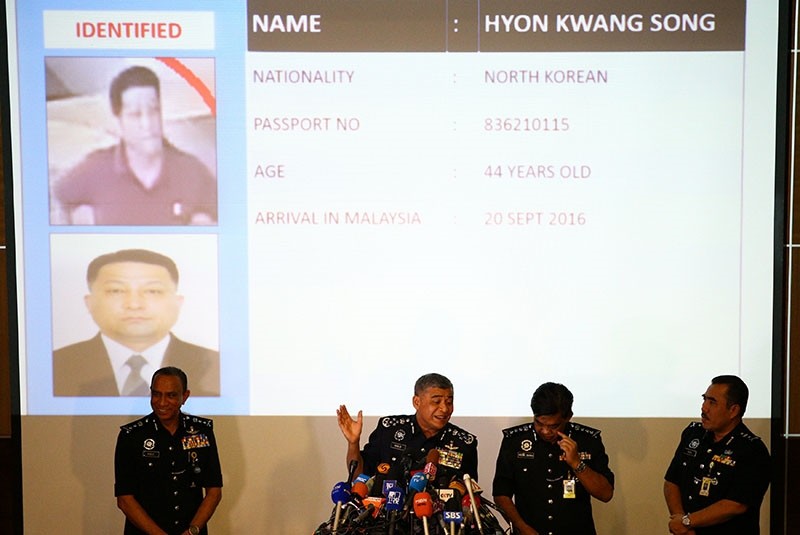 The banned chemical weapon VX nerve agent was used to kill Kim Jong Nam, the North Korean ruler's outcast half brother who was poisoned last week at the airport in Kuala Lumpur, police said Friday. The announcement raised serious questions about public safety in a building that authorities went 11 days without decontaminating.

"Our preliminary finding of the chemical that caused the death of Kim Chol was VX nerve," he said. Kim Chol is the name on the passport found on the victim, but a Malaysian official previously confirmed he is North Korea leader Kim Jong Un's older half brother.

Khalid told reporters that one of the two women accused of wiping the toxin on Kim's face was later sickened and suffered from vomiting. He declined to say which of the women — one Indonesian and one Vietnamese — had gotten sick.

Asked by local media whether people should avoid visiting the airport, Khalid said, "I don't know, I'm not the expert. We will get the experts to go to the location and to sweep it and see whether anything radioactive is still there."

The substance is "definitely illicit here," he added, saying that police were investigating how it was obtained.

Malaysian police also previously no one besides Kim Jong Nam had been sickened.

If VX was used, it could have contaminated not only the airport but anyplace else Kim had been, including medical facilities and the ambulance he was transported in. The nerve agent, which has the consistency of motor oil, can take days or even weeks to evaporate.

The death of Kim Jong Nam, whose daylight assassination in a crowded airport terminal seems straight out of a spy novel, has unleashed a diplomatic crisis that escalates by the day. With each new twist in the case, international speculation has grown that Pyongyang dispatched a hit squad to Malaysia to kill the exiled older sibling of North Korean leader Kim Jong Un.

North Korea has denounced Malaysia's investigation as full of "holes and contradictions" and accused the authorities here of being in cahoots with Pyongyang's enemies.

According to Malaysian investigators, the two female suspects coated their hands with chemicals and wiped them on Kim's face on Feb. 13 as he waited for a flight home to Macau, where he lived with his family.

He sought help from airport staff but he fell into convulsions and died on the way to the hospital within two hours of the attack, police said.

The case has perplexed toxicologists, who question how the two women could have walked away unscathed after handling a powerful poison, even if — as Malaysian police say — the women were instructed to wash their hands right after the attack.

Dr. Bruce Goldberger, a leading toxicologist who heads the forensic medicine division at the University of Florida, said even a tiny amount of VX nerve agent — equal to a few grains of salt — is capable of killing. It can be administered through the skin, and there is an antidote that can be administered by injection. U.S. medics and military personnel carried kits with them on the battlefield during the Iraq war in case they were exposed to the chemical weapon.

"It's a very toxic nerve agent. Very, very toxic," he said. "I'm intrigued that these two alleged assassins suffered no ill effect from exposure to VX. It is possible that both of these women were given the antidote."

He said symptoms from VX would generally occur within seconds or minutes and could last for hours starting with confusion, possible drowsiness, headache, nausea, vomiting, runny nose and watery eyes. Prior to death, there would likely be convulsions, seizures, loss of consciousness and paralysis.

VX is banned under the Chemical Weapons Convention, which North Korea never signed. The country is believed by outside experts to have the capacity to produce up to 4,500 metric tons of chemical weapons during a typical year, which it could increase to 12,000 tons per year during a period of crisis. Its current inventory has been estimated at 2,500 to 5,000 tons.

It is suspected of being particularly focused on mustard, phosgene, sarin and V-type chemical agents — substances including VX that are designed to poison through contact and remain lethal for long periods of time. The North's development of such agents has been of special concern because of fears it might try to put them in artillery shells for an attack on South Korea's capital, potentially threatening the lives of millions.

Joseph Bermudez, a well-known North Korea analyst, wrote an article for the respected 38 North website in 2013 that said the North is capable of not only employing "significant quantities and varieties of chemical weapons" across the Korean Peninsula but also using those weapons worldwide "using unconventional methods of delivery."

He also said there is a "growing body of evidence" indicating the North has shared chemical weapons capabilities with Syria, Iran and others.

The case has marked a serious turnaround in relations between Malaysia and North Korea. While Malaysia isn't one of Pyongyang's key diplomatic partners, it is one of the few places in the world where North Koreans can travel without a visa. As a result, for years, it's been a quiet destination for Northerners looking for jobs, schools and business deals.