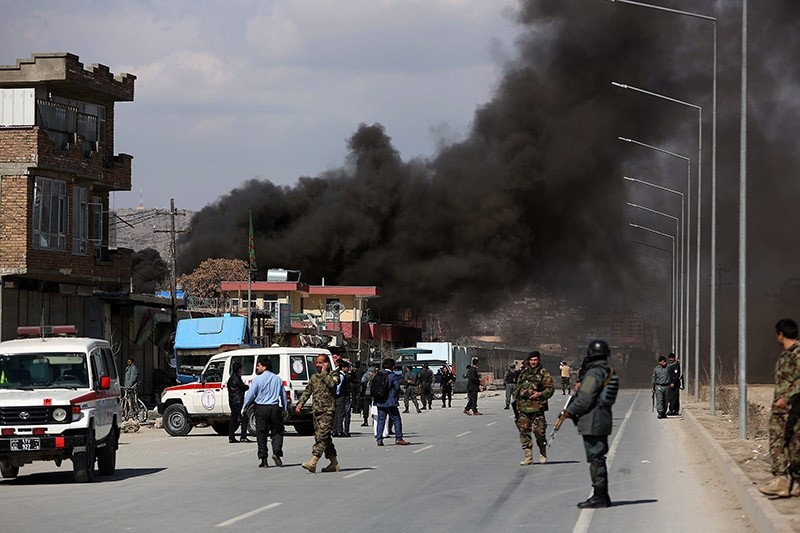 A pair of near-simultaneous Taliban suicide bombings struck the Afghan capital on Wednesday, targeting a sprawling police compound and offices of the country's intelligence agency and killing 16 people in all, officials said.

In the attack on the police compound, a suicide car bomber rammed his car into the gates of the complex, located in western Kabul. The explosion was followed by a gunbattle between police and several attackers who stormed into the compound, said Najib Danish, deputy spokesman for the Interior Ministry.

Thick black smoke rose above the police complex, and several rounds of small-arms fire and subsequent explosions were heard from inside, according the Mohammad Naser, a shopkeeper who has a store nearby. Dozens of windows were shattered on surrounding houses and shops, he added.

The compound includes Kabul's so-called Sixth Police Station and is located next to the country's military school, which might have been the original target, along with cadets attending classes there.

Hours later the gunbattle ended with all the attackers killed, said Sadiq Muradi of the Kabul police chief's office. Security forces were carrying out a clean-up operation following the attack, he added.

Wahid Mujro, the public health ministry spokesman, said 15 people were killed in the police compound and 43 were wounded.

The second attack in the Afghan capital took place in eastern Kabul, when a suicide bomber on foot detonated his explosives outside the offices of the intelligence service. One person was killed and another was wounded in that attack, Mujro said.

In a message to media, Taliban spokesman Zabihullah Mujahid claimed responsibility for both attacks.

It was not immediately clear how many gunmen were involved in the police station attack.

"We were in the dining room, eating lunch when a loud explosion happened. I couldn't see anything for a while," said Manizha, a policewoman who like many women in Afghanistan uses only one name.

She said she managed to escape from the compound as the gunbattle continued inside.

President Ashraf Ghani issued a statement condemning the attacks, saying that "terrorists and their alien masters once again tried to create an atmosphere of terror and fear in Kabul."

Ghani linked the attacks to the recent death of a senior Taliban commander, known as Mullah Salaam, in northeastern Kunduz province and said the insurgents are trying to attack urban centers to boost morale among their followers.

Meanwhile, the Taliban gained control Wednesday of local government headquarters in a district in northern Baghlan province, after almost three days of intense battles with Afghan security forces, according to local officials.

Abdul Satar Barez, the provincial governor, said he could not confirm that the whole district of Tala Wa Barfak has fallen to the Taliban but said a number of checkpoints have fallen to the insurgents amid clashes Wednesday.

A provincial security official said the security forces left their checkpoints and withdrew from the entire district, which is now in Taliban hands. The official spoke on condition of anonymity because he was not authorized to talk to the media.

Mujahid, the Taliban spokesman, tweeted that their fighters have overrun the Tala Wa Barfak headquarters.