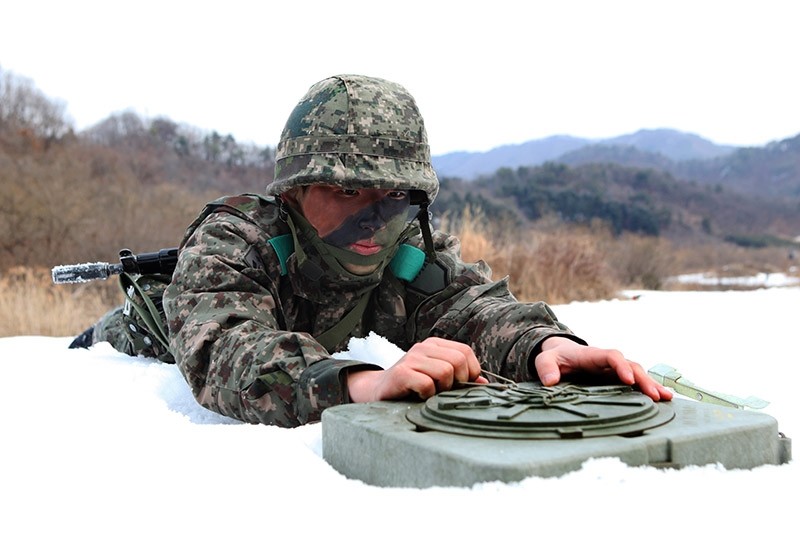 South Korea and the United States kicked off their annual, massive military exercises on Wednesday as North Korean leader Kim Jong-Un ordered his troops to prepare for a "merciless strike" against enemy forces.

The drills always raise tensions on the divided Korean peninsula and this year they come after the North's recent ballistic missile test and the assassination by nerve agent of Kim's half brother in Malaysia.

The spokesman said 3,600 US troops have been deployed for the Foal Eagle exercises, the first of the two drills that stretch over two months, but declined to provide a total figure.

South Korean Defense Minister Han Min-Koo "stressed the need to bolster the drills" in a phone call with his US counterpart James Mattis, who vowed "effective and overwhelming response" against any use of nuclear weapons, Seoul's defense ministry said in a statement.

Dozens of protestors gathered outside the US embassy in Seoul on Wednesday protesting the start of the exercises, claiming they would "bring the peninsula sharply closer to the brink of a nuclear war".

Pyongyang has long condemned the joint drills as provocative rehearsals for invasion, while Seoul and Washington insist they are purely defensive in nature.

Visiting the headquarters of an army unit, the North's leader Kim praised his troops for their "vigilance against the US and South Korean enemy forces that are making frantic efforts for invasion", the state-run Korean Central News Agency said Wednesday.

Kim also ordered the troops to "set up thorough countermeasures of a merciless strike against the enemy's sudden air assault", it said.

South Korea's acting president said Wednesday the country would respond with strong actions against any provocations made by the North and seek tougher UN sanctions against the isolated state.

"The government will strive to make the North realize the uselessness of its nuclear weapons" through a stronger alliance with the US, including the deployment of a US missile defense system, Hwang Kyo-Ahn said in a speech marking the anniversary of the country's independence movement against Japanese colonial rule.

The two allies agreed last year to install the Terminal High Altitude Area Defense (THAAD) system to counter growing nuclear and missile threats by the North, a plan that has angered Beijing, which fears it will undermine its own ballistic capabilities.

The South's defense ministry signed a land swap deal with retail giant Lotte on Tuesday for the stationing of THAAD and said it would push for its deployment this year.

China's foreign ministry said THAAD "jeopardizes the strategic security interests" in the region and warned of "consequences" against Seoul and Washington.

The most recent missile test on February 12 - the first since US President Donald Trump took office - showed some signs of progress in its missile capabilities, according to the South Korean military.