South Korea to send leaflets about Kim murder to N. Korea by balloon 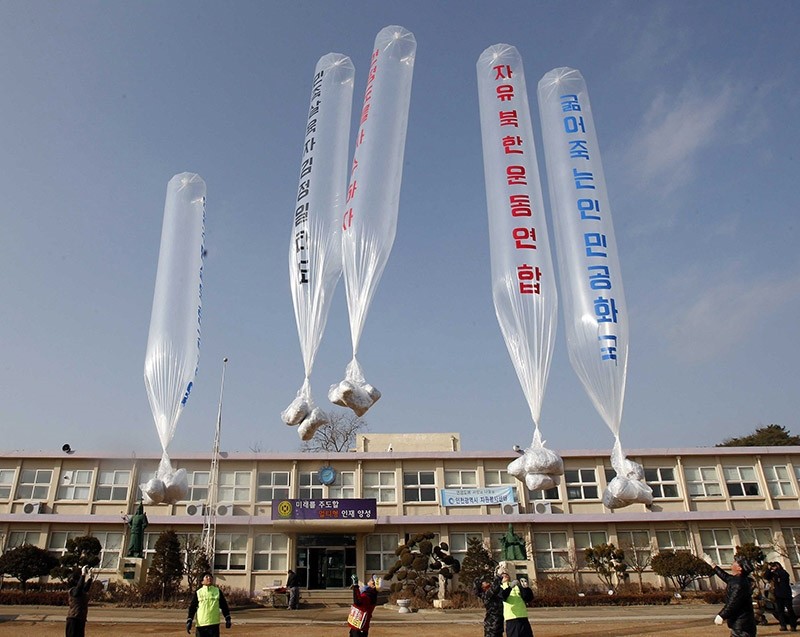 Former North Korean defectors living in the South and other conservative activists release balloons containing leaflets during a protest against the North's November 23 shelling on Yeonpyeong Island, on December 18, 2010. (Reuters Photo)
by Mar 02, 2017 12:00 am

South Korean activists will send millions of leaflets about the poisoning murder of the half-brother of the North's leader across the border by balloon, they said Thursday.

It is not clear how many North Koreans are aware of the fate of Kim Jong-Nam, who was killed with the nerve agent VX at Kuala Lumpur's international airport, allegedly by two young women acting on Pyongyang's orders.

The North has angrily denied involvement and accused Malaysia for colluding with South Korea to frame it, while only referring to the victim by a pseudonym, without clarifying his relationship with Kim Jong-Un.

The leaflets -- to be flown across the border by giant, gas-filled balloons -- contain details of the murder and pictures including one of a dying Kim Jong-Nam slumped in a chair at a clinic in the airport.

The text describes the North's leader as "a devil who killed his own brother".

"We will start launching the leaflets in mid March," said activist leader Park Sang-Hak, a defector who leads the Fighters For Free North Korea group.

The move was intended "to let our North Korean compatriots know the act of extreme brutality committed by Kim Jong-Un", he added in a statement.

News from the outside world is banned or heavily censored in the North, as the Kim dynasty rules the impoverished, isolated nation with an iron fist and pervasive personality cult.

The leaflets also contain assertions by Seoul's spy agency that Jong-Un had executed many Pyongyang officials and ordered the half-brother's murder to strengthen his grip on power.

The text claimed that Jong-Un - son of Kim Jong-Il's third wife - had ordered the assassination of Jong-Nam because some viewed him as having a better claim to inheriting the leadership as their father's first-born son.

Conservative South Korean activists, including many North Korean defectors, have sent leaflets northwards for years, infuriating Pyongyang, which has at times threatened military strikes in response.