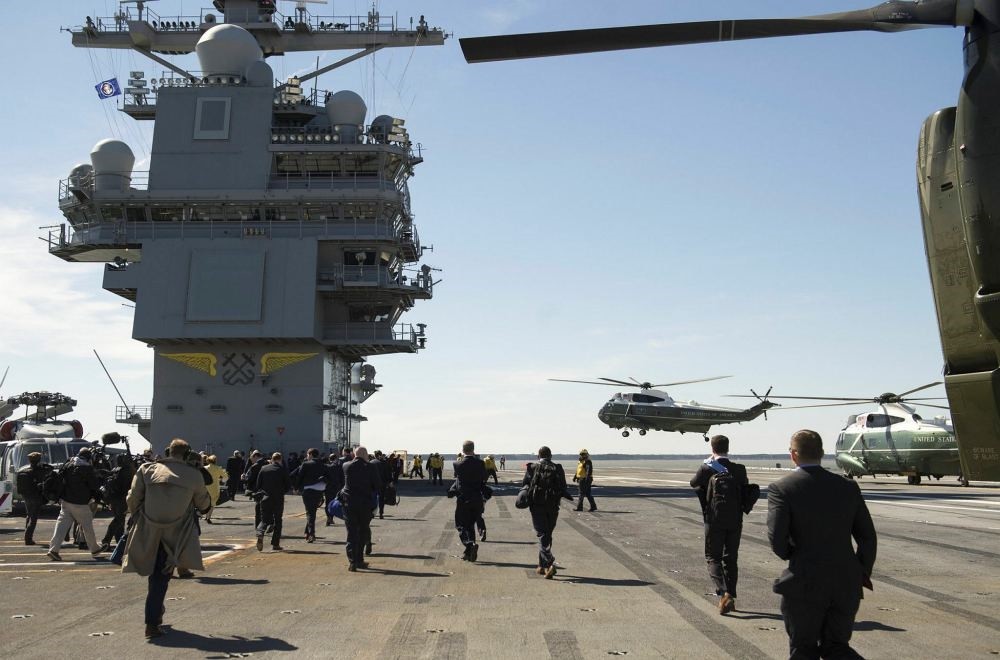 Marine One with US President Donald Trump aboard lands on the flight deck of the pre-commissioned USS Gerald R. Ford aircraft carrier in Newport News, Virginia, March 2. (AFP Photo)
by Compiled from Wire Services Mar 04, 2017 12:00 am
Acting South Korean President Hwang Kyo-ahn insisted Friday that deploying the American anti-missile system THAAD is a "vital defense measure," as China ramped up pressure on Seoul to abandon the plan.

Local news agency Yonhap cited industry insiders who fear the number of Chinese visitors could be halved. That would mean a loss of around $10 billion based on spending by the 8.06 million Chinese travelers to the South last year according to Korea Tourism Organization data.

Chinese state media suggested earlier this week that ties with South Korea might even be severed after a Lotte Group affiliate agreed a land swap deal for a THAAD site nearly 300 kilometers (186 miles) south of Seoul.

"As China's protest against the deployment is expected to escalate when the full-fledged steps begin, we will continue to keep watchful eyes on actions taken by Beijing, while expanding communication with China," Hwang was quoted by Yonhap, talking to ruling party (Jayuhangukdang or Liberty Korea Party) lawmakers.

"We will come up with necessary measures at the appropriate time," he said. The tourism ministry also held an emergency meeting Friday.

Both sides of the political aisle spoke out against China's latest action, including the main opposition center-left Minjoo Party of Korea that is tipped to provide the winner of this year's election to choose a successor to impeached President Park Geun-hye.

The liberal camp even sent a delegation to China last year amid calls for the THAAD decision to be deferred to the next administration - but floor leader Woo Sang-ho now admits Beijing has "gone too far."

There have also been concerns that Chinese consumers are being prevented from enjoying or encouraged to boycott South Korean products and entertainment, such as highly popular dramas and music stars.

The escalations follow China's aggressive expansion into the South China Sea by the building of military bases capable of hosting aircraft as well as weapon systems. The islands are being contested by Japan, which has the full support of U.S. President Donald Trump. The American president criticized China before even being elected, accusing it of artificially devaluating their currency and not being fair in making trade deals.

Trump had initially challenged the "One China" policy by receiving a phone call from the president of Taiwan, which China considers a rogue province; however he re-affirmed the relationship after taking office. He is however still concerned over Chinese activity in international waters and plans to increase American military spending considerably.

Touring the soon to be commissioned aircraft carrier USS Gerald R. Ford, Trump said before a crowd that it will be "a symbol of American strength." Wearing a naval cap and jacket given to him by the sailors, Trump went on to say:

"The proud dignity of this ship is a fitting tribute to Gerald Ford, the man and the president. Congratulations to all of the men and women who helped build it. This is American craftsmanship at its biggest, at its best, at its finest. […] and by the way we're going to soon have more coming. […] We will have the finest equipment in the world. […] There is no competition to this ship. It is a monument to American might that will provide the strength necessary to ensure peace."

In his first address to Congress, President Trump asked that they eliminate the defense budget sequester in order to launch a "great rebuilding of the United Stated Military and the United States Navy." He also called for a 12-carrier Navy.
RELATED TOPICS